Last night, me and my BFF Evelyn watched the 84th Annual Academy Awards. 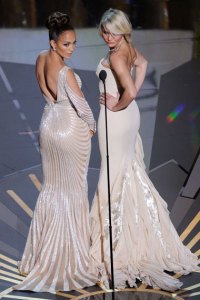 Lisa and Evelyn at the Oscars

As if you had to ask.

It was about honoring some good films and making a lot of catty comments about rich people who don’t know how to dress themselves.

You know who is adorable?  Bret McKenzie, who all good people as a member of The Flight of the Conchords.  He won an Oscar last night for best original song for Man or Muppet and he gave exactly the type of wonderfully sincere acceptance speech that you would expect from Bret McKenzie.

You know who else is adorable?  Jim Rash.  The script he co-wrote for The Descendants is overrated but it was still good to see Community’s Dean up there accepting an Oscar.

And you know who is really, really adorable?  The little Emma Stone.  Loved her dress and loved her whole little skit with Ben Stiller.

Jean Dujardin, Christopher Plummer, and Octavia Spencer all gave wonderful acceptance speeches and Uggie got to go on stage when The Artist won best picture!  That was so cute!

Much like the Golden Globes last month, the Academy Awards were a rather somber affair,  It was as if everyone couldn’t get over the fact that they had actually nominated Incredibly Loud and Extremely Close and everyone was muttering under their breath, “Let’s get this over with before anyone remembers that we nominated a film that not even those people at the Golden Globes were impressed by!”

As much as I enjoyed two of the nominees for best picture (The Artist and Hugo), respected one of them (The Tree of Life), and enjoyed another almost despite myself (The Help), the majority of the nominations this year went to movies that we will probably never watch again and to performers who will probably never have a year as good as this one.  Perhaps that is why the various Academy montages all seemed to feature scenes taken from films that received not a single Oscar nomination.  (More time was devoted to the latest Mission Impossible than to Extremely Loud and Incredibly Close.)  It just gave the whole ceremony a rather odd feel.  It reminded me of when I was in high school and the drama club would give out little trophies and certificates at the end of the year.  I received a little trophy for being the Best Actress in Advanced Theatre during my junior year.  I also got a certificate for “Biggest Flirt.”  (My acceptance speech, by the way, was: “Couldn’t it have been for best lay?”  Ahhh, High School.)

As host, Bill Crystal was pretty bleh and he kinda looked like Robert Blake from Lost Highway.

Whenever Rooney Mara popped up on screen, me and Evelyn would yell, “You need boobs to wear that dress, honey!”

Meryl Streep’s acceptance speech was long-winded and she came across as being a bit full of herself, I think.  Now I know that you’re saying, “Well, gee, Lisa, she’s the greatest actress ever so she’s earned the right to be full of herself!”  Actually, if you really pay attention to Streep’s performances, you’ll see that the main reason she has a reputation for being a great actress is because she never allows you to forget that she’s acting.

As I mentioned on twitter, Evelyn and I have decided that we were the Jennifer Lopez and Cameron Diaz of my living room.  We’re still debating on just who exactly was Cameron and who was J.Lo.

Everything is better with James Franco!