(Hi there!  So, as you may know because I’ve been talking about it on this site all year, I have got way too much stuff on my DVR.  Seriously, I currently have 178 things recorded!  I’ve decided that, on February 1st, I am going to erase everything on the DVR, regardless of whether I’ve watched it or not.  So, that means that I’ve now have only have a month to clean out the DVR!  Will I make it?  Keep checking this site to find out!  I recorded Empire of the Sharks, off of SyFy on August 5th, 2017!) 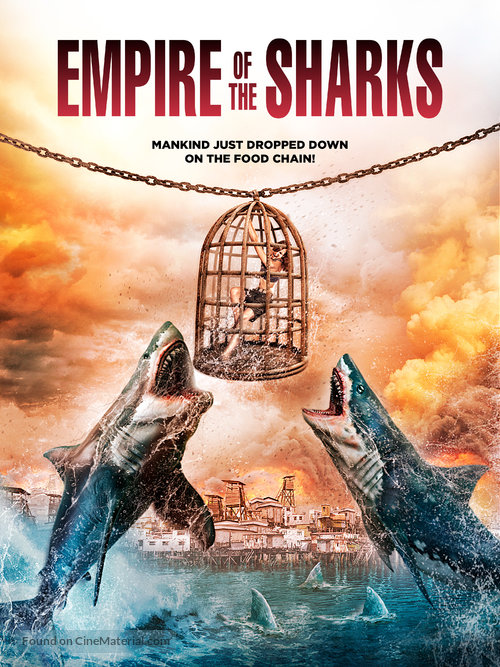 That’s to be expected, of course.  In fact, now that 98% of the world is underwater, we should probably be surprised that the future isn’t more wet than it actually is.  What survives of humanity now lives on floating, makeshift communities.  Some of them are doing better than others, of course.

A warlord floats out there.  His name is Ian Fien (John Savage).  With the help of his main henchman, Mason Scrimm (Jonathan Pienaar), Fien has several communities under his grip.  Everyone is required to pay Fien his tribute.  Failing to do so means getting attacked by the sharks that Scrimm has under his control.

(Once 98% of your planet is underwater, you learn not to laugh at the possibility of being eaten by a shark.)

However, Fien has finally gone too far.  He’s kidnapped Willow (Ashley de Lange), the daughter of a shark caller who may have inherited her family’s ability to control the sharks.  Her boyfriend, Timor (Jack Armstrong), sets out to rescue Willow but it quickly turns out that he’s not going to be able to do it alone.  Fien is simply too powerful and his fortress too well-defended by both men and sharks.  Timor is going to have to travel to a floating bar and recruit a team of misfits to help him both rescue Willow and free his people from Fien’s tyranny.

If the plot of Empire of the Sharks sounds familiar, that’s because it’s a prequel to 2016’s Planet of the Sharks.  It’s also an Asylum film.  Of course, The Asylum is best-known for the Sharknado franchise but I think that, if they don’t also develop a Planet of the Sharks franchise, they’ll be missing out on a huge opportunity.  One of the things that I liked about both Planet and Empire was the amount of effort that was put into creating the future.  Each floating community is its own little world and full of details that will reward sharp-eyed viewers.

(I know that some people online complained that everyone looked too good, considering that they were living in a post-apocalypse wasteland.  That may be true but here’s something to consider.  Do you really want to spend 90 minutes watching ugly people?)

Anyway, I enjoyed Empire of the Sharks.  The movie is pure fun.  (Just the fact that the main villains are named Fein and Scrimm should tell you a lot about the film’s sense of humor.)  It’s a cheerfully crazy movie, featuring CGI sharks and a nicely demented performance from John Savage.  Hopefully, during this year’s shark week, we’ll get a third installment in the Planet of the Sharks franchise.