Well, let’s get this over with…

(Seriously, if I ever get tired of “Stay supple!,” that’ll probably be my new catch phrase…)

As you my remember, way back in 2016, I reviewed the 10th season of The X-Files.  With the exception of the episode that featured Rhys Darby, I didn’t care much for it.   In fact, the episode that was set in Texas almost drove me to throw a shoe at the TV.  However, the 10th season did end with a big cliffhanger and, since I hate the idea of a story going unfinished, I knew I would have to watch the 11th season whenever it premiered.  And I also knew that I’d have to review it because that’s what I do.

Well, tonight, the 11th season premiered.  Armed with as much knowledge as one can hope to gain from scanning Wikipedia, I twice watched My Struggle III.

The episode began with a lengthy monologue from the Cigarette Smoking Man (William B. Davis), in which he talked about how, if the American people knew about what was truly going on in the darkest corners of the government, there would be riots in the streets.  Personally, I love conspiracy theories and I’m generally opposed to all forms of controlling legal authority so I enjoyed that part of the show.   The episode managed to work footage of every U.S. President except for Obama into the opening conspiracy montage.  Personally, if I had edited the show, I would snuck Obama in there just to mess with people and their expectations.  But that’s just me!

Anyway, as much fun as that little conspiracy monologue may have been, I was more concerned with how the show was going to deal with the fact that the world literally ended at the end of season 10.  Well, it was quickly revealed that nothing that happened during My Struggle II actually happened.  Instead, it was all just a vision that Scully had.  Apparently, it’s a premonition of what will happen unless Mulder … does something.

Does what exactly?  I’m not sure and, to be honest, I’m not really sure that the show does either.  I understand that this episode is meant to be part of a bigger mythology and, as a result, it was supposed to be a bit open-ended.  However, as I watched My Struggle III, I got the feeling that the episode was mostly just something that was hastily whipped up so that the show could do away with season 10’s disastrous finale.  And it was hard not to feel that, narratively, the show took the easy way out.

The majority of the episode was made up of Mulder driving his car from location to location, searching for the Cigarette Smoking Man.  This led to Mulder breaking into a mansion and having a conversation with Mr. Y (Alexandre Campion) and Erika Price (Barbara Hershey) about aliens and the secret history of the world.  To be honest, it was kind of boring and it didn’t really hold my attention.

Don’t fear, twitter!  There’s always a good chance that next week’s episode will open with the Cigarette Smoking Man revealing that he actually isn’t the father or maybe it’ll just turn out that someone else was having a vision.  By dismissing season 10’s cliffhanger as just being a dream (or a vision or premonition or whatever), The X-Files has reminded us that nothing on the show actually means anything.  Who needs to maintain continuity or narrative integrity when you can just shrug and say, “Well, y’see, it’s all a part of the conspiracy…”

(As I watched tonight’s episode, I found myself thinking about Twin Peaks: The Return.  No matter how weird or convoluted Twin Peaks got, I still never doubted that David Lynch did have a definite destination in mind.  That’s not a feeling that I got from tonight’s episode of The X-Files.)

So, with that in mind, I will tune in next week to see if episode 2 is any better than episode 1.

Last night, as thunder rumbled outside and the skies were lit up by lighting, I curled up on the couch and I watched the latest Lifetime original film, Manny Dearest! 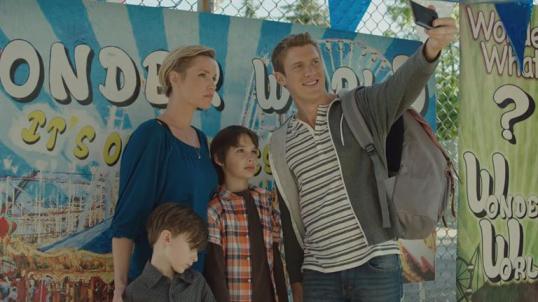 A Canadian film called Manny Dearest?  As soon as I saw the title, I assumed that it had to be a sequel to Degrassi: The Next Generation, one that would follow Manny Santos as she searched for love and success in Hollywood.

(Before you say that was a silly assumption on my part, just consider the number of Degrassi actors who regularly appear on the Lifetime network.)

Anyway, it turned out that I was wrong but I was already live-tweeting the movie so I kept watching.

Karen (Ashely Scott) needs someone to help watch her two sons.  Alex (Mitch Ryan) is a male nanny, otherwise known as a manny.  Now, if this was a Hallmark film, Karen and Alex would fall in love and Alex would end up dumping her fiancée, a recovering alcoholic named Greg (Woody Jeffreys).  But, since this is a Lifetime film, Alex turns out to be just a little crazy.  Not only does he become obsessed with Karen and plot to get Greg out of the picture but he also teaches Karen’s sons some questionable lessons about how to deal with bullies.

Mitch Ryan did an excellent job playing Alex.  Even though he was crazy and a murderer and he regularly drugged other people, Alex was still strangely likable.  Last night, the majority of twitter was Team Alex.  We especially enjoyed it when he scared the Hell out of a bully who was giving Karen’s son a hard time.  Take that, bully!  Add to that, Alex cooked, he did the dishes, he cleaned the house, and, whenever he showed up at the house at 3 in the morning, he was very careful about not waking anyone up.

My favorite character was Cori (Jordan Largy), a single mother who took one look at Alex and decided that she liked what she saw.  The thing I liked about Cori is that she always said exactly what was on her mind and she didn’t let anything hold her back.  Cori was the type of person who, when she brought her daughters over to play with Karen’s sons, greeted Alex by saying, “We thought we’d come by for a quickie.”

At this point, it’s a bit of a cliché for me to praise a Lifetime film for taking place in a nice house but, seriously, Karen had a really nice house.

I guess some people would say that it was a problem that the villain was a hundred times more likable than the people he was menacing but not me.  This is was a fun and entertaining Lifetime movie.  As far as I’m concerned, it all worked.

At one point, when Alex tells Cori that he’s not interested, Cori responds with, “Your loss.”  I once said the same thing while breaking up with someone and I felt good about myself for a whole month afterward.

I like to think that, between watching Degrassi and Lifetime films like this one, I’ve learned a good deal about Canada.  For me, the most Canadian moment of Manny Dearest came when the police approached Alex and, despite having guns, did not open fire on him.  Restraint, it’s very Canadian.