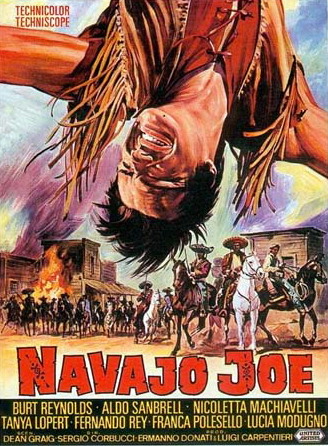 Duncan (Aldo Sambrell) and his gang are the most ruthless and feared outlaws in the old west.  When first seen, they are destroying a Navajo village and shooting everyone that they see.  Duncan even steals a pendant from a young Indian woman.  When that woman’s husband, Joe (Burt Reynolds), discovers what has happened, he sets out for vengeance.  With Ennio Morricone’s classic score playing in the background, Joe kills one gang member after another.  When Duncan and his gang lay siege to the town of Esperanza, Joe approaches the townspeople and offers to defend them.  His price?  “One dollar a head from every man in this town for every bandit that I kill.”

Following in the footsteps of his friend and fellow television star, Clint Eastwood, Burt Reynolds went to Italy in the 1960s and made a spaghetti western.  Navajo Joe was his second starring role, after Operation CIA.  Reynolds has always described Navajo Joe as being one of the worst movies ever made but, with the excepton of Deliverance, Burt says that about every film that he has ever made.  (Burt has also complained that the wig he wore in Navajo Joe made him look like Natalie Wood, which is true.)  While it never reaches the height of some of Sergio Corbucci’s other westerns, Navajo Joe is a frequently exciting movie, featuring one of Morricone’s best scores and a lead performance that is never as bad as Burt claims it was.  At first, it is strange to see Burt Reynolds playing such a grim and stoic character but, by the time he is throwing dynamite at Duncan’s gang, he has grown into the role and proven that he could actually play something other than a giggling good old boy.  As usual for a Corbucci western, both the outlaws and the greedy and ungrateful townspeople stand in for capitalism run amok. Like many spaghetti protagonists, Joe is an outsider who fights to save a town full of cowardly people who will never accept him.  As Joe explains, his ancestors were in America long before any of the townspeople’s ancestors.  America is his land but the forces of progress and greed are robbing him of his home.

Navajo Joe may not be a classic but it’s a solid western featuring one of Burt Reynolds’s most underrated performances.  If you have ever wanted to see Burt Reynolds smile while scalping a man, Navajo Joe is the film to see.