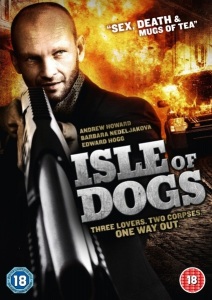 No, this is not the slow-moving Wes Anderson film from a few years back.

Instead, this is a film about a London crime boss named — don’t laugh — Darius (Andrew Howard).  Darius has an anger problem and it is not helped by all of the cocaine that he snorts at his club.  He also has a Russian wife named Nadia (Barbara Nedeljakova), a former prostitute who Darius says that he rescued.  Darius is insanely jealous.  When he suspects Nadia is having an affair, he takes the man who he suspects was her lover out to the countryside and, after a lot of yelling, eventually gets around to executing him.  The only problem is that Darius got the wrong guy!

Instead, Nadia’s lover is a low-level hood named Riley (Edward Hogg).  Nadia is waiting for Riley to show up at Darius’s country estate and take her away from her life as the trophy wife of an abusive psycho.  When a masked intruder shows up with a knife, things start to get more complicated.

Unfortunately, just because things get more complicated, that doesn’t mean that they get any more interesting.  For a film featuring frequent violence, graphic gore, and more than a little sex, Isle of Dogs is a remarkably dull affair.  A huge part of the problem is that the characters are never that interesting so you really don’t care when they lose a limb or are forced to commit a murder.  Darius, Nadia, and Riley are all stereotypes who will be easily recognized from other, better British gangster films.  At first, it seems like Andrew Howard’s energetic cursing might make bring some life to Darius but after a while, even Darius’s temper gets old.  I was hoping that the film would at least make good use of London but instead, the majority of the film takes place at Darius’s country estate, which looks like every other country estate.

There are some twists to the plot.  The film makes liberal use of flashbacks and flashforwards, though they don’t add up too much.  For some reason, there’s a scene of a naked Darius practicing his golf swing.  Someone loses an arm and barely flinches.  The film probably would have been better if Wes Anderson had directed it.  At least he would have brought along Bill Murray.


Road Games is an odd film.  On the one hand, it’s such a slow-moving film that there’s really not a whole lot of plot to describe.  On the other hand, what little plot that does exist all hinges on a big twist that I really can’t reveal.  Considering how offended some people get when I reveal the end of a Lifetime film on this site, I can only imagine the reaction if I spoiled this film.

Jack (Andrew Simpson) is a depressed British guy who is stranded in France.  He’s been hitchhiking across the country, hoping to make his way to Calais so that he can catch a ferry back to the UK.  Oddly, he’s traveling with no bags.  When we first meet Jack, he’s frustrated because nobody is willing to stop and pick him up.

Jack does eventually meet another hitchhiker, Veronique (Josephine de la Baume).  Despite the fact that Jack speaks little French and Veronique speaks little English, they have an immediate chemistry.  Veronique even lets Jack know why nobody wants to pick him up.  Apparently, there’s a serial killer in the area!

Shortly afterwards, a car actually does stop.  The owner of the car, Grizard (Frederic Pierrot), offers them a ride.  Jack quickly gets in the car but Veronique is weary of the rough-spoken Grizard and only reluctantly gets in the back seat.  They drive.  Grizard asks way too many personal questions.  He stops to pick a dead rabbit off of the road.  He gets mad when Jack tries to turn on the radio.  He also mentions that, because of a strike that neither Jack nor Veronique had heard about, there are no ferries from Calais.  He offers to let Jack and Veronique stay at his home for the night.  Though Veronique is reluctant, Jack readily agrees.

And that’s all I can tell you about the plot!  There’s a really big twist and it’s actually fairly clever.  But, my God, it takes forever to get there.  Road Games is a very slow film.  I know some of that was to build up suspense and the film is certainly not a failure but it’s still hard not to feel that Road Games was basically a terrifically effective 20-minute short film that was unnecessarily padded out to 95 minutes.

Road Games did the festival circuit in 2015 and got a release earlier this year.  It’s currently on Netflix and I guess I would give it a partial recommendation, especially if you’re a fan of the horror road genre.  There was a lot I did like about the movie: the cinematography is gorgeous and the original score is evocative of the best of giallo.   The acting is okay, though Barbara Crampton is really the only stand-out in the cast. Throughout the film, the characters speak in a combination of French and English and Road Games makes good use of the language barrier to keep us off-balance.  (How much is Jack understanding? we constantly wonder.)  But the film itself is just so slow!  I’ll be curious to see what director Abner Pastoll does next.  I just hope his next film has a steadier pace. 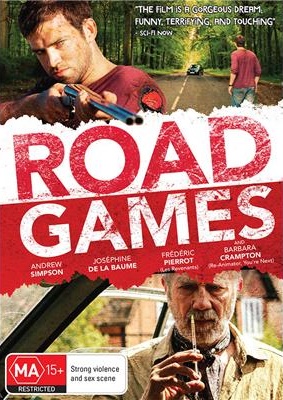