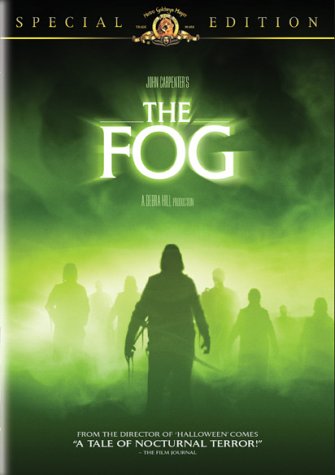 Mr. Machen is a resident of Antonio Bay, California, a coastal town that was founded with the help of gold stolen from a ship that was owned by a wealthy man named Blake (Rob Bottin). Blake wanted to start a leper colony. Instead, he was betrayed by six sailors who sank Blake’s ship, stole the gold, and used it to start the town of Antonio Bay.

At 12 midnight, on the day that the town is to celebrate its 100 anniversary, strange things start to happen. Windows shatter. Masonry falls from walls. A thick fog rolls across the ocean and seems to move from house to house. Inside the fog are several angry spirits, led by Blake. They not only want their gold back but they also want to take six lives as a way of getting revenge on the six conspirators who stole their gold and sank their ship.

It all starts with knock at the door and, if you look out a window, maybe you’ll see a dark shadow standing in an all-enveloping fog. Answering the door is a mistake. At the same time, so is not answering the door. It’s not easy to escape the vengeful spirits in the fog. 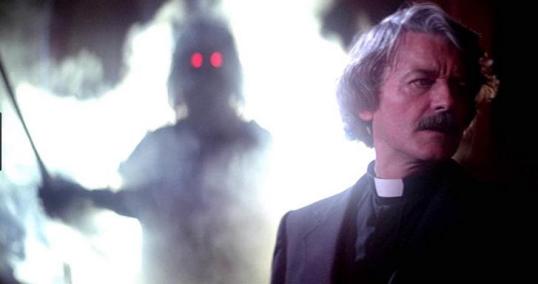 The Fog plays out like a disaster film, albeit one with a supernatural twist. The film follows several characters who are trying to survive the night and the majority of them don’t even meet until the final half of the film. There’s a truck driver (Tom Atkins) and a hitchhiker (Jamie Lee Curtis). There’s the alcoholic priest (Hal Halbrook) and the chairwoman (Janet Leigh) of the anniversary committee. Nancy Loomis, who co-starred with Curtis in Carpenter’s Halloween, plays an administrative assistant while Carpenter’s wife, Adrienne Barbeau, plays the local radio DJ whose son is briefly targeted by the fog. There’s even a coroner named Dr. Phibes!

In fact, the whole film is full of references to other films. The Fog finds John Carpenter in a rather playful mood, with characters named after Carpenter associates like Dan O’Bannon, Tommy Wallace, and Nick Castle. There’s even a mention of Arkham, the fictional New England town that served as the setting for many of H.P. Lovecraft’s stories.

42 years after it was made, The Fog holds up as a very well-told ghost story. I mean, fog is just creepy in itself. Then you add in a bunch of silent shadows standing in the fog and it gets even scarier! For the most part, the actors all do a good job playing rather thinly-drawn characters. Tom Atkins is always fun to watch! The true stars of the film, of course, are the ghosts and they will definitely give you nightmares.

The Fog is a good film for Halloween viewing so watch it and don’t answer the door!

(Don’t just take my word for it!  Be sure to read Leonard’s review of The Fog!)

One response to “Horror Film Review: The Fog (dir by John Carpenter)”