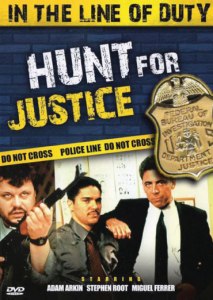 When New Jersey State Trooper Philip Lomonaco (Dan Lauria) pulls over a car for having mud on its license plate, he doesn’t know that the car is being driven by two members of the United Freedom Front, a group of left-wing revolutionaries.  While Lomonaco talks to Tom Manning (Miguel Ferrer), Dickie Williams (Dell Yount) opens fire.  Lomanaco is killed and Tom and Dickie flee to their safehouse in New England.  While the United Freedom Front plots their next series of bombings and bank robberies, Lomonaco’s ex-partner (Nicholas Turturro) teams up with an FBI agent (Adam Arkin) to track down the terrorists and get justice for his fallen friend.

Hunt For Justice was the ninth of NBC’s In The Line of Duty films.  The previous films featured religious cults, anti-tax protestors, drug lords, and mobsters.  In this one, the antagonists are all former 60s radicals who are still trying to overthrow the system.  The FBI views the United Freedom Front as being a threat to national security while Lomonaco’s partner just wants to make sure that Lomonaco’s death won’t go unpunished.  Dan Lauria was actually a mainstay of the In The Line of Duty films, appearing previously in A Cop for the Killing and and Ambush in Waco.  (Nicholas Turturro was previously featured, on the other side of the law, in Mob Justice.)  Since most people who watch this film will probably remember Lauria as being Kevin Arnold’s father in The Wonder Years, everyone will want his killers to be brought to justice.

As with the previous In The Line of Duty movies, the action is evenly divided between law enforcement and the criminals that they’re pursuing.  At first, Miguel Ferrer seems like odd-casting as a leftist who admires Che Guevara but he gives a good performance as someone who regrets some of the decisions that he made in the past but who knows that he can’t change them now.  Melissa Leo is also very good as his wife.  Stephen Root and Dean Norris, two other actors who you would not necessarily expect to see playing left-wing revolutionaries, are cast as the other members of the United Freedom Front and Hunt For Justice does a good job of contrasting their middle class lifestyles with their revolutionary rhetoric.  One of the ironies of the film is that the revolutionaries are leading much more comfortable and financially-stable lives than the men who are trying to hunt them down.  In fact, the main problem with the movie is that the revolutionaries are so interesting that it’s always a letdown when the action shifts over to Turturro and Arkin, whose characters are far less interesting.  Arkin and Turturro go through the expected paces.  The FBI doesn’t like it when local cops try to interfere with their investigations.  Who knew?

Hunt for Justice is a pretty standard In The Line of Duty movie but no movie featuring Miguel Ferrer, Melissa Leo, and Stephen Root is ever going to be a total loss.  The cast is the best thing that Hunt For Justice has going for it.

One response to “In the Line of Duty: Hunt For Justice (1994, directed by Dick Lowry)”