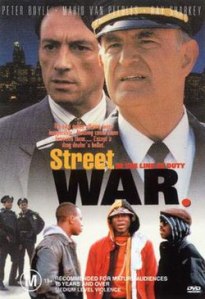 Street War, the fifth In The Line of Duty movie to be produced by NBC, takes place in Brooklyn.  Raymond Williams (Mario Van Peebles) and Robert Dayton (Michael Boatman) are two uniformed officers trying to keep the peace in the projects.  When Raymond is shot and killed in a stairwell, everyone knows that drug dealer Justice Butler (Courtney B. Vance) was responsible but no one can prove it.

The case is assigned to two detectives, Dan Reilly (Peter Boyle) and Victor Tomasino (Ray Sharkey).  Reilly is a veteran cop who is just a few months away from retirement.  Tomasino is the son of a “made man” who can’t understand why the drug lords in Brooklyn aren’t as interested in keeping the peace as the old Mafiosos were.

When Justice leaves Brooklyn so that he can hide out with his family in South Carolina, Reilly and Dayton follow him down there and discover that people in South Carolina distrust the cops just as much as people in Brooklyn.  Meanwhile, back in Brooklyn, Justice’s second-in-command, Prince (Morris Chestnut), tries to keep an all-out war from breaking out.

Prince and Tomasino take turns narrating the movie.  Prince talks about the reality of trying to restart your life after doing time in prison while Tomasino complains that “the animals” have taken over the city.  (Because this was made for television, “Animals” is Tomasino’s go-to label for anyone he dislikes.  Anyone with any experience with the police will know what word he is actually thinking.)  While Chestnut gives a restrained and thoughtful performance, Ray Sharkey shouts his lines and snarls whenever he’s onscreen.  Though it’s not always evident in this movie, Sharkey started out as a talented actor who played small roles in several independent films before starring in The Idolmaker.  Unfortunately, Sharkey was also a heroin addict whose once promising career was derailed by a series of arrests and jail sentences.  He looks thin and tired in Street Wars and, one year after the film aired, he would die of complications from AIDS.

With Sharkey yelling his lines, it falls on Peter Boyle to play the voice of reason in Street War.  Dan Reilly is a cliché, the weary cop who still wants to make the world a better place and who is just a few days away from retirement.  But Boyle does a good job playing him and brings his own natural gravitas to the movie.

Dick Lowry, who directed the first three In The Line of Duty movies, returns for this one and he keeps the action moving.  Street War is significantly more violent than the previous movies, with even two children getting shot onscreen.  The story itself is a predictable and Tomasino’s casual racism can be hard to take (even if he does eventually called out about it) but, thanks to the performances of Boyle, Boatman, Chestnut, and Vance, Street War is an improvement on Mob Justice and an adequate entry in the series.

Street War would be followed by two movies about FBI sieges, The Siege at Marion and Ambush in Waco.  Since I’ve already reviewed both of those, I will be moving onto In the Line of Duty: The Price of Vengeance tomorrow.

One response to “In the Line of Duty: Street War (1992, directed by Dick Lowry)”