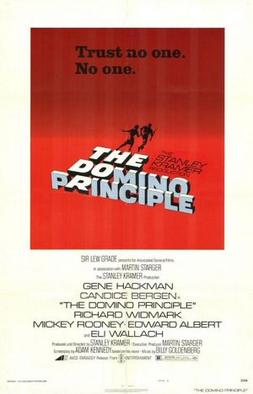 Roy Tucker (Gene Hackman) loyally served his country as a part of a “search and destroy” team in Vietnam but when he returned home, he discovered that America didn’t appreciate his sacrifice.  When he was convicted of murdering his wife’s abusive first husband, he was tossed in prison.  But now, two mysterious men (Richard Widmark and Edward Albert) have offered Tucker a chance to escape from prison and reunite with his wife (Candice Bergen) in Costa Rica.  The only catch is that they also expect Tucker to do a job for “the Organization” and assassinate an unidentified target.  As Tucker discovers, The Organization has been watching and manipulating him entire life, setting him up for this very moment.  Every small event in Tucker’s life led to another event that eventually sent him to both the war and to prison.  It’s almost like a game of dominos.  And we have a title!

The Domino Principle gets off to a good start, with a black-and-white montage of actual assassinations and then an opening credit sequence that features someone placing dominos over pictures of Roy Tucker at different ages.  (I am guessing that actual childhood photos of Gene Hackman were used because even the baby pictures feature the Hackman squint.)  However, the scene immediately following the credits features Gene Hackman and Mickey Rooney as cellmates and the film never really recovers.  Though they were both talented actors, Gene Hackman and Mickey Rooney don’t seem as if they belong on the same planet together, let alone sharing a prison cell in a grim and downbeat political thriller.  Hackman is his usual surly self, while Mickey seems like he’s going to try to get the entire prison to put on a show.  The film tries to do some unexpected things with Mickey’s character but it doesn’t change the fact that he’s Mickey Rooney and he just doesn’t belong here.

As for the rest of The Domino Principle, it’s slow and ponderous.  Best known for earnest social issue films like The Defiant Ones and Guess Whos’ Coming To Dinner, Stanley Kramer is the wrong director for a film that aspires to duplicate the conspiracy-themed atmosphere of other 70s thrillers like The Parallax View and Three Days of the Condor.  For all the time that film takes to build to its obvious conclusion, Kramer doesn’t even bother to identify who Tucker is supposed to kill or why the Organization wants him dead.  Though he seems like he should be a good choice for the lead role, Gene Hackman goes through the movie on autopilot.  Perhaps he was overwhelmed to be sharing a prison cell with Mickey Rooney or to be playing the husband of Candice Bergen, who the film unsuccessfully attempts to deglamorize.

Sadly, this would be one of Kramer’s last films.  He followed it up with The Runner Stumbles, which starred Dick Van Dyke (!) as a conflicted priest, and then went into semi-retirement.  (A few attempts to return to directing failed.)  Kramer spent his twilight years writing about movies for The Seattle Times.  Before his death in 2001, he also published a very entertaining autobiography, A Mad Mad Mad Mad World: A Life in Hollywood, which I recommend to anyone interested in the history of Hollywood.

2 responses to “The Domino Principle (1977, directed by Stanley Kramer)”