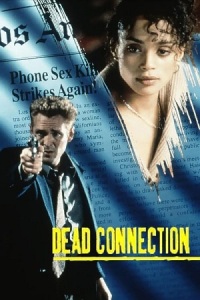 A former boxer and phone sex addict (played by real-life boxer Gary Stretch) is picking up women in Los Angeles, taking them to cheap motels, and beating them to death. Detective Matt Dickson (Michael Madsen, with blonde hair) is a burned out homicide cop who finds himself investigating the murders. It doesn’t take Dickson long to figure out that the killer is using the names of former boxing champs when he checks into the motels. He also figures out that the boxer has phone sex before and after the killing. That’s a lot but it’s not enough to solve the case. To do that, he’ll have to team up with a journalist (played by Lisa Bonet) who has personal reasons for wanting to take down the killer.

Back in the 90s, the main reason that I watched Dead Connection was because I had a hopeless crush on Parker Posey and she was listed as being one of the stars of the film. Parker does appear early on in the film and is just as funny and appealing in her small role as she was in bigger parts in other movies. Unfortunately, Parker gets killed pretty early on in the movie. That traumatized me the first time I saw the movie.

After Parker dies, the main reason to watch the movie is to see what Michael Madsen can do with his clichéd role. It turns out that Madsen can do a lot, even though there’s nothing unusual about the character on paper. Madsen just had the right look and the right style of acting for neo-noirs like this one. Even in a movie like this one, Madsen makes the whispering and the arched eyebrow seem cool and natural. Judging from her performance here, Lisa Bonet should have been a bigger star too. Just as with Madsen, there’s nothing unusual about her role but she still plays it with a lot of conviction.

The main problem with Dead Connection is that it reveals the identity of the killer in the first few minutes and it’s hard to believe that it would take the police a particularly long time to track him down. The minute it was learned that he was using the names of boxers to check into motels, that should have been the end of it for him. Instead, the movie dithers around for a good 90 minutes before finally ending on a predictable note. Despite the script’s flaws, Dead Connection is competently directed by Nigel Dick, who was also responsible for several music videos in the 80s and the 90s. Perhaps that explains why Tears for Fears’s Curt Smith has a tiny role as a desk clerk.

In the U.S., the film was released under the title Dead Connection, playing up the phone sex angle. In Europe, the focus was instead put on the killer’s boxing career and the film was called Final Combination, which made it sound like it was a movie about safecrackers. Neither title is really great but I prefer Dead Connection.

One response to “Dead Connection (1994, directed by Nigel Dick)”