If you watch the 1983’s The Final Terror, be prepared to frequently hear the names of the film’s characters.  For a slasher film about a bunch of campers wandering through the forest, The Final Terror has a surprisingly large cast and they all spend a good deal of time walking around and yelling out each other’s names.  Somehow, people keep getting lost even though they know that there’s a killer out there and they all really should be sticking together.

Interestingly enough, for a slasher film, there aren’t that many deaths.  The majority of the cast survives.  Even the most obnoxious of the campers, the one who seems like an obvious victim, manages to make it through to the finale.  I guess we should be happy that most of them survived and this was apparently their final terror.  The majority of the campers were teenagers and if you’re having your surviving your final terror when you’re not even old enough to drink yet …. well, consider yourself lucky.

The Final Terror is set up like an entry in the Friday the 13th franchise but it’s never anywhere close to being as sleazy as those films.  Whether that’s a good or a bad thing depends on what you, as a viewer, want in terms of a wilderness slasher film.  If you want lots of sex, blood, and people making stupid decisions, The Final Terror will probably bore you to death, despite the fact that it includes all three.  If you want a relatively realistic film about being lost in the wilderness while being stalked by an unseen killer, you’ll probably appreciate The Final Terror.  This film was directed Andrew Davis, who went on to direct several big budget Hollywood action films.  Before he became an action director, though, he worked as an assistant to cinematographer Haskell Wexler on the semi-documentary Medium Cool.  Davis brings that realistic style to The Final Terror.  Even though the film does feature some familiar faces, it’s easy to believe that you’re just watching a bunch of campers trying to survive for the weekend.

As for the cast, Rachel Ward plays one of the leaders of the campers.  Joe Pantoliano makes an early appearance as the creepy Eggar.  Daryl Hannah plays Windy.  Mark Metcalf plays another camper named Mike.  The entire ensemble actually does a pretty good job.  As I said, you really do believe that the majority of the cast are delinquent teenagers who have been sent on a camping trip.  When they work together to keep someone from bleeding to death, it almost feels like an educational film.  “Because the campers worked together,” you can imagine a narrator saying, “they might survive The Final Terror.”

The Final Terror is not bad, though I have to admit that I like my 80s slashers to be a little bit more sordid.  But for what it is — an attempt to take a realistic approach to a genre that is regularly held in dismissive disdain — The Final Terror works surprisingly well.  As captured by Andrew Davis, the wilderness is both beautiful and terrifying.  You’ll never catch me camping! 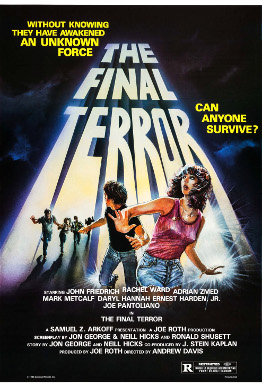 One response to “The TSL’s Grindhouse: The Final Terror (dir by Andrew Davis)”