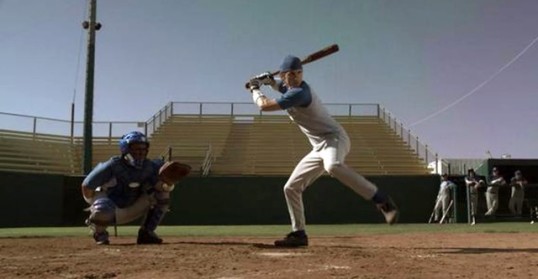 The MLB regular season has come to an end and right now, I’m so thankful for the Orioles.

Why?  Because I’m a Rangers fan and the Orioles 52-110 record is the only thing keeping my Rangers from havin the worst record in the American League.  This season, the Rangers went 60-102.  In all of major league baseball, only the Orioles and the Diamondbacks managed to do worse.  The Rangers will not be going to the World Series this season.  We won’t be anywhere close.  The Astros might make it.  They’re playing White Sox later today.

I’m a true baseball fan, though.  True baseball fans have faith.  It’s been a long since the Rangers had a winning season and many of my favorite players have been traded to other teams.  (I’m still crying about Elvis playing for the Athetlics.  ELVIS!)  We’ve been struggling for a while but next season, we’ll turn things around.  I have faith.

Faith is also the main theme of One Hit From Home, a baseball movie that I watched last night.  One Hit From Home is about Jimmy Easton (David Aaron Stone), a baseball player who was the best curve ball hitter in the league until career was cut short by a knee injury.  When Jimmy gets into a bar fight, he’s given two options.  He can either go to jail or he can coach a college baseball team.  Deciding to coach, Jimmy returns to his hometown, hooks up with his ex-girlfriend, mentors a troubled a player, deals with his part, and does a lot of praying.

One Hit From Home was really predictable and, because it was a Pureflix film, more into religion than baseball.  I don’t mind religious films but it bothered me that One Hit From Home didn’t even seem to care much about the game.  There was no strategy or talk about teamwork or anything else that makes baseball special.  Jimmy never told anyone to bunt or to hit a sacrifice fly to bring another player home.  After a rough start, the team goes on a winning streak but the movie never shows how Jimmy adjusted his coaching style or what he taught the players.  Instead, Jimmy helps his star player get along better with his father and, after one of the movie’s many tragic car accidents, Jimmy goes to church.  I watched One Hit From Home because I wanted to see a baseball movie and I felt cheated.

The worst part of the movie was when Jimmy’s ex-girlfriend stopped by to welcome him back to town and she got offended when she discovered that Jimmy had spent the night with another woman, despite the fact that she was the one who dropped by the house unannounced and it had been years since she and Jimmy had even seen each other.  That made her seem very judgmental and hypocritical but the movie acted like Jimmy was the one who should apologize.

One Hit From Home wasn’t what I was looking for but it won’t make me give up on baseball movies.  I have faith in them, just like I have fath in my Rangers.

One response to “One Hit From Home (2012, dir. by Johnny Meier and David Aaron Stone)”