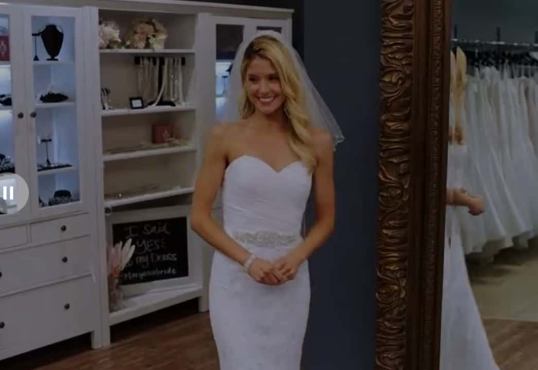 It should be the perfect wedding.

The location is beautiful.  The weather is nice.  The romance is in the air.  The bridesmaids dresses aren’t hideous. The groom, Mark (Greg Perrow), is handsome and charming and no one seems to be too concerned with his mysterious past.  In fact, Mark is such a romantic that he even insisted on not seeing Leah (Brittany Underwood) the night before the wedding.  He is that dedicated to making sure that they have both the perfect wedding and the perfect honeymoon!  Even his future mother-in-law likes him, though that seems to have more to do with his abs than his romantic nature.

Again, it should be the perfect wedding.  There’s only one problem.  No one can find the bride!  Leah has yet to arrive for her own wedding.  Is it possible that she got cold feet and hopped on a plane for tropical island?  (That’s what her father suspects, as Leah apparently has a history of doing impulsive stuff like that.)  Or could it be something more serious?  Leah’s friends are concerned enough to call the police.

And, indeed, Leah has no absconded to the tropics.  Instead, she’s being held prisoner by Faith (Camila Banus), a mentally unstable woman who insists that Leah is making a mistake by marrying “Brian.”  But wait a minute …. Leah is marrying Mark!  Who is this Brian that Faith keeping going on about?  Has Leah mistaken Mark for another ex-boyfriend or is there something more sinister going on?

Well, you can probably guess the answer to all of those questions.  Apparently, this film was originally entitled A Deadly Bridenapping, which is a bit of unwieldy title but which, at the same time, doesn’t reveal as much about the plot as a title like Fatal Fiancé does.  As you can guess from the new title, Mark does have some secrets of his own and there’s a bit more to the kidnapping than just Faith being hung up on an ex-boyfriend.  You’ll figure all of that out long before Leah does but that’s okay.  That’s one of the pleasures of watching a Lifetime film, after all.  We always want to be a step or two ahead of the leading character, the better for us to our shake our heads whenever they make a big and obvious mistake.  Leah makes quite a few of them over the course of Fatal Fiancé.

Fatal Fiancé was a fun movie to watch.  If the best Lifetime films can be described as being about beautiful people finding themselves in ugly situations, Fatal Fiancé delivered.  Leah’s wedding dress was to die for and so were all the houses.  There was plenty of melodrama and plenty of eye candy and really, what else do you need?  Brittany Underwood was a sympathetic main character and Camilia Banus did a good job as the unstable Faith.  Greg Perrow was both charming and menacing as Mark and he got to deliver a rant about pine nut allergies that really had to be seen to be believed.  All in all, this was an entertaining movie about a wedding gone wrong.