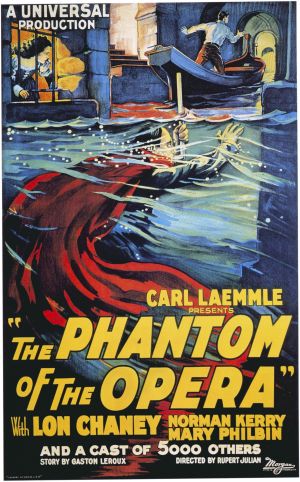 Today’s horror movie on the Shattered Lens is both a classic of silent era and one of the most influential horror films ever made.  It’s one that I previously shared in 2013, 2015, 2016, 2108, and 2019 but it’s such a classic that I feel that it is worth sharing a second (or fifth or even a sixth) time.

First released in 1925, The Phantom of the Opera is today best known for both Lon Chaney’s theatrical but empathetic performance as the Phantom and the iconic scene where Mary Philbin unmasks him. However, the film is also a perfect example of early screen spectacle. The Phantom of the Opera was released during that period of time, between Birth of the Nation and the introduction of sound, when audiences expected films to provide a visual feast and Phantom of the Opera certainly accomplishes that. Indeed, after watching this film and reading Gaston Leroux’s original novel, it’s obvious that the musical was inspired more by the opulence of this film than by the book.

This film is also historically significant in that it was one of the first films to be massively reworked as the result of a poor test screening. The film’s ending was originally faithful to the end of the novel. However, audiences demanded something a little more dramatic and that’s what they got.

3 responses to “Horror On The Lens: The Phantom of the Opera (dir by Rupert Julian)”