The 2001 film, Wendigo, tells the story of a family in the Catskills.  Some families go to upstate New York and they hang out with the dance people and learn a lesson about tolerance, class conflict, and dirty dancing.  Others leave New York City and head up north because they’re trying to get away from the stress that comes from being a New Yorker.  The film is about the latter and, to be honest, I don’t blame them for leaving the city.  While it’s true that I don’t live in New York, I’ve seen enough clips of Bill de Blasio speaking to know that I also would want to get away from that 8 foot monster.

Of course, there are monsters in upstate New York as well.  Just as South Texas has to deal with chupacabras, it would appear that Upstate New York has a Wendigo problem.  According to the film, the Wendigo is a man who turned into a monster after committing cannibalism.  The Wendigo can assume any shape and …. well, it’s basically just a real bitch to be around, I guess.

At least, that’s how it inititally appears when George (Jake Weber) and his wife Kim (Patricia Clarkson) and their son Miles (Erik Per Sullivan) are just starting out their trip upstate.  George accidentally crashed into a deer and gets into with a local hunter named Otis (John Speredakos).  Otis is really upset that George took out that deer before he got a chance to.  George apologizes but it doesn’t seem to do much good.  Later, when the family reach their cabin …. well, things just continue to get out of hand.  Are they being harassed by the hunters or is it the Wendigo?

Or could it be both!?

As you may have guessed, I had a bit of a mixed reaction to Wendigo when I saw it.  On the one hand, I appreciated the way the film captured the feeling of isolation and there’s a few nicely surreal dream sequences.  If you’ve been reading this site for a while, you know how much I appreciate an effective and surreal dream sequence.  However, Wendigo is also a rather slowly-paced film.  It’s only 91 minutes long but it felt much longer and Otis is such a total caricature that it made it difficult for me to take his character seriously as either a hunter or, for that matter, a legitimate threat to anyone’s safety.  As a viewer, I took one look at Otis and I thought to myself, “There better be an actual monster in the film because if this guy is the villain, it’s going to be a long 90 minutes.”

As for the cast, Patricia Clarkson and Jake Weber were believable if not terribly interesting as the parents.  It was especially interesting to see Clarkson in a horror film, as this isn’t a genre with which one really associates her.  (Jake Weber at least has Medium on his resume.)  Erik Per Sullivan also did an okay job as Miles.  I was glad that he wasn’t as annoyingly precocious as a lot of a child actors tend to be.  The supporting cast is a mixed collection of performers who try too hard and those who don’t seem to be trying at all.

Wendigo has got some effective, Shining-influenced visuals and it ends on an appropriately ambiguous note.  The film has its moments but, ultimately, it was a bit too slow-paced and uneven for me. 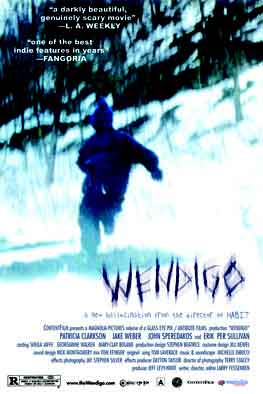