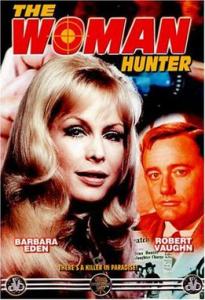 Recovering from a traffic accident and having being recently acquitted on charges of vehicular manslaughter, wealthy socialite Diane Hunter (Barbara Eden) heads down to Acapulco with her businessman husband, Jerry (Robert Vaughn).  Diane wants to get away from the publicity of her case and relax but all Jerry seems to care about is business.  When she meets another American named Paul Carter (Stuart Whitman), Paul presents himself as being an artist.  But as Paul seems to be growing more and more obsessed with Diane and Jerry, Diane becomes convinced that Paul may have more sinister motives.  Is Diane right or is she having another breakdown?

The Woman Hunter is a quickly paced made-for-TV thriller that would probably have worked better if the two men in Diane’s life had been played by different actors.  Stuart Whitman and Robert Vaughn were both good actors but they were also so often cast in villainous roles that, as soon as they appear, everyone will know better than to trust either one of them.  The film’s big twist can be guessed just by the fact that Robert Vaughn is playing Diane’s husband.

Whitman seems bored with his role while Vaughn does his usual sleazy businessman routine.  He’s good at it but it’s a role that he played so often that it’s impossible to be surprised when it’s revealed that he’s less than trustworthy.  Barbara Eden gives a good performance and is really the main reason to watch this movie.  After being typecast as a genie in a bottle, Eden goes out of her way in The Woman Hunter to show that she was capable of doing so much more and, for the most part, she succeeds.  She’s sexy, sympathetic, and does just a good enough job portraying Diane’s mental instability that it does at least seem believable that she could be imagining all of the danger around her.  (Or, at least, it would be believable if the men in her life weren’t all portrayed by veteran screen villains.)

The Woman Hunter is forgettable but it was shot on location in Acapulco so at least everyone involved got a nice trip out of the deal.

One response to “The Woman Hunter (1972, directed by Bernard L. Kowalksi)”