Remember how, a few weeks ago, I said I was going to spend the month of June reviewing 30 gangster movies?  Well, I was doing pretty well but then I got distracted with some things and I ended up falling behind and now, it’s the last day of June and I’ve only reviewed 14 of the 30 films that I was planning on taking a look at.  It’s frustrating but, as any movie blogger can tell you, it happens.  Still, I’m not one to give up so easily!  I promised to review 30 gangster movies and I’m going to keep my word.  Or, at the very least, I’m going to try to…. like, definitely maybe try to….

Bugsy Malone is an homage to the old gangster movies of the 1920s and 30s.  It’s also a musical, featuring a lot of songs about wanting to make a lot of money, fall in love, and go away to Hollywood.  On top of all that, it’s also a children’s film.  Though they may be playing gangsters and going to war over who will control the rackets, the cast is entirely made up of children.  Though the film does feature a lot of guns, none of the guns fire bullets.  Instead, they shoot custard pies.  Once you get cornered by a rival gangster and you get “splurged,” your career in the rackets is over.  You’re humiliated.  You’re nothing.  You’re just another two-bit hood who couldn’t make it in the big leagues.  You’re just….

Well, you get the idea.

Basically, the plot of the film is that Dandy Dan (Martin Lev) and Fat Sam (John Cassissi) are two rival gangsters who want to take over the Lower East Side.  Fat Sam owns a speakeasy, which means that there’s always a lot of dancing and singing going on in the background.  Bugsy Malone (Scott Baio) is a tough boxer who wants Fat Sam to give a job to Blousey Brown (Florrie Dugger), who dreams of going to Hollywood and becoming a big star.  Tallulah (Jodie Foster) is Fat Sam’s gun moll but she used to go out with Bugsy and she still wants him back.  Bugsy get caught up in the middle of the war between Dandy Dan and Fat Sam and it all eventually leads to a big pie fight and a lot of children covered in custard.  “You give a little love,” the children sing as they realize that their lives don’t have to be defined by gang wars, “and it all comes back to you….”

So, I have to admit that I was absolutely dreading watching Bugsy Malone.  I mean, singing children and custard pie guns?  It all sound just unbearably cutesy.  But, to my surprise, Bugsy Malone actually turned out to be a fun and clever little movie, one that was full of smart dialogue, catchy songs, excellent dancing, and wonderfully non-cutesy performances from its cast.  Even though the film may be about a bunch of children dressing up as gangsters, all of the child actors take their characters seriously and director Alan Parker directs the film as if it were an actual gangster film as opposed to just a children’s musical.  The end result is a film that’s cute but never cutesy.  Believe me, there is a huge difference between the two.

To my shock, Bugsy Malone turned out to be an offer that you can’t refuse. 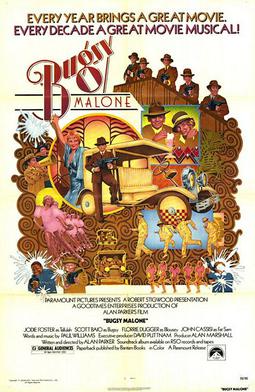 8 responses to “An Offer You Can’t Refuse #15: Bugsy Malone (dir by Alan Parker)”