The other night, I watched the 1951 film Racket Girls with a select group of friends.  We get together every Saturday night and watch a movie.  Usually, the movie’s pretty bad.  (For instance, we watched Disco Beaver From Outer Space one night.)  Still, I think Racket Girls might be the worst film we’ve seen to date.

Racket Girls tells the story about how the mob infiltrated the sport of professional wrestling.  Umberto Scali (Timothy Farrell) and his little friend Joe (Don Ferrara) make their living managing female wrestlers but it turns out that the wrestling hall is really a front for all of Umberto’s illegal activities.  We’re told that there’s a lot of illegal activities going on but we don’t really see many of them.  Anyway, Umberto borrows too much money from Mr. Big and then he gets the police mad at him and it looks like it all might lead to a bad end for Umberto and his little friend Joe.

Or maybe not.  Who knows?  This movie is only a 67 minutes long but it’s next to impossible to actually follow the plot.  To be honest, I found the complete lack of background music to be more interesting than the plot itself.  It gave the film a strangely existential feel.  There’s no music.  There’s no entertainment.  There’s just a lot of wrestling and bullets.

In fact, I’d say that the film is 75% wrestling, which …. well, I guess whether or not that works depends on whether or not you’re a fan of grainy professional wrestling footage.  I’m not a huge fan, though I’ve seen some good wrestling movies that were smart enough to explore the real people behind the outsized personas.  In Racket Girls, no one really has a personality and no one has a persona either.  There’s a lot of overhead shots of a wrestling ring and we hear what sounds like a crowd cheering even though we never actually see them.  It’s actually a bit of an odd effect.  It makes the wrestling scenes seem positively surreal.  I kept waiting for that strange radiator woman from Eraserhead to step out in the ring and start singing, In Heaven, Everything Is Fine….

Anyway, the film does make a legitimate point about mob’s influence in professional sports.  Umberto, it should be noted, doesn’t appear to be a very smart gangster.  That’s his downfall.  Still, if you enjoy watching movie featuring tough guys in black suits threatening each other …. well, this film probably still isn’t for you.  I mean, a few of the actors playing the gangsters have got the look down but no one’s particularly convincing.  It’s like a community theater production of The Sopranos or something.  It’s like they remade Scarface with Justin Bieber.

As I watched this film, I found myself wondering whether or not Ed Wood was involved because the film just feels like an Ed Wood production.  Also, it should be noted that Racket Girls was produced by George Weiss, who produced several of Wood’s films and that star Timothy Farrell appeared in at least 3 Wood-directed films.  Ed Wood’s name doesn’t appear anywhere in the credit but I swear, this film has his finger prints all over it.

I’m probably making Racket Girls sound more amusing than it actually is.  This is an incredibly boring movie.  My friends nearly abandoned me about ten minutes into the movie and that hardly ever happens.  I had to beg them to stay and watch the rest of the film.  (I told them that there was a cartoon coming up that featured the first appearance of Bobba Fett.  That was the same line I used to keep them from abandoning me two years ago when we were watching The Star Wars Holiday Special.)  This is an offer that you can refuse.  In fact, you should refuse it. 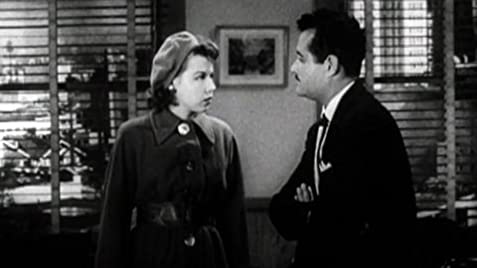 12 responses to “An Offer You Should Refuse #12: Racket Girls (dir by Robert C. Dertano)”