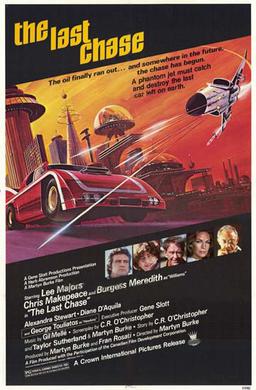 In the near-future (the movie takes place in 2011 but it was made in 1981 and it’s 2020 today so you do the math), over half of humanity has been wiped out by a plague and America has been taken over by a totalitarian government.  The government has outlawed cars and instead requires everyone to use public transportation.  The are rumors that, if you can make your way to Free California, you can drive whatever and whenever you want.  But to do that, you’d have to be able to drive down a highway and no one has a car!

Franklyn Hart (Lee Majors) is a former race car driver who lost his family to the plague and who now serves as an official government spokesman, encouraging people to ride public transportation and to not use fossil fuels.  However, Hart doesn’t believe what he’s preaching.  In fact, in a secret basement, he has a car!  It’s an orange Porsche and, by breaking into junkyards at night, he’s been able to get the parts necessary to rebuild its engine.  His plan is to show up the government by driving the Porsche across the country, all the way to California.  Accompanying Franklyn will be Ring McCarthy (Chris Makepeace), a bullied teenage computer expert who needs a father figure.  That sounds like a job for Lee Majors!

With Franklyn now driving across the country, the government knows that they have to stop him!  But how?  Because all of the other cars have been destroyed, the police have to ride around on golf carts that can’t keep up with a Porsche.  Since they’re apparently not a very well-organized group of fascists, they also don’t have any drones, bombs, or apparently anything else that they could use to take the incredibly conspicuous race car that is driving across America.  The government turns to J.G. Williams (Burgess Meredith), mostly because Williams owns a fighter plane that was last used in the Korean War.  Williams agrees to stop Franklyn and Ring but secretly, he finds himself sympathizing with their cause.

The most interesting thing about The Last Chase is the idea of California becoming a libertarian paradise where the residents are rebelling against overly stringent environmental regulations.  That alone makes this a fun film to watch on Earth Day.  Unfortunately, The Last Chase never really lives up to its intriguing premise.  Ironically, for a film called The Last Chase, there just aren’t enough chase scenes.  Instead, the movie spends a lot of time on Ring needing a father figure and Franklyn needing a new family to replace the one that he lost and who wants to see that when you could be watching an orange Porsche racing down the highway?  This is a movie that calls out for a Mad Max approach but instead, it’s more of an After School special about accepting your stepfather and running away with him to California.  It’s a strange message but at least the car’s cool.

One response to “The Last Chase (1981, directed by Martyn Burke)”