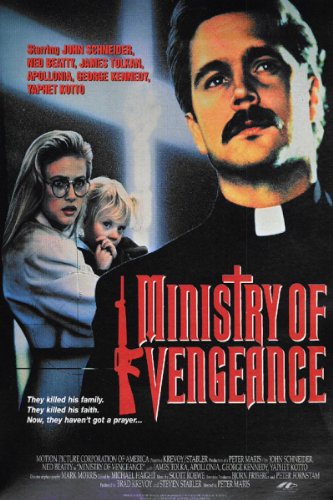 David Miller (John Schneider) is a former soldier who served in the Vietnam War.  Though David managed to survive the war, the majority of his platoon did not and he is still haunted by the day when he was forced to blow up a kid who was working for the VC.  After getting out of the army, David renounces violence and war and he becomes an Episcopal priest.  (His denomination is never really made clear but he wears a collar and he’s got a family so I assume he’s Episcopal.)  He marries Gail (Meg Register) and they have a daughter named Kim (Joey Peters).  Eventually, the Millers find themselves in Rome, where David works with a kindly minister named Hughes (George Kennedy) and preaches the word of the God and the gospel of nonviolence.

Unfortunately, the Millers just happen to be in an airport when it’s attacked by a group of terrorists led by Ali Aboud (Robert Miano).  As David watches, Aboud personally executes his wife and daughter.  Though David survives the attack because Aboud says, “Leave the priest alive!,” his faith is shaken and he goes from renouncing violence to renouncing peace.  After the local CIA agent (Yaphet Kott) refuses to tell David the name or the location of the terrorist who killed his family, David just happens to open up a magazine and finds himself staring at a picture of Ali Aboud.  Ministry of Vengeance may claim to be about faith but it’s mostly about coincidence.

After David discovers that Aboud is in Lebanon, he decides it’s time for him to fly over and dispense some “eye for an eye” justice.  First, David has to get trained by his old drill instructor (James Tolkan).  Once he’s back in fighting shape, David heads off to Lebanon, little aware that Aboud is actually a CIA informant and that the agency is prepared to kill to protect its assets.

Ministry of Vengeance is one of those direct-to-video films where the majority of the budget was spent on getting a handful of “name” actors to make a brief appearance and give the entire production the feel of being a legitimate movie.  So, along with George Kennedy and Yaphet Kotto, Ned Beatty shows up as a quirky minister in Lebanon while Prince’s former protegee, Apollonia Kotero, plays Beatty’s daughter.  None of them get to do as much as you might like.  It’s always good to see Kotto, even if he’s appearing in a bad film, but his role here is mostly just a glorified cameo.  Most of the film is about John Schneider, trying to balance his faith with his desire for vengeance.  That’s a potentially interesting angle to bring to the story but the movie’s handling of the issue is shallow.  David has doubts about his mission but only when it’s convenient for the film’s narrative.

There are a few good action scenes.  James Tolkan is a blast in the R. Lee Ermey roll of the hardass drill sergeant.  Otherwise, Ministry of Vengeance is as forgettable as a guest sermon.

One response to “Ministry of Vengeance (1989, directed by Peter Maris)”