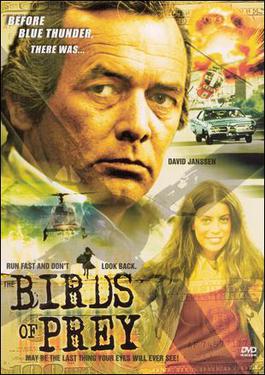 When three disgruntled Vietnam vets rob Zion’s Bank in downtown Salt Lake City and take a bank teller (Elayne Heilveil) hostage, they’re spotted by traffic reporter Harry Walker (David Janssen).  A World War II vet who is going through a mid-life crisis and who feels unappreciated by the country that he risked his life to defend, Harry chases after the robbers in his helicopter.  With Harry’s help, the police corner the robbers on the roof of a parking garage.

That’s when they discover that the robbers have a helicopter of their own!  After abandoning their car, the robbers and their hostage take off in their helicopter, heading into the Oquirrh Mountains.  Though he’s running low on fuel and has been ordered to back off by Police Captain Jim McAndrew (Ralph Meeker), Harry continues to pursue the other helicopter into the wilderness.

A made-for-TV movie from 1973, Birds of Prey is a chase movie, with the usual cars replaced by helicopters.  What makes this movie so exciting is that it was directed in the days before CGI so, when you watch the two helicopters dangerously pursuing each other over Salt Lake City and taking daredevil risk over the mountains of Utah, you’re watching the real thing.  David Janssen was a trained pilot who actually was flying the helicopter and doing his own stunts for the majority of the film.  When the two helicopters nearly collide, you’re aware that you’re seeing a real near-miss, one that could have gone tragically wrong if not for the talents of the men piloting those helicopters.

Despite all of the action in the air, the film does occasionally touch ground.  Harry and McAndrew talk about why some vets can move on and others can’t.  Harry briefly lands on the freeway and gets some help from a passing motorist.  Finally, Harry gets to know the kidnapped teller, who has never been outside of Salt Lake City and who shares Harry’s love of old movies.  David Janssen was the go-to guy for gruff and grizzled heroes in 1970s made-for-TV movies and he’s pretty good as Harry.  But the real stars of the film are the helicopters and the still-impressive aerial footage of them chasing each other above Utah.

Unfortunately, I have never seen a good print of Birds of Prey.  Even the version on Amazon Prime is grainy, scratchy, and sometimes washed-out.  (It also features a promo for a television station in Phoenix, suggesting that it was transferred straight from a VHS tape.)  I hope that, at some point in the near future, someone will restore this minor chase classic.


Way back when the Academy first started to hand out awards to honor the best films of the year, they actually gave out two awards for best picture.  One of the awards was called Oustanding Production and it’s assumed by most Oscar historians that it was meant to go to the most “entertaining” film of the year.  The other award was called Best Unique and Artistic Picture and it was meant to honor the type of films that might not make a huge amount of money at the box office but which did the most to move cinema forward as an art form.

As a result, when the very first Academy Awards were awarded at the Hollywood Roosevelt Hotel on May 16th, 1929, a popular war film named Wings was named Outstanding Production while F.W. Murnau’s Sunrise was named Best Unique and Artistic Picture.  Sunrise defeated two other nominees, a documentary called Chang and King Vidor’s The Crowd.

It’s long been rumored that, when the votes were first counted, The Crowd originally won Best Unique and Artist Picture but that Louis B. Mayer insisted that the award should go to Sunrise instead.  The head of MGM, Louis B. Mayer reportedly disliked The Crowd, even though it was distributed by his own studio.  Mayer felt that the film was too downbeat and he also resented that King Vidor had resisted Mayer’s demand that the film have a traditionally happy ending.  It’s also been suggested that, since the Academy was largely Mayer’s idea, he felt that, if an MGM film won the initial reward, it would lead to his enemies claiming that Mayer had too much influence over the organization.  That may or may not be true, no one can say for sure.  What we can say for sure, however, is that both The Crowd and Sunrise continue to be recognized as classics of the silent era.

The Crowd tells the story of John Sims (James Muray), who goes to New York when he’s 21, convinced that he’s destined to be someone important.  Sims gets a job at Atlas Insurance, where he’s one of many faceless office workers.  He meets and, after one date, marries Mary (Eleanor Broadman).  They live in a tiny apartment next to an elevated track.  Over the next five years, they raise a family.  They fight often.  Occasionally, they beak up but they always get back together.  Throughout it all, John struggles to prove himself as an individual, just to be continually reminded that he’s only a member of the faceless crowd.

It’s not a particularly happy film.  John starts the film as a member of the crowd and he’s still a member of the crowd when it ends.  If there is anything positive to be found in the film, it’s that John’s family loves him but, even taking that in to consideration, it’s obvious that he and Mary are going to spend their entire lives struggling and that the same fate probably awaits their children.  Knowing that the film was made on the verge of the start of the Great Depression makes John’s story all the more poignant.  If he thinks things are bad now, they’re about to get even worse.

Seen today, The Crowd is still a visually striking film.  Influenced by German expressionism (particularly the work of Sunrise‘s director, F.W. Murnau), Vidor presents New York as being a menacing and frequently surreal world of towering skyscrapers and unfriendly faces.  (Vidor even used the then-unheard of technique of using a hidden camera to capture actual documentary footage of star James Murray dealing with real New Yorkers.)  The Crowd is probably best remembered for the shot where the camera pans up the length of a skyscraper, finally entering the building and showing us the anonymous office workers within.  It’s a shot that perfectly captures the film’s theme of being lost and ignored in an impersonal world.  It’s also a shot that’s been duplicated in a countless number of films.  The Crowd may be 92 years old but its legacy lives on.

Sadly, things did not turn out well for James Murray, the former extra who Vidor cast in the lead role.  The success of The Crowd did not translate into success for Murray.  An alcoholic, Murray ended up living on Skid Row, where he once asked King Vidor for money and reacted with anger when Vidor offered him a role in a new film.  In 1936, Murray was found floating in the Hudson River.  He was 35 years old.

As for the Oscar for Best Unique and Artistic Motion Picture, it was only awarded once.  Starting with the second Oscar ceremony, the Academy merged the two best film awards into one.  Interestingly, the idea of giving out two Best Picture awards was briefly revived in 2018 but the response to the idea was so negative that it was quickly abandoned. 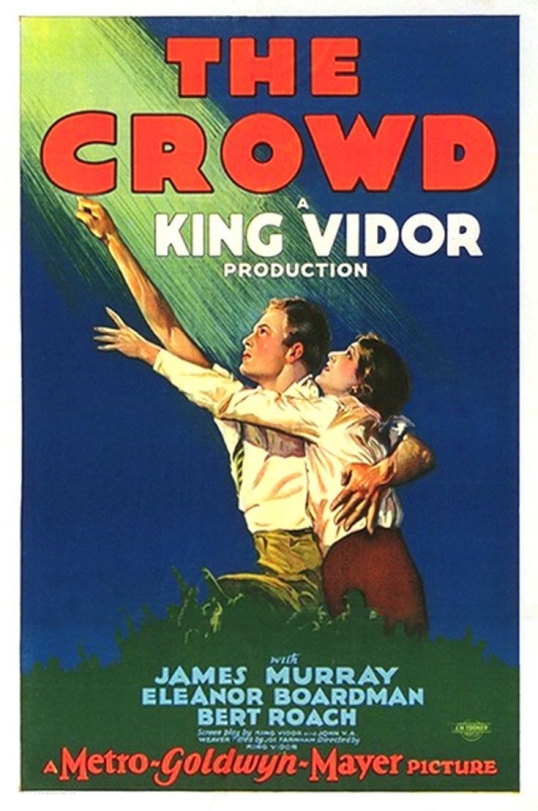 The Denver Film Critics have become the latest group to honor 1917 as the best of 2019!

Here are their winners:

Today, we wish a happy birthday to one the early pioneers of independent film, Steven Soderbergh.  Soderbergh was 26 years old in 1989, when he became the youngest director to ever win the Palme d’Or at Cannes.  Soderbergh went on to become one of the busiest and most interesting director in Hollywood, working in all genres and inspiring filmmakers the world over. 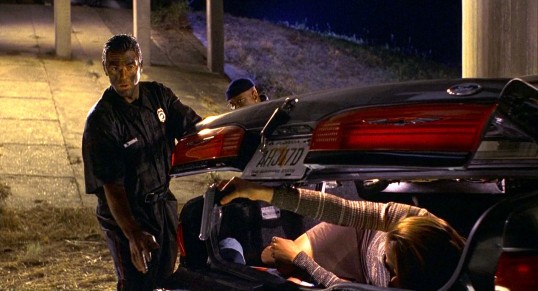 Out of Sight (1998, directed by Steven Soderbergh) 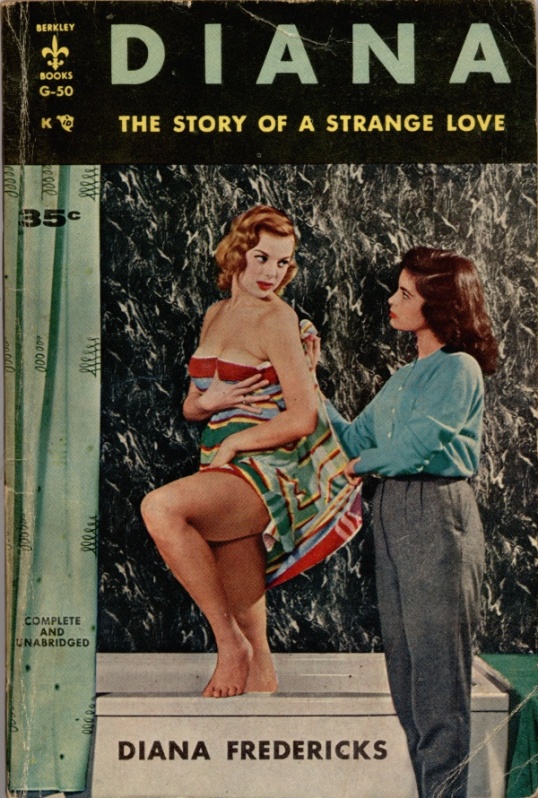 
“I felt for sometime that the motivating energy, or the captivating energy, or the engrossing energy available to us today is the energy coming from the extremes. That’s why we have Malcolm X. And somehow it’s only these extremist positions that can compel our attention. And I find in my own mind that I have to resist these extremist positions when I find myself drifting into a mystical fascism in regards to myself.

So this song, ‘First We Take Manhattan,’ what is it? Is he serious? And who is we? And what is this constituency that he’s addressing? Well, it’s that constituency that shares this sense of titillation with extremist positions. I’d rather do that with an appetite for extremism than blow up a bus full of schoolchildren.”

— Leonard Cohen, on the meaning of First We Take Manhattan

Well, that clears everything right up, doesn’t it?

Because his music was embraced by the counterculture and the folksies, Leonard Cohen has often be mischaracterized as some sort of hippie troubadour.  In reality, his lyrics were frequently dark and threatening, which is one reason that a whole generation of listeners first discovered Cohen as a result of several of his song being included on the Natural Born Killers soundtrack.  In First We Take Manhattan, he sings from the point of view of someone who is ready to give up music and love and go to war.  “First we take Manhattan, then we take Berlin.”

Though Cohen wrote this song, it was first recorded by Jennifer Warnes in 1986.  Cohen would not release his own version until two years later, when it was the first track on his album, I’m Your Man.  The music video for Cohen’s version was directed by French photographer Dominique Isserman, who was in a romantic relationship with Cohen at the time.  The video features Cohen on the beach, with the ocean standing in the way of his promise to take Manhattan and then Berlin.

In 2009, Cohen’s version of the song later played over the end credits of Watchmen.