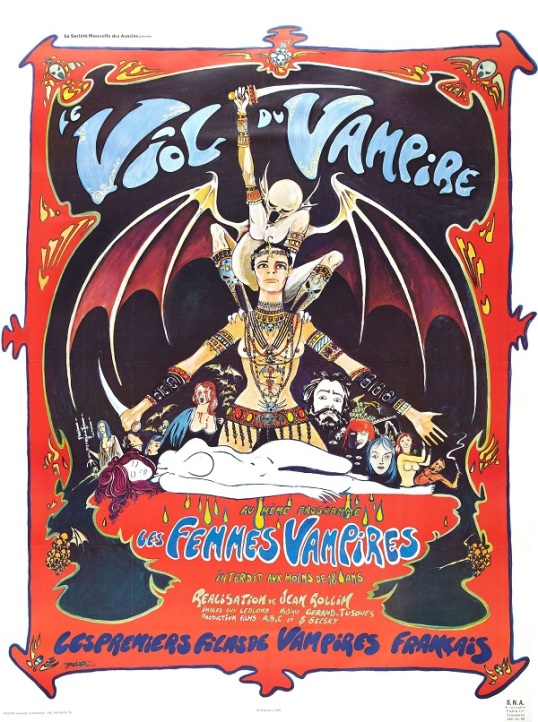 Don’t worry, I’m not going to review this film in French.

I wish I could because this was the feature film debut of Jean Rollin, who made horror films that were uniquely French in both their vision and their execution.  A decade ago, I probably could have written an at least 300-word review in vaguely passable French but, unfortunately, my language skills have gotten a bit rusty as of late.  “But Lisa, what about Google translate?”  Uhmmm ….. yeah, that’s not a good idea.  The comprehension powers of Google translate are a bit overstated.

Anyway, on to the film!

I absolutely love the wonderfully surreal films of Jean Rollin.  At his best, Rollin was responsible for some of the most visually impressive and narratively incoherent films ever made.  Believe it or not, I don’t mean incoherent in a bad way.  A Rollin film creates its own unique world, one in which things don’t necessarily have to make much sense.  A Jean Rollin movie is like a filmed dream, one in which the stories continually seem to loop back to the same group of obsessions.  There’s always an emphasis on memory and the importance of the past.  The countryside is always beautiful but also always full of menace.  There’s always a scene or two at the beach.  It’s not unusual for a Rollin film to end with the water washing away the evil, like some sort of fairy tale.  There’s usually a house in the country and Rollin’s camera loved old French architecture just as much as it loved images of people making love.  Rollin’s films often very sincerely celebrated female friendship while, at the same time, continually returning to the theme of lesbian vampires.  In fact, I think it can be argued that the best way to appreciate Rollin’s films is to sit down and watch all of them, one after another.  So many theme reoccur from film to film that ultimately, they all become a part of giant and very strange tapestry of lust, secrets, and the paranormal in France.

Le Viol du Vampire (which translates to The Rape of the Vampire in English) was Rollin’s feature directing debut.  It started out as a 30-minute short film, one that more or less made sense.  A producer then offered Rollin some money to expand the short into a feature film.  The end result was a deeply strange but visually stunning film, one in which characters who clearly died in the original short film mysteriously came back to life so that they could take part in the second part of the film.

As I said, that part of the film makes sense.  But then suddenly, a vampire queen appears and suddenly there’s all these other vampires running around and some of them are dressed like court jesters and there’s a doctor working at a clinic who thinks that he can cure vampirism and then there’s a revolution against the queen and there’s a car chase and you’re never really sure who is who or what it is that they’re doing or why they’re doing it.  Rollin was a noted fan of the old serials and that’s how directs the final 60 minutes of Le Viol du Vampire.  Cliffhanger after cliffhanger follows twist after twist and, again, you find yourself wondering if even Rollin was able to keep up with it all. 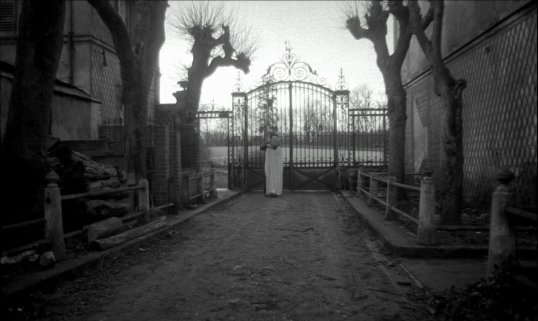 And yet, it remains a compelling film because Rollin was such a gifted visual artist and the black-and-white cinematography is so atmospheric that it’s very easy to ignore the plot and instead just enjoy looking at the film.  I would actually suggest waiting to watch this film until you’ve seen some of Rollin’s other films.  Once you’ve experienced Rollin’s unique aesthetic vision, it’s easy to watch Le Viol du Vampire and say, “There’s the beach!  There’s the clowns!  There’s the lesbian vampires!  There’s everything that we’ve come to expect from Jean Rollin!”

Le Viol du Vampire was released in 1968.  It was released at a time when political turmoil had brought much of the French film industry to a halt.  As a result, Le Viol du Vampire was the only film playing several theaters.  If you were in France during the summer of 1968 and you wanted to go to the movies, Le Viol du Vampire was often the only option available.  As a result, a huge number of people went to this movie.  Audiences were reportedly so angered by the film’s intentional incoherence that they rioted and threw things at the screen.  It was quite a scandal but it also made Rollin a bit of a star.

Seen today, the film is still incoherent but it’s also a chance to see where one of the most interesting horror directors of the 20th Century got his start.