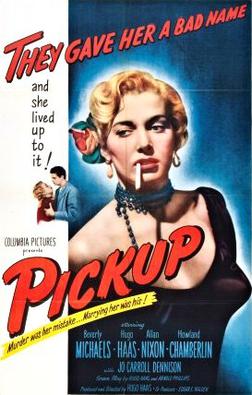 Once upon a time, there was a man who lived by the railroad tracks.  He was a station agent and his name was Jan Horak (Hugo Haas) but everyone just called him “Hunky.”  He was a middle-aged man, originally from Eastern Europe.  He lived in a little house and basically kept to himself.  His only friends were a slang-spouting hobo known as The Professor (Howland Chamberlain) and his assistant, the young and handsome Steve (Allan Nixon).  With no family in the United States, Hunky was frequently lonely so he decided to go to the town carnival and buy a puppy.  Instead, he ended up meeting the woman who will not only become his wife but who would also eventually plot his murder.

And so begins the low-budget 1951 film, Pickup.

The woman who Hunky meets is Betty (Beverly Michaels).  When we first see Betty, she’s riding on a miracle-go-round with a rather bored look on her face.  (The camera lingers on her legs, which was the traditional way that films introduced “dangerous” women in the late 40s and 50s.)  We know that Betty is probably bad news because she chews gum with her mouth open and she smirks as soon as she sees Hunky stumbling around the carnival.  She approaches him and starts to flirt with him.  Hunky is so smitten that he forgets about buying a puppy.

Instead, he returns home and prepares for a wedding.  However, what Hunky doesn’t know is that Betty is in desperate need of money and the only reason that she’s showing any interest in him is because she’s under the impression that he’s rich.  As soon as they get married, Betty starts planning for a way to lose a husband while still getting to keep his money.  Not surprisingly, it involves Steve….

It also involves a sudden case of deafness.  Even before Hunky marries Betty, he suffers from a persistent ringing in his ears.  It only gets worse as it becomes more and more obvious just how unhappy Betty is in their marriage.  One day, while standing on the railroad tracks, Hunky loses his hearing all together.

He screams at the sky and hears nothing.

He grabs a sledgehammer and starts pounding it against the tracks and, again, he hears nothing.

Hunky’s gone deaf!  Steve moves in to help Betty take care of her husband.  He also moves in because he’s been having an affair with Betty for quite some time.  They openly discuss murdering Hunky in front of him, confident that he can’t hear a word that they’re saying.  What they don’t realize, though, is that Hunky’s deafness was only temporary and he knows exactly what they’re planning to do….

I really liked Pickup.  Plotwise, it’s not the most original film ever made.  In fact, the film is often described as being an unofficial remake of The Postman Always Rings Twice (this despite the fact that Pickup is based on a novel that was published before James Cain’s famous story).  But that said, the film has enough odd and quirky moments to make it stand out.

For instance, there’s the character of the Professor, who comes across like some sort of early beatnik who has somehow found himself in a hard-boiled crime film.  There’s the scenes of Hunky not only losing his hearing but also slowly recovering it, with dialogue fading in and out as if it was recorded underwater.  And then there’s Beverly Michaels, giving an absolutely wonderful performance as Betty.  As played by Michaels, Betty is someone who is very much aware that she’s playing a role.  She delivers every sarcastic put-down with confidence and style but, throughout the film, there are hints that Betty is not quite as sure-of-herself as she seems to be.  (Just watch the scene where she nervously tries to light a cigarette.)

There’s a profound sense of melancholy running through Pickup, one that only really becomes clear after the film ends. For that, we must credit director and star Hugo Haas.  Originally hailing from what is now the Czech Republic, Hugo Haas came to Hollywood to escape the Nazis and he plays Hunky with the sad weariness of a man who understands that the world can be a dark place.  As written, Hunky seems incredibly naive but, as played by Haas, he’s just a man so desperate to believe in love and kindness that he allows himself to tricked.  However, as the film makes clear, he’s never as much of a fool as the people around him believe him to be.  Before eventually returning to Europe, Haas made a handful of successful (if not quite critically acclaimed) films in America.  Almost all of them seemed to return to the same theme of outsiders searching for love.

Personally, I recommend picking up Pickup.  It’s a classic B-noir, worth seeing for both Beverly Michaels and Hugo Haas.