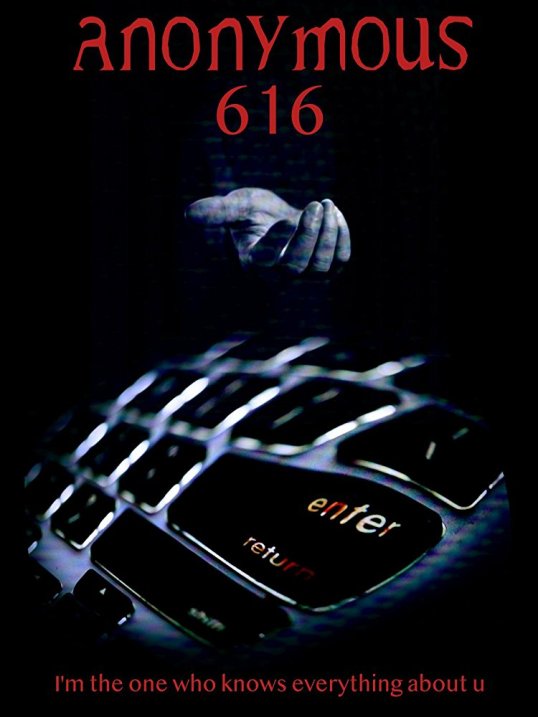 Anonymous 616 opens with the camera panning over a fairly upscale living room.  It’s tastefully decorated, with a nice white couch and a coffee table and even a painting of the house’s owner.  Unfortunately, all of the furniture and decorations are now splattered with blood.

It doesn’t take long to realize that we’re looking at the aftermath of something terrible.  There are four people in the room.  One is lying naked on the couch.  One is slumped in a chair.  Another has literally been nailed to the wall.  One person wanders through the scene, in an apparent daze.  Is that person a survivor or was that person the perpetrator?

The film flashes back to the hours before the massacre happened.  The room is now clean and happy.  Four friends are having a reunion.  The owner of the house is Eric (David Abramsky), who is very proud of his possessions and his money.  (The fact that Eric is so open and honest about his materialism makes him far more likable than you might originally expect.)  Eric’s girlfriend is an artist named Monica (Lena Roma).  She’s the one who painted the picture of Eric that decorates the living room.  And then there’s Jason (Daniel Felix de Weldon) and his girlfriend, Jenna (Jessica Boss).  Jason is in the Army and will soon be going to Iraq for his third tour of duty.  Jason is proud of his service.  He also proudly states that, unlike so many others, he’s never suffered from PTSD.

The reunion starts out friendly enough, though there’s an undercurrent of tension from the beginning.  Whenever a group of characters all claim to be happy with their lives, you know that something bad is going to happen.  While Monica’s 12 year-old daughter (Bella Shepard) relaxes in her room, the four adults talk.  There are hints of dark secrets lurking in the past and flashes of paranoia.  After passing around a joint, Eric explains that there’s a new drug, one that’s described as being like DMT with “an extra kick.”  Everyone gives it a try.

And the reunion continues.  One person steps into an office and finds an anonymous message waiting on a computer.  “i’m the one who knows everything about u,” the message reads before suggesting that it’s time for the person to finally do what they truly want to do.  “B like God!” the message reads.  “Don’t deny your impulses for the next 4 minutes.”

Anoynmous 616 is a low-budget but effective horror film, one that will keep you guessing whether the messages are real or fake, supernatural or just a reflection of a drug-addled psychosis.  The violence is bloody and disturbing but, at the same time, it’s not just violence for the sake of violence.  There’s a lot of going on underneath the surface, much of which I can’t reveal without running the risk of spoiling the film.  In the end, Anonymous 616 is about more than just blood.  It’s about guilt, anger, repression, and betrayal.  It’s a film that invites you to wonder how well you know your best friends.  Well-directed and acted, It’s not always easy to watch (I had to avert my eyes during a scene involving a mallet) but it definitely makes an impression.

Anoynmous 616 is currently available from Amazon.

One response to “Film Review: Anonymous 616 (dir by Mike Boss)”