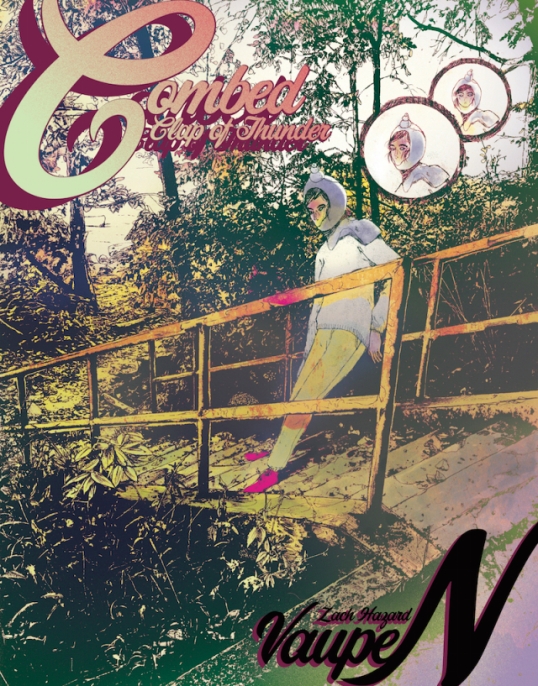 Fair warning at the outset : that question I pose in the headline for this review? I’m not sure I can answer it. But it’s not for lack of trying.

New York-based cartoonist Zach Hazard Vaupen’s Combed Clap Of Thunder (to my knowledge his first “solo” book, his previous material appearing in a handful of multi-creator anthologies) is a comic I’ve been poring and puzzling over since its release by means of the Retrofit/Big Plant Comics publishing partnership six or seven months back. It’s an engrossing work, to be sure, but not one that lends itself to clear-cut analysis. Which isn’t to say that the triptych of thematically-not-dissimilar stories are somehow oblique affairs — in point of fact, while they’re certainly (sorry to invoke the term, but) surreal in terms of execution and expression, they’re relatively straightforward narratives : “The Lonely Autocannibal The Scientist” is an internal monolgue on the…

Utopia was a German science fiction magazine that was published from 1953 to 1968.  Check out a few of Utopia’s exciting and colorful covers below! 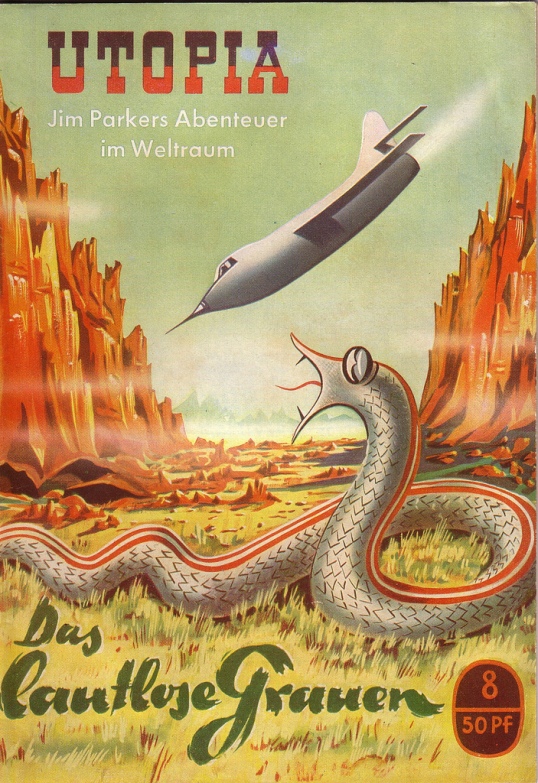 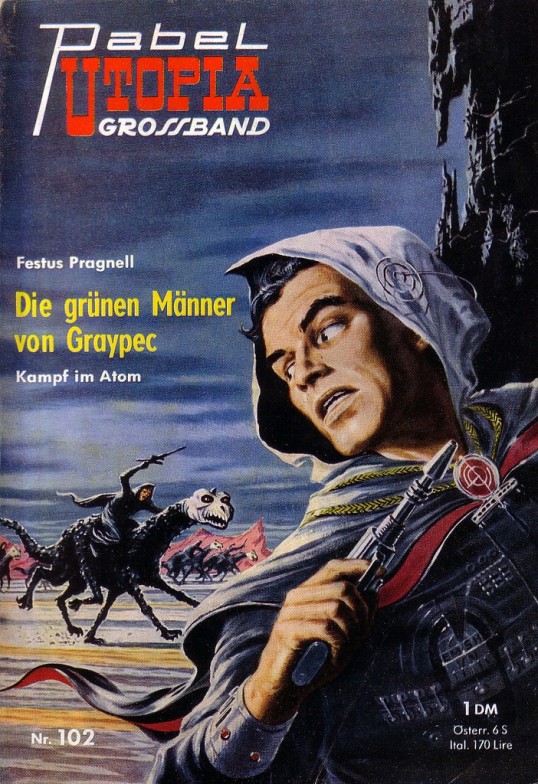 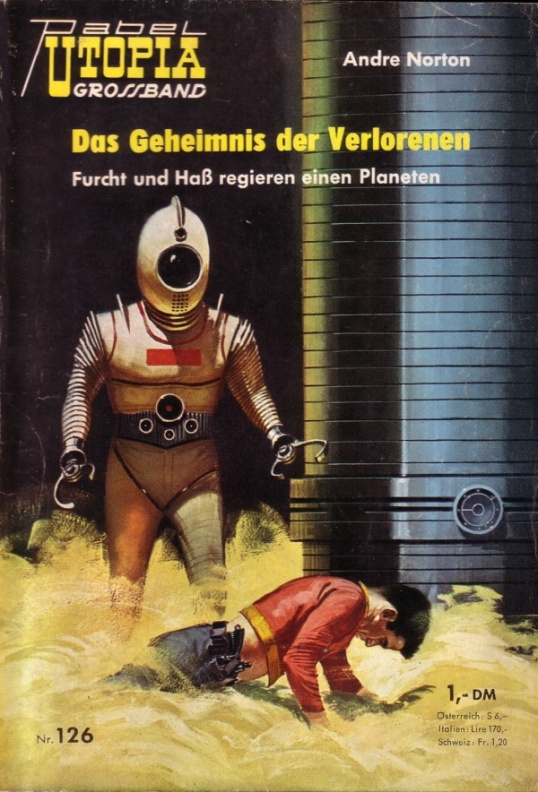 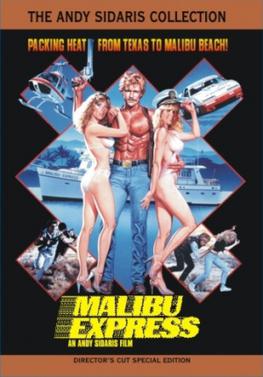 Other than being the protagonist of the 1985 film Malibu Express, just who is Cody Abilene (played, in the film, by Darby Hilton)?

He’s a private investigator.  Judging from his accent, he’s from Texas.  He drives a red sports car and he lives on a houseboat that he’s named the Malibu Express.  He’s even got a painting of a caboose that stands on the docks next to his boat.  (It all goes back to an old friend of his and how he wanted to “remember her caboose.”)  He’s got nice hair and mustache and he looks like he could have had a career in 70s porn.  Literally everyone that he meets wants to have sex with him.  His best friend is a cop named Beverly (Lori Sutton).  His girlfriend is a race car driver named Judy Khnockers (Lynda Wiesmier).  “Khnockers … with an H.”  Cody says that about a thousand times over the course of the film.

Cody loves his cars.  Of course, it seems like he can’t go anywhere without running into three obsese rednecks who always demand that he race their son.  (Their son is apparently a mechanical genius.)  Cody always gives into their racing demands and he loses almost every time.

Cody also spends a lot of time talking to himself.  Nothing he says is that interesting.  I spent the entire movie waiting for him to say, “I hate pigs but yet I love bacon, what’s all that about?”  He never did.  I think the film would have been better if he had.

I should also mention that Cody is remarkably incompetent at his job.  The movie opens with him at the shooting range, firing his gun and continually missing the target.  Later on in the film, Cody’s accuracy will get better but he still always seem to be shocked whenever he actually hits his target.  From what we hear in the film, it appears that Cody has the respect of his peers but I’m really not sure why.  While he does solve the case, it’s mostly through dumb luck.  Cody doesn’t find clues through detective work.  Instead, he just kind of stumbles across them.

As for the case that Cody is investigating in Malibu Express … well, honestly, your guess is as good as mine.  I watched the film and I could hardly follow the plot.  Some of that is because this is one of those films that appears to have been edited with a chainsaw.  But a lot of it is because the film’s plot has a make-it-up-as-you-go-along feel to it.

It starts with Cody being hired by the mysterious Contessa Luciana (Sybil Danning) to investigate who has been selling computer secrets to the Russians.  Luciana has figured out that it has to be someone in the household of her friend, Lady Lillian Chamberlain (Niki Dantine).  (Apparently, every aristocrat in Europe has relocated to Bel Air.)  It doesn’t take long for Cody to discover that everyone in the house has a secret.  For instance, one daughter is having an affair with a butler.  A son-in-law is actually a drag queen.  Another daughter has gotten involved with a sinister computer mogul.

The computer mogul sounds like a good lead to pursue but, before it occurs to Cody to do that, there’s a murder and Cody shifts his attention to trying to figure out who did the killing.  But then suddenly, Cody’s being chased by three armed men so Cody shifts his attention yet again to trying to escape from them.  Fortunately, the actual murderer doesn’t really seem to care that much about remaining undetected, which certainly works out well for Cody…

Malibu Express is an Andy Sidaris film.  If you’ve ever seen a Sidaris film, you know better than to expect a nuanced or even narratively coherent film.  Sidaris specialized in over-the-top B-movies with nonsensical plots, frequent nudity, and dialogue that was heavy on groan-worthy double entendres.  Malibu Express was the first of his so-called triple “B” films (that stood for either Bullets, Bombs, and Babes or Bullets, Bombs, and Boobs, depending on who you ask).  It’s definitely a flawed film.  The plot makes no sense.  The dialogue is often cringe worthy.  The acting ranges from competent to awful.  The editing … oh my God, don’t even get me started on how messy this film is.

And yet, it’s also an oddly likable film.  If nothing else, the film seems to be aware of its flaws.  It knows that it makes no sense and that Cody is incompetent and no one in real life would ever say 75% of the lines that are uttered in Malibu Express.  It knows all of this but the film is determined to have fun and it’s hard to admire the film’s determination to full embrace the exploitation aesthetic.  Watching Malibu Express, you can tell that Sidaris probably enjoyed himself will directing it.  How much fun you have will depend on how much patience you have for Sidaris’s style of filmmaking.

Myself, I love over-the-top B-movies so I enjoyed it even if I couldn’t follow the plot.

Earlier this year, I decided to reread all of Ian Fleming’s James Bond novels.  On this site, I’ve written many times about how much I love all of the James Bond films so I thought it would be interesting, especially since a few years have passed since I originally read them, to reread the original novels.

The first Bond novel was Casino Royale.  First published in 1953, Casino Royale introduced the world to not only MI6’s James Bond but also to the CIA’s Felix Leiter, the sinister assassins of SMERSH, and the tragic Vesper Lynd.

The story starts with a deceptively simple mission.  James Bond has been sent to the Casino Royale, with specific orders to play against and humiliate Le Chiffre, a union boss who works for the Russians.  Bond succeeds at his mission but quickly discovers that Le Chiffre is not the type to accept the loss of eighty million francs gracefully.  Bond ends up undergoing a truly horrific torture, one that is described in harrowing details by Fleming.  While it’s not a spoiler to reveal that Bond survives (after all, Casino Royale was followed by 11 novels and 2 short story collections), it comes at the cost of a terrible scar and a terrible tragedy.

In his first appearance, Bond already possesses several of the traits for which he’s best known.  He’s a meticulous eater, a frequent drinker, and a chain smoker.  He’s ruthless and is described as being cruelly handsome.  When Vesper Lynd first meets him, she exclaims that he looks like Hoagy Carmichael, the British musician who Fleming originally hoped would play Bond in the films.

At the same time, while rereading Casino Royale, I was surprised by how passive Bond was for the majority of the book.  Beyond the scene where he plays baccarat with Le Chiffre, Bond really doesn’t take a very active role in his first novel.  When he’s captured and tortured, he doesn’t escape through his wits.  In fact, he doesn’t escape at all.  He’s rescued by SMERSH, who have decided that they no longer need Le Chiffre to launder money for them.  After being rescued, he decides to retire from intelligence work and marry Vesper Lynd.  Vesper Lynd is a double agent but Bond never figures that out on his own.  He only discovers this fact from Vesper’s suicide note.

(Which, of course, leads to the novel famous and bitter final line: “The bitch is dead.”)

In fact, there are times when Bond almost seems to be … well, dorky.  Early on, we’re informed that he hopes to create and make a fortune off of a new drink.  (Minutes after meeting Vesper, he announces that he’s going to name the drink after her.)  When he’s in the hospital recovering from being beaten, he’s hardly the Bond we all know and love.  Instead, he’s rather petulant.  When he explains that he’s quitting the service, he comes across like an angry teenager announcing that he’s not going to go to school anymore.

As for the novel itself, it’s a quick read and, even after all these years, I can see why it caused a stir when it was originally released.  It’s not just that Fleming was telling a spy story that was full of intrigue and deceit.  It’s also the Fleming was giving readers a glimpse into a glamorous world that they probably would never have a chance to experience for themselves.  Fleming describes the casino with such care and attention to detail that you literally feel like you’re there, watching Bond gamble.

For the record, here’s my favorite line from the book.  It occurs shortly after Bond first meets Felix Leiter and discovers that Felix is from my homestate:

“Bond reflected that good Americans were fine people and that most of them seemed to come from Texas.”

And finally, here’s the ingredient for Bond’s drink, the Vesper:

“Three measures of Gordon’s, one of vodka, half a measure of Kina Lillet. Shake it very well until it’s ice-cold, then add a large thin slice of lemon peel.”

(Apparently, some of these ingredients are out-of-date.  I rarely drink so I have no idea.)

Casino Royale was followed by Live and Let Die, which I’ll review tomorrow.

Fans of classic horror movies were dancing in the streets from Karloffornia to Transylvania when THE SHAPE OF WATER won the Oscar for Best Picture last night! After 90 long years, a genre-themed film was given the Academy’s top honor. Guillermo Del Toro, a lifelong fantasy and classic film fan, also received an Oscar as Best Director (and quoted Jimmy Cagney in YANKEE DOODLE DANDY in his acceptance speech!). Coincidentally, last night was the anniversary of the birth of William Alland , producer of THE CREATURE FROM THE BLACK LAGOON, which served as an inspiration for THE SHAPE OF WATER. Somewhere in Hollywood heaven, Mr. Alland, director Jack Arnold, stars Richard Carlson, Richard Denning, Nestor Paiva, and Ben Chapman are all beaming with pride! (Happily, Julie Adams and Riccou Browning are still with us to join in the celebration).


Since at least a few people are currently on spring break, this seemed like a good day to pick a video for a song that’s actually called “Spring Break.”

Of course, neither the song nor the video is really about spring break.  (Or, at the very least, it’s not about what we usually think of spring break being about.)  Instead, the video follows Ex-Cops as the prepare to play at the Museum of Modern Art.  It’s a bit of a documentary.  Meanwhile, a bicyclist (played by Nickolas Kimbrell, who designed the band’s costumes) rides around New York City, while wearing a variety of politically charged t-shirts and interacting with various New York characters.