With 2015 now over, it’s time for me to both make out my end-of-the-year lists and take a look at the films that I saw last year that I have yet to get around to reviewing.  In other words, it’s time to play catch up! 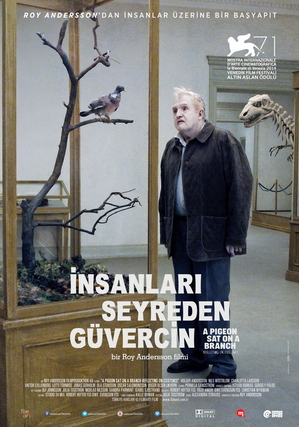 A Pigeon Sat On A Branch Reflecting On Existence is a Swedish film but, just from the title, you probably guessed that this was a European film.  After all, an American film would never have a title quite that long or passive.  We prefer our titles to be short and punchy and to the point: Taken, Spotlight, Die Hard, Concussion.  A Pigeon Sat On A Branch Reflection On Existence is a title that is full of ennui and existential considerations.

At first glance — and I write this from an American point of view — A Pigeon Sat On A Branch Reflection On Existence seems like almost a parody of an experimental European art film.  The performances are low-key and unemotional.  The humor is often dark, cynical, and deliberately obscure.  The film is full of long takes and medium shots, with the camera never moving.  This is a film that demands more than a little patience from the viewer.  I ended up loving it but I have a feeling that a lot of people will give up on the film after the first 15 minutes or so.

Believe it or not, this is not a film about a pigeon.  Instead, it’s a collection of small and increasingly absurd scenes, some of which are connected and some of which are not.  Some characters appear in more than one scene and some do not.  The two most prominent characters are two dour-faced salesman of novelty items.  “We want to help people have fun,” they repeatedly say in the flattest possible tone.  They sell vampire teeth and a mask that they call Uncle One Tooth.  (Whenever they pull out the Uncle One Tooth mask, it leads to someone screaming in horror.)  They also sell bags of laughter, little bags that laugh when you open them and then keep laughing until they suddenly stop.  One of the salesman is feeling depressed and no longer wants to keep selling novelties.  The other salesman has to continually beg him to leave his apartment.

At one point, the two salesman enter a small diner and you can’t help but notice that, looking out the front windows, the diner appears to be sitting in the middle of an apocalyptic wasteland.  Eventually, a group of 18th century soldiers march by and decide to enter the diner.  They are followed by their leader, a preening martinet on a horse who orders that all women leave the diner.  Later, we return to the diner and so do the soldiers.  They’ve obviously lost whatever battle they were fighting but they still stand at attention when the horse reenters the diner, mounted by their dying (or possibly dead) leader.

And it’s all very odd but yet also very fascinating.  The film is so deadpan and so unashamedly absurd in its humor that it’s impossible not to enjoy.  Or at least, that’s the case up until the final 10 minutes or so, at which point the audience is confronted by a crowd of obviously wealthy people casually watching a group of slaves being horrifically burned alive.

What does all this mean?  I think a better question would be, “Does this mean anything at all?”  That said, A Pigeon Sat On A Branch Reflecting On Existence is a fascinating film for audiences that are willing to take a chance on something different.

7 responses to “Lisa Plays Catch-Up: A Pigeon Sat On A Branch Reflecting On Existence (dir by Roy Andersson)”