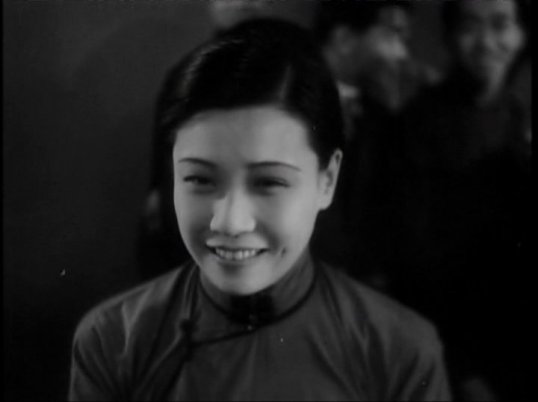 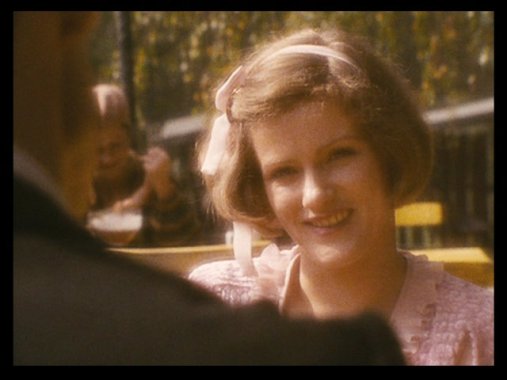 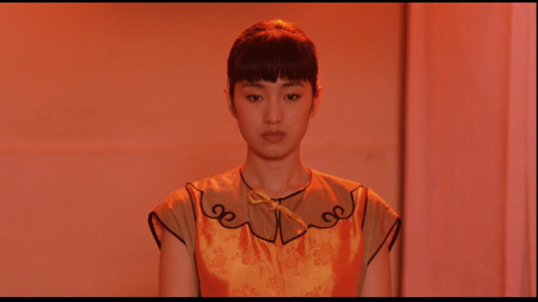 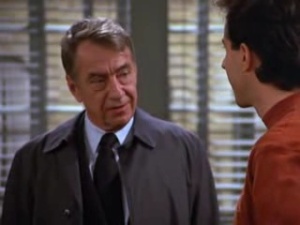 Lt. Joe Bookman is a cop.  He works for the New York Public Library, helping to track down delinquents who vandalize books and fail to pay their late fees.  Yes, the library cop is named Bookman but he has already heard all the jokes.

1971.  That was Bookman’s first year on the job.  Bad year for libraries.  Bad year for America.  Hippies burning library cards.  Abbie Hoffman telling everyone to steal books.  Bookman doesn’t judge a man by the length of his hair or the type of music that he listens to.  Rock and roll was never his bag.  But he’ll make sure you put on a pair of shoes before you step into the New York Public Library, fella!

You know that little stamp, the one that says “New York Public Library?”  That may not mean anything to you but it means a lot to Joe Bookman.   One whole hell of a lot.  Why would Bookman make such a big stink over old library books?  Here’s a hint, junior.  Maybe we can live without libraries, people like you and me.  Sure, we’re too old to change the world.  But what about that kid, sitting down, opening a book, right now, in a branch at the local library and finding drawings of pee pees and wee wees on The Cat In The Hat and The Five Chinese Brothers?  Doesn’t he deserve better? 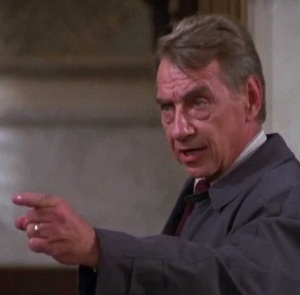 Of the many odd characters who appeared on the sitcom Seinfeld, Joe Bookman (played by Philip Baker Hall) remains one of the most popular.  Unlike Kramer’s lawyer Jackie Chiles or Larry David’s impersonation of George Steinbrenner, Mr. Bookman only appeared in two episodes.  He had a cameo in the series finale and, before that, he appeared in the third season episode, The Library.  The scene where Bookman mercilessly grills Jerry Seinfeld about whether or not Seinfeld returned Tropic of Cancer is a classic, with Hall playing the dogged library cop like a modern-day Inspector Javert and Seinfeld obviously struggling not to laugh.

Seinfeld was famously described as being a show about nothing.  What set Lt. Bookman apart from the show’s regular characters was that he believed in something.  Joe Bookman believed in the sanctity of the New York Public Library.  He was an old-fashioned man with a code of honor, the type of man who take a bullet to save a book.

When he first appeared in 1991, Bookman was already angry about the way the world was changing around him.  He is probably even less happy today.  Where is Joe Bookman right now?  Maybe he’s retired and sitting on a beach, drinking a piña colada and reading Henry Miller.  Maybe.  But I like to believe that he is still on the job, collecting fines and searching for overdue books.

Whatever Bookman is doing now, he will always be there in syndication, reminding us to put our shoes on before stepping into the library and to return our books on time.

Who has not wanted to be a super hero?  When I was growing up, I wanted to be an X-Man until I realized that I would rather be the first American to play the Doctor on Doctor Who.  Over the years, many actors and actresses have actually gotten to be super heroes on both the small and big screen.  Some of them, like Hugh Jackman, became stars as a result.  Others, like Adam West and anyone who has ever played Superman, spent the rest of their career dealing with being typecast.  Of course, a few, like George Clooney, were lucky to survive the experience with any sort of career at all. 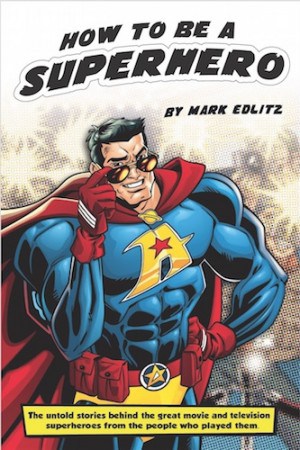 In the new book How To Be A Superhero, Mark Edlitz interviews 30 actors, asking them what it was like to be a hero and how the experience changed (or did not change) their lives and careers.  Edlitz is a good interviewer and all of the conversations are full of interesting tidbits and trivia but what really sets this book apart is the wide variety of people who Edlitz interviews.

While Edlitz interviews everyone who you would expect to be interviewed in a book like this (Adam West, The Adventures of Superman’s Jack Larson, Dean Cain, Clark Gregg, Tom Hiddleston, and others), he also finds the time to speak to and acknowledge some of the lesser known heroes.  John Wesley Shipp and John Haymes Newton (who, in the early 90s, respectively played The Flash and Superboy) both share bittersweet memories of only getting to play their iconic heroes for one season.  Helen Slater reflects on playing the title character in 1984’s Supergirl.  In one of the book’s best interviews, Nicholas Hammond talks about playing Spider-Man on TV in the 1970s and how, as a result of getting into the role, he once tried to foil an actual mugging.  The cast of Roger Corman’s Fantastic Four share their disappointment when they discovered that their movie was never going to be released.  Even Chip Zien, who voiced Howard the Duck, offers up a few less-than-positive memories.

Not everyone that Edlitz interviewd wore a costume.  Leonard Nimoy, in one of his final interviews, assures Edlitz that Spock would win a fight against Kirk.  George Lazenby talks about coming to terms with the experience of briefly being James Bond.  Roger Moore’s memories are much more light-hearted.

Edlitz also speaks with some of the people who worked behind the scenes.  Especially interesting is his interview with screenwriter Tom Mankiewicz, who talks about what it was like to write for both James Bond and Superman.  Among many other stories, Mankiewicz tells how he introduced Sean Connery and Christopher Reeve at a party.  When Reeve asked what he should do if Superman turned out to be a hit, Connery advised him to hire a good lawyer and sue the producers for more money.

Insightful and always enjoyable to read, How To Be A Superhero is a book that belongs in the library of anyone who has ever dreamed of being a hero.

Beethoven’s Big Break (2008) – Some months ago I watched a SyFy movie called Lake Placid vs. Anaconda (2015). During, or shortly after, one of the actresses named Ali Eagle reached out to me on Twitter. As a result, I added several of her films to my queue. I just happened to get around to this one recently. That’s her above. As for the movie, I grew up with the first two Beethoven films and have not seen the third, fourth, and fifth films that come before this one. The family from those films isn’t here. Now we get an animal trainer whose son finds a Saint Bernard and names it Beethoven because of it’s affinity for classical music. The father is helping another animal trainer who unbeknownst to him kidnaps the dog star of a movie in order to extort money from the production company. Problem is that they haven’t actually shot one scene with the dog. As a result, upon seeing Beethoven, they simply recast. What follows is possibly the largest collection of tired, overused, and old jokes I have ever seen in one film. It’s obviously supposed to be a parody in some ways of the Beethoven movies while also being a reboot, but it doesn’t work. There is no reason to see this stinker. I will probably see the other Beethoven sequels, so we can hope that they are at least a little better. 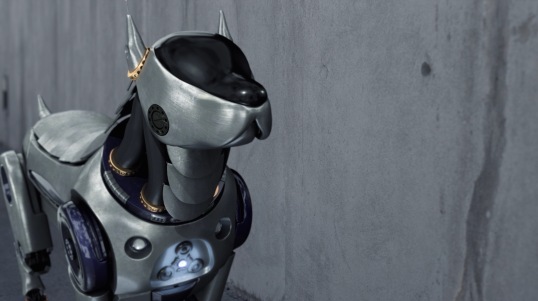 The Adventures of RoboRex (2014) – You know your Transformers movies suck when a children’s film about a good robotic dog and an evil robotic cat is better. This movie is about a kid whose mother passed away and left him with a crystal. He doesn’t know it’s importance until a capsule arrives like The Terminator with an evil robotic cat named Destructo Cat inside. Soon after, a good robotic dog called RoboRex shows up to help the kid. The cat is sent from the future by Professor Apocalypse to instruct and help his younger self get the crystal. What follows is a slow but sure trajectory toward a final battle. In between we do get a nice little fight between the cat and dog that is more exciting than anything in the 4,076 minutes of Transformers: Age of Extinction (2014). I definitely recommend this one, but two things kind of bothered me. Ben Browder is in this and although it’s only been about ten years or so since Stargate, he looks like he has aged quite a bit. The other part is that they never explain how RoboRex ends up at Ben Affleck’s place in Gone Girl (2014). 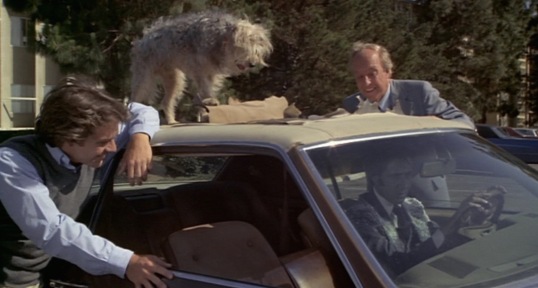 C.H.O.M.P.S. (1979) – This movie has stupid characters and plot, but the dog is awesome! It’s like The Terminator (1984) and Superman (1978). It literally rips off the roof of a car with it’s paws. And you can see from the picture above that it’s a small dog. The movie is about a guy who works for a home security company. Instead of trying to make your standard security system, he looks to nature’s home security system and decides to improve it. He first thinks of creating a robotic Doberman, but probably realized that people had already seen Dobermans rob banks in earlier movies and just copied his own dog instead. The movie basically has three things going on. First, the dog is on an endless rampage to catch these two criminals that might as well have stepped out of Home Alone (1990). Second, the guy and his girl are trying to sell the company on the idea of a robotic dog. Third, is this big black dog that occasionally pops up whose thoughts we can hear. That dog has some mouth on it. It says, “Up your poop, granny” and “Shit”. With Hot to Trot, that makes two talking animal movies I’ve seen recently where the talking animal says “shit”. If you can put aside the problems and just focus on the cool dog, then this one can be fun. It’s a little weird to see the dog’s eyes light up and the head get removed though. 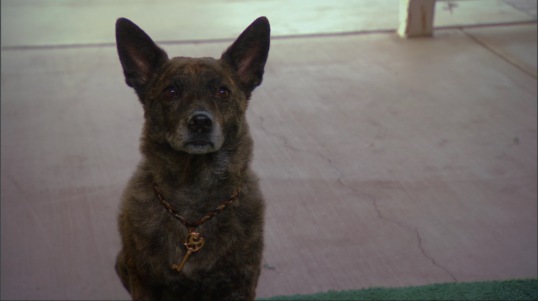 The Amazing Wizard of Paws (2015) – This is a movie that would have the Cinema Snob saying “What the fuck!” The script is a mess. The movie begins with what looks like Snape cornering Gandalf against a tree. Gandalf is holding a book. That book will be important…sort of. Next a dog meets up with a kid who has lost his father in a car accident. Snape visits him in the backyard, but doesn’t seem to do anything. Then we jump seven years into the future. That’s where this movie starts to just go wherever it feels like. It sets things up that the dog can talk, the book is magic, and the kid is supposed to protect it using magic. However, despite this evil wizard who wants the book, the kid spends most of his time signing up for talent shows in order to get money so his mother can keep the house. You will find yourself saying, “And the wizard went where? What happened to him wanting the book?” I can’t recommend this movie at all. A total skip. It’s sad because I really do like the dog. 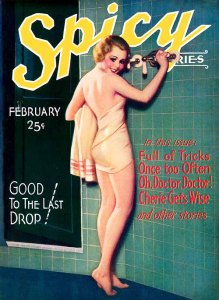 Born in Philadelphia, Pennsylvania and educated at the Pennsylvania Academy of Fine Arts, Earle Bergey is considered to have been one of the most prolific and influential pulp fiction artists of the 20th Century.  His most famous cover was the one he painted for Gentleman Prefer Blondes in 1948.

Check out that cover and some more of Earle Bergey’s work below! 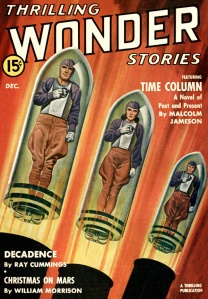 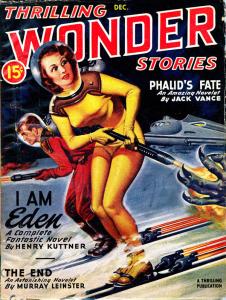 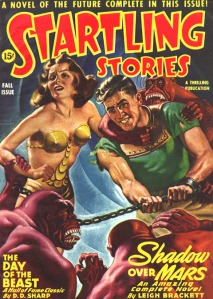 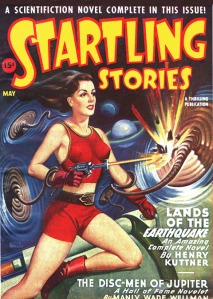 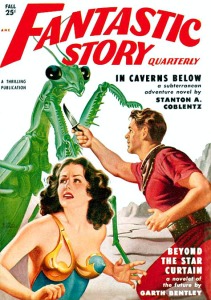 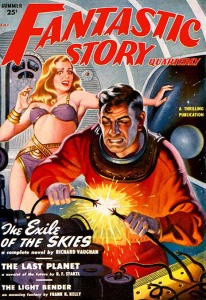 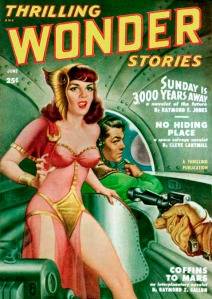 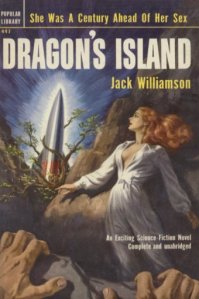 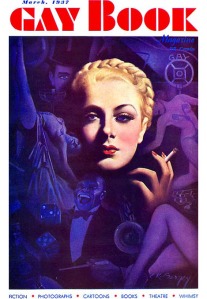 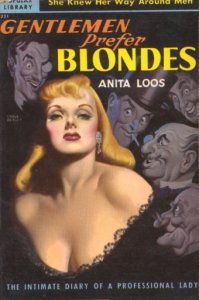 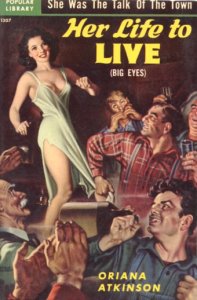 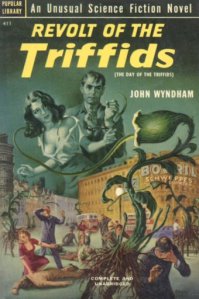 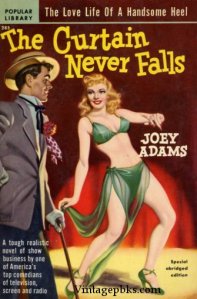 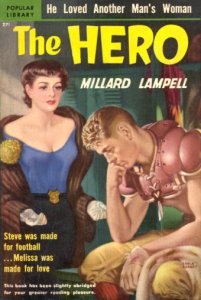 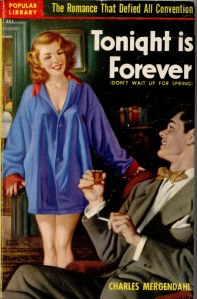 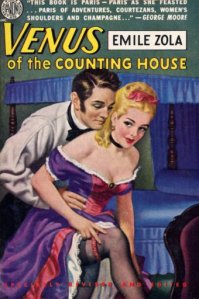