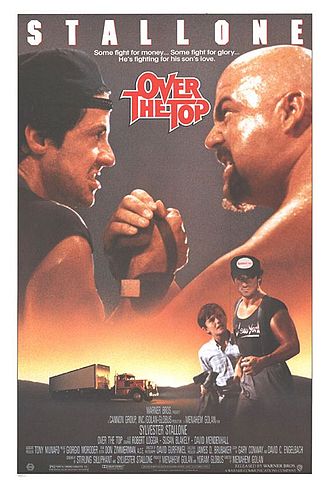 For the longest time, whenever I would see a movie at the DFW Alamo Drafthouse, I would always found myself watching a clip that the Alamo management chose to show before the actual movie.  I can’t really remember the specific reason why they were showing the clip.  I imagine it was meant to advertise some special series of testosterone-fueled movies but I really couldn’t tell you for sure.

However, I will never forget the clip itself.

It basically featured Sylvester Stallone arm wrestling a bald giant with a mustache.  As they both struggled to see who would slam down whose wrist first, a crowd of rednecks went wild.  The bald giant growled and groaned.  Meanwhile, Sylvester Stallone was busy … stalloning.  Seriously, you would not believe some of the expressions that passed across Stallone’s face over the course of this one scene.

And finally, after much growling and a lot of constipated facial expressions, Stallone slammed down the guy’s wrist.  The crowed went wild.  Stallone stood up and did the Rocky pose with both of his arms raised in triumph.

Meanwhile, in the audience, I said, “What zee Hell did I just watch?”

(Yes, I did pronounce the with a z.  It was cuter that way.)

Well, it turns out that the scene was taken from a 1987 film called Over The Top.  Now, the scene itself isn’t included in the montage below but I think watching this video will still give you a general sense of what Over The Top is like.

Over The Top turns up on cable fairly regularly and that’s how, after several visits to the Alamo, that I ended up watching the actual film.  Over The Top is an appropriate title because the film’s melodrama truly is over-the-top.  It’s in no way good but it definitely has a “what the Hell am I watching” sort of appeal.

Stallone plays Lincoln Hawk and let’s just take a few minutes to appreciate that name.  When you’ve got a name like Lincoln Hawk, you know that you’re never going to be an accountant or a teacher or … well, really, anything that a person not named Lincoln Hawk would be.  Instead, when you’ve got a name like Lincoln Hawk, you become a truck driver.  And you marry a rich woman (played by Susan Blakely), despite the disapproval of her judgmental father (Robert Loggia).  You have a son and, if you have a sense of humor, you name him Booth Hawk.  Or, in the case of this film, you name him Michael Cutler Hawk (played by David Mendenhall, who was also in Space Raiders) and send him off to military school.

When Lincoln’s wife dies, her father takes custody of Michael.  Even after Lincoln rams his truck into the front of the mansion, Michael still wants to stay with his grandfather.  However, Lincoln can’t spend his time mourning the loss of his family.  He has big plans — like starting his own trucking company.

And how is Lincoln going to do that?

By winning the World Armwrestling Championship, of course!

(Oh come on … that makes total sense in a 1987 Sylvester Stallone movie sort of way!)

Will Lincoln win the championship?  Will Michael bond with his father?  Will Lincoln and his father-in-law develop a grudging respect?  If you don’t know the answer, you’ve never seen the movie before…

Remember how, when I was talking about the Kevin Bacon film Quicksilver, I mentioned how some films were obviously made by people who simply could not understand that not everyone was as fascinated by some silly activity as he or she was?  That’s definitely the case with Over The Top, a film that takes place in an alternative universe where everyone in the entire world is obsessed with arm wrestling.

And it’s all rather silly but it’s also very watchable, in much the same way that American Anthem was very watchable.  Over the Top is not a good film but it’s just so over the top that you owe it to yourself to see it at least once.

7 responses to “Embracing the Melodrama Part II #79: Over the Top (dir by Menahem Golan)”