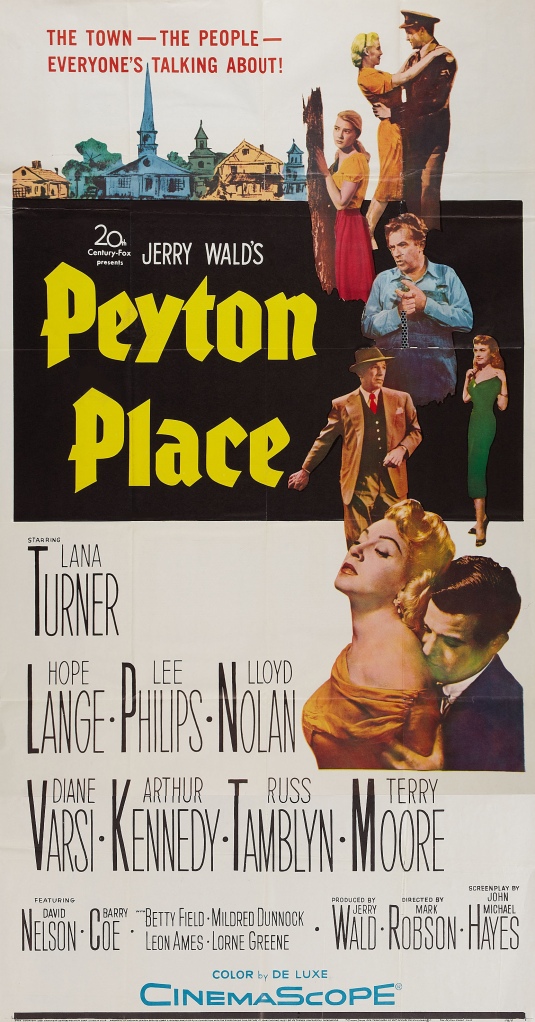 “Just remember: men can see much better than they can think. Believe me, a low-cut neckline does more for a girl’s future than the entire Britannica encyclopedia.” — Betty (Terry Moore), speaking the truth in Peyton Place (1957)

Sex!  Sin!  Secrets!  Scandal!  It’s just another day in the life of Peyton Place, the most sordid little town this side of Kings Row!  It’s also the setting of the 1957 best picture nominee, Peyton Place.

Peyton Place is a seemingly idyllic little village in New England.  The town is divided by railroad tracks and how your fellow townspeople views you literally depends on which side of the tracks you live on.  As the film itself shows us, the right side of tracks features pretty houses and primly dressed starlets.  The wrong side of the tracks features shacks and a bunch of people who look like the ancestors of the cast of Winter’s Bone.  The difference in appearance is not particularly subtle (but then again, the same thing could be said for the entire film) but, regardless of which side of the tracks live on, chances are that you’re keeping a few secrets from the rest of the town.

On the right side of the tracks, you can find Constance McKenzie (played by Lana Turner, who is just about as convincing as a New England matron as you would expect a glamorous Hollywood star to be), a dress shop owner who is so prim and proper that she literally flies into a rage when she comes across her daughter kissing a boy.  Could it be the Constance’s repression is the result of her once having been a rich man’s mistress?  And will the new high school principal, the progressive and rather dull Mr. Rossi (Lee Phillips), still love her despite her sordid past?

Constance’s daughter is Allison (Diane Varsi) and poor Allison just can not understand why her mother is so overprotective.  Will Allison ever find true love with the painfully shy Norman Page (Russ Tamblyn) or will she be forced to settle for someone like the rich and irresponsible Rodney Harrington (Barry Coe)?

Rodney, for his part, is in love with Betty (Terry Moore), a girl from the wrong sides of the tracks.  Rodney’s father (Leon Ames) is the richest man in town and makes it clear that he will not allow his son to marry someone with a “reputation.”  Will Rodney get a chance to redeem himself by going off to fight in World War II?

And what will happen when Rodney and Betty go skinny dipping and are spotted by a local town gossip who promptly mistakes them for Norman and Allison?  Reputations are at stake here!

Meanwhile, over on the bad side of the tracks, Lucas Cross (Arthur Kennedy) sits in his shack and drinks and thinks about how the world has failed him.  His long-suffering wife (Betty Field) works as housekeeper for the McKenzie family.  Meanwhile, his abused daughter Selena (Hope Lange, giving the film’s best performance) is Allison’s best friend.  When Lucas’s attempt to rape Selena leads to a violent death, the sins and hypocrisy of Peyton Place are revealed to everyone.

Peyton Place is a big, long  movie, full of overdramatic characters, overheated dialogue, and over-the-top plotting and, for that reason, I absolutely love it!  Apparently, the film was quite controversial in its day and the scenes where Arthur Kennedy attacks Hope Lange still have the power to disturb.  However, the main reason why I enjoy Petyon Place is because anything that could happen in Peyton Place does happen in Peyton Place.

Seriously, how can you not love a film this sordid and melodramatic?