I’ve always loved Asia Argento because, as both an actress and a public personality, she is tough, hard, and sexy all at the same time.  She’s not one of those actresses who feels the need to hide who she really is.  Watching her on-screen, you realize that she doesn’t give a fuck whether you like her or not.  Instead, she’s going to do whatever it is that she wants to do and, if you’re lucky, you might get to watch.  Some hold her responsible for the erratic output of Dario Argento’s post-Opera career but those people far too often fail to take into account that Asia, with her naturally off-center presence, has often been the most interesting thing about Dario’s later films. (Say what you will about Trauma, The Stendhal Syndrome, and Mother of Tears, they’re all better with Asia than without her.)  Asia Argento is one of those talented actresses who could never have played Ophelia because no one would ever believe that she would so easily drown.  Instead, she’d simply pull herself out of the water and then go kick Hamlet’s ass for being so indecisive.

In the year 2000, Asia Argento made her directorial debut with the underrated Scarlet Diva.  In Scarlet Diva, Asia plays Anna Batista, a 24 year-old Italian actress who, having won both acclaim and awards in Italy, is now being tempted with offers to come out to Hollywood.  Over the course of this frequently (and intentionally) disjointed film, Anna is forced to deal with the dark reality of being young, rich, and famous.  (Yeah, yeah, I know you’re rolling your eyes but just calm down…)  After being told that she’ll costar with De Niro, she finds herself playing Cleopatra in a hilariously bad movie that does not co-star Robert De Niro.  She meets a sleazy producer (Joe Coleman) who invites her to his hotel room and then promptly undresses and demands that she “earn” a part in his next film.  Anna runs from him and the naked producer chases after her with the camera focused (in close-up) on his hairy ass all the way.  While dealing with all of that, Anna also find time to visit her best friend in Paris, just to discover that she has spent the last two days bound and gagged in bed.  She also buys drugs underneath a highway overpass and suffers from frequent dream sequences and flashbacks to growing up with her mentally unstable mother (played by Asia’s real-life mother, Daria Nicolodi).

And yet, during all of this, Anna can still find happiness because she thinks that she’s in love with rock star Kirk Vaines (Jean Sheperd, playing a role that was written for Vincent Gallo).  When Anna discovers that she’s pregnant, she decides not to have her usual abortion and instead to keep the baby.  However, when Kirk reacts to Anna’s news with indifference, it leads to one of the longest (and most emotionally raw) running sequences that I have ever seen, as the pregnant Anna flees down the streets of Rome…

Just to judge from the movies that various actor have made about the trials of being a star, fame is a special sort of Hell, the type that is dominated with surreal dream sequences and frequent claustrophobia.  That’s certainly true of Scarlet Diva, which is perhaps one of the most self-indulgent films ever made.  And yet, it’s that very self-indulgence that makes Scarlet Diva so much more watchable and, in its own way, likable than most debut films from actors-turned-directors.  For all the drama and pain that Anna goes through, Asia Argento seems to understand just how narcissistic this film truly is and, in a few scenes, it’s evident that she’s gently mocking her own “poor me” self-indulgence.

Ultimately, Asia seems to be saying that Anna (and probably, at the time she made this film, Asia herself, since she has said that this film is partially autobiographical) is her own worse enemy.  Hence, this film — which was made with an admirable lack of concern about going too far or for being TMI — is a massively cathartic work for all of the rest of us who are also occasionally our own worst enemy.

Yes, Scarlet Diva may be a self-indulgent, narcissistic film.  It’s also a very brave and honest film that deserves a lot more praise and attention than it has received. 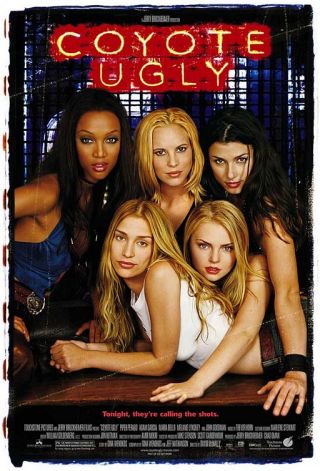 I wonder what it would be like to be in the Movie, "Coyote Ugly" 😋😍🔥

Unfortunately, 2000’s Coyote Ugly is not that film.  In fact, Coyote Ugly is such a thoroughly predictable film that it’s perhaps not surprising to discover that it’s also a film that’s been embraced by a lot of people.  It never ceases to amaze me how, whenever Coyote Ugly shows up on cable, twitter is full of viewers declaring their love.

Coyote Ugly tells the story of  Violet (Piper Perabo), who may look like an ordinary waitress from New Jersey but who aspires to be a songwriter in New York City.  As the film begins, she is in the process of leaving her loving but overprotective father (John Goodman) and her best friend (Melanie Lynesky) so that she can move to the big city and never give up on her dream.  Before she leaves, she’s asked to sign a piece of paper so that it can be tacked to the wall of the local pizza place.  It’s a tradition, apparently.  Before anyone leaves town for New York, they’re asked to leave behind an autograph.  The wall is covered with signatures, indicating that apparently every waitress in New Jersey thinks that she’s a songwriter.

Violet moves to New York and, at first, it seems like she might not make it.  Her apartment is a dump and her neighbors get mad whenever she sings.  (Violet responds by setting up a small recording studio on the roof of her building.)  Nobody is willing to listen to her demo.  About the only good thing that happens to Violet is that she meets Kevin (Adam Garcia), an Australian who encourages her to never give up on her dreams.

Eventually, Violet finds herself in one of those all-night diners that always seem to pop up in movies like this.  She notices that the girls seated at a table near her seem both to be happy and to have a lot of money.  It turns out that they work at the Coyote Ugly Saloon and since one of them (played by Tyra Banks, in a cameo) is quitting so she can go to law school, that means that there’s soon going to be an opening at the bar.

After talking to the Coyote’s owner, Lil (Maria Bello), Violet manages to get a job as a bartender.  Along with serving drinks to a combination of hipsters, frat boys, and stock brokers, another part of Violet’s job is to jump up on the bar and dance.  Eventually, she even gets a chance to sing when it’s discovered that the sound of her voice (or, to be technical about it, LeAnn Rimes’s voice since Rimes provided Violet’s singing voice) can somehow inspire drunks to stop fighting and act civilized.  Violet bonds with her fellow bartender Cammie (Izbella Miko) while the other bartender, Rachel (Bridget Moynahan) takes an instant and almost pathological dislike to her.  Lili is tough, Cammie is a flirt, and Rachel likes to set things on fire.  That’s about all we find out about them.

Even when her father disowns her for working at the Coyote and even when she and Kevin have a fight over her extreme stage fight and Kevin’s refusal to talk about his troubled past, Violet never gives up on her dreams!

And, if you can’t guess every single thing that happens in Coyote Ugly before it happens, then you really need to start watching more movies.

Coyote Ugly is the greatest movie of all time💕

Despite the fact that the movie is named after the Coyote Ugly Saloon and it’s full of scenes of Violet and her co-workers dancing on top of that bar, the Coyote Ugly itself is actually pretty superfluous to the overall film.  The film itself is all about Violet pursuing her dream to become a songwriter and the bar itself really doesn’t play that major of a role into her eventual success.  Instead, it’s just a place where she works.  Violet could just as easily have worked at a particularly rowdy Dave and Buster’s and the overall film would have turned out the same.

And that’s a shame because, while watching the film, it’s hard not to feel that a movie about either Lil, Cammie, or Rachel (or, for that matter, a film about Tyra Banks going to law school) would be a thousand times more interesting that any film about boring old Violet.  I mean, here we have a film named after a business that is owned by a woman and that specifically employs and potentially empowers other women and what does the movie do with all of this material?

It tells a story so predictable and so simplistic that it could just as easily been generated by a computer program.

Coyote Ugly is a massive mixed opportunity but, for whatever reason, some people seem to love it.

And good for them. 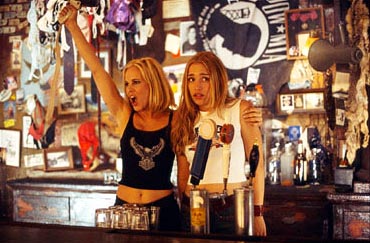