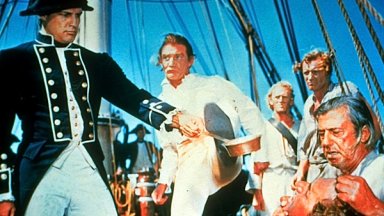 As in the 1935 version of the story, we once again follow the HMS Bounty as it sails from England to Tahiti.  Again, the ship’s captain is the tyrannical Capt. Bligh (Trevor Howard) and again, the eventual mutiny is led by Fletcher Christian (Marlon Brando).  While the 1935 version presented Christian as the unquestioned leader of the mutiny, this version features an indecisive Christian who is goaded into leading the mutiny by a seaman named John Mills (Richard Harris).  Whereas the 1935 Fletcher Christian never regretted his decision, the 1962 version seems to regret the mutiny from the moment it occurs and literally spends the rest of the film trying to get the mutineers to agree to return to England with him.

Perhaps the biggest difference between the two versions of Mutiny on the Bounty is that the 1935 version was a 2-hour film that felt shorter while the 1962 remake lasts 3 hours and 15 minutes (including intermission) and feels even longer.  The 1962 version was made at a time when Hollywood was attempting to counteract the influences of European art films and American television by making films that were a thousand times bigger then they needed to be.  Whereas the 1935 Mutiny on The Bounty was all about telling the story as efficiently as possible, the 1962 Mutiny on the Bounty was about telling audiences, at every possible moment, that they couldn’t see anything like this on television or in some French art film.  Audiences in 1962 may very well have been amazed by the endless shots of Tahitians dancing and the Bounty rocking on the ocean but, for modern audiences, the entire film just feels incredibly slow and padded.

Another major difference between the two versions of Mutiny on the Bounty is that Marlon Brando, to be charitable, was no Clark Gable.  Much as Clark Gable could never have been a credible Stanley Kowalski or Vito Corleone, Brando could never have been a convincing Fletcher Christian.  Whereas Gable played Christian as the epitome of masculinity, Brando’s internalized, method approach serves to turn the character into something of a wimp.  It doesn’t help that Brando’s twangy attempt at an English accent sounds like every bad Monty Python impersonation that’s ever been heard in a college dorm room.

The 1962 Mutiny on the Bounty was a notoriously troubled production.  Marlon Brando was reportedly bored with the role of Fletcher Christian (which might explain why he gave such an eccentric performance) and he reportedly used his star status to demand and make constant changes in the script.  The film’s original director, Carol Reed, reportedly quit over frustration with Brando and was replaced by Lewis Milestone.  Milestone, a veteran director who had started his career during the silent era, proved just as ineffectual when it came to controlling Brando.  By the end of the film, Richard Harris was literally refusing to film any scenes opposite Brando.  The end result was that the film went wildly over schedule and over budget.

Despite being reviled by even contemporary critics, Mutiny on the Bounty received seven Oscar nominations, including Best Picture.  The nomination was a triumph for the studio system as MGM reportedly directed all of its employees to vote for the film. That may have been enough to win Mutiny a nomination for best picture but the actual Oscar went to Lawrence of Arabia.

3 responses to “Lisa Marie Reviews The Oscar-Nominated Films: Mutiny on the Bounty (dir. by Lewis Milestone)”