Super, a very dark and very Catholic comedy that pretends to just be your standard issue super hero movie, played for about three weeks down here in Dallas.  Despite a cast that included Kevin Bacon, Liv Tyler, Ellen Page, and Rainn Wilson, it kinda came and went like a ship in the night.  It got a few vaguely confused reviews from the local critics and the audience that I saw the film with seemed to be pretty confused as to what they were watching.  Which is a shame because if you give the film a chance, you’ll discover one of the best films of 2011.

In Super, Rainn Wilson plays a short order cook who, at various points in his life, has had visions in which he believes God has spoken to him.  When his wife, an ex-drug addict played by Liv Tyler, leaves him for a sleazy club owner and low-level drug dealer (Kevin Bacon), Wilson sinks into a deep depression until finally he has a vision in which God sends a bunch of hentai-style tentacles to cut off the top of Wilson’s head and literally place an idea in there.  That idea is for Wilson to become a costumed super hero and fight “evil.”

So, that’s what Wilson does, dressing up in what looks like a low-rent Halloween costume, and taking on all those who he considers to be evil and/or doing the wrong thing.  This could be anything from dealing drugs to cutting in line at the movies.  (And this is a big reason why I loved Super because it asked the same question that I always wonder when I see a super hero movie — i.e., who is to say what’s wrong and what’s right?)  Calling himself The Crimson Bolt, Wilson soon becomes a cult figure in the city but he still finds himself incapable of getting Tyler away from Bacon.

Eventually, he finds himself saddled with a sidekick.  Ellen Page, giving a performance just as award-worthy as her more acclaimed role in Juno, plays Libby, who works in the local comic book store.  She is the only person who figures out that Wilson is actually the Crimson Bolt and she quickly decides that they should work together.  Calling herself Boltie, Page quickly turns out to be just as zealous in the pursuit of “justice” as Wilson.  Unlike Wilson, who sees himself as being on a holy mission, Page appears to just be happy to have an excuse to kill people. 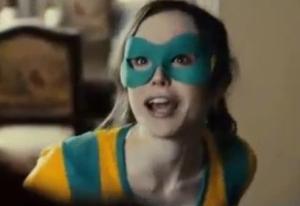 It all leads to the expected final confrontation with the bad guys and a surprisingly poignant ending which forces the viewer to reconsider what they thought they knew about every character in the film.

Super’s low-budget is obvious in almost every frame of the film but it works to the movie’s advantage, creating an almost defiantly gritty atmosphere.  The film is also full of good performances.  I already mentioned Page but, in the lead role, Rainn Wilson is perfectly cast.  For those of us who love him on The Office, it’s sometimes hard to realize that Wilson is not Dwight Shrute, he’s just an actor playing a role.  However, with Super, Wilson proves himself to be a charismatic actor who, if given the right role, can easily carry the film.  Towards the end of the film, one of the bad guys taunts Wilson for concerning himself with seemingly minor things like people cutting in line.  Wilson shouts, “You shouldn’t cut!” with such righteous fury that it becomes clear  that he’s not talking about cutting in line as much as he talks about living in a world where people just no longer seem to care about doing the right thing.  It’s an unexpectedly effective scene and line and Wilson handles it perfectly.

Super is the latest film from a genius named James Gunn.  Now, I should admit that I am like crazy in lust with James Gunn.  Seriously, he’s handsome, he’s funny, he’s talented, he’s hot, he’s vulnerable, he’s dangerous, he’s Irish, and he comes from a Catholic background, which is pretty much a perfect description of my dream man.  Plus, he talked to me once on twitter and as a result, I got all giggly and red-faced and I sent him all of these gushy tweets which he never responded to, probably because I was like totally coming across like some sort of psycho stalker type.  So, some people are probably saying, “Well, gee, Lisa Marie, are you sure you’re not just letting your damp panties review this film as opposed to your unbiased judgment as a film watcher?”  And to those people, I say, “Shame on you and watch your mouth.  And speaking of mouths, guess where my mouth would be if I ever met James Gunn…”

But let’s get back Super.  Super has been frequently compared to Kick-Ass (even though Super actually went into production first) and, on the surface, they do appear similar.  It’s only when you dig and look under the surface that you discover that Super and Kick-Ass have about as much in common as I do with that overly friendly girl who always takes our tickets at the Angelika.  (She’s the same girl who needs to stop smiling so much at Jeff every time we try to get popcorn.  Seriously, not kidding.)  While Kick-Ass was undeniably violent, it was also one of those films where the violence was rarely lingered over.  Super is not only incredibly violent but it’s also incredibly bloody.  Gunn doesn’t just show us the violence but he shows us the end results of the violence as well and, as a result, the audience is forced to consider how much we love to see people getting shot in the head just as long as we don’t have to worry about seeing the body afterwards.  Whereas Kick-Ass’s Aaron Johnson was portrayed as being a comic book fan who got to live out his fantasy, Rainn Wilson in Super is specifically portrayed as not being a comic book fan as much as he’s just a genuinely unstable guy who becomes a super hero in order to maintain the delusional black-and-white morality of his worldview.  Whereas Chloe Grace Moretz’s Hit Girl was portrayed as having been raised to kill, Ellen Page’s Boltie kills simply because she now suddenly has the opportunity to do so.  Finally, Kick-Ass actually ended up fighting true evil doers whereas the villains played by Kevin Bacon and Michael Rooker, in Super, are probably the most stable and sensible characters in the entire film.

In short, Super is that perfect rarity — a truly transgressive work of popular entertainment.

Yes, Super is one of those films that delights in challenging and even ticking off the audience.   The common filmgoer watches and asks, “If it’s a drama, then why is it so funny?  If it’s a comedy, then why does Rainn Wilson’s heartbreak seem so real and sincere?  If Rainn Wilson and Ellen Page are the good guys, why does the film suggest that they both might be sociopathic?  If Kevin Bacon’s the bad guy, why is he so likable here?”  As a result, the common filmgoer probably walked out of Super feeling confused and slightly annoyed that things didn’t work out the way they were expecting.

Super was made with you in mind.

7 responses to “Lisa Marie Gets Super (dir. by James Gunn)”