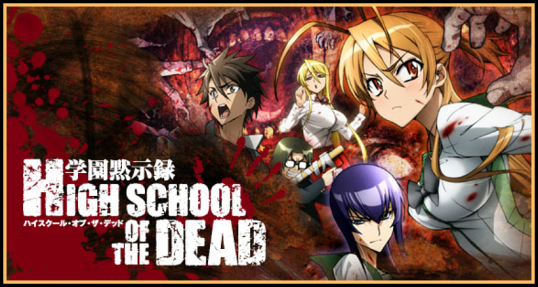 We are down to the last final episodes of this first season of Madhouse’s anime series adaptation of the zombie and ecchi manga series, Highschool of the Dead. The last episode was the start of the calm before what I hope to be the major storm that will take this series into a second season.

Episode 11 didn’t linger on too much on the fanservice side of the series with the exception of an all-too-brief look inside the school bus of Shido-san and his sex cultists. We get a glimpse at how Shido deals with the students who don’t conform to his twisted (albeit must be quite fun) outlook on the new world order as it stands now. The manga had shown that particular sequence of why that one student was thrown off the bus to be taken by the zombies. In this episode we didn’t see what caused his expulsion, but got a sense that the student didn’t want to join in on the bus orgy going on between the students with Shido-san acting as a sort of Aleister Crowley-like figurehead.

While inside the Takagi compound it looks like the episode skipped some more of the manga and didn’t show how Takagi’s father was finally swayed to allow Kohta to keep the groups weapons. I can understand the Madhouse writers trying to cram as much of the manga into a 13-episode season, but the way they’re going about things they could catch up to the manga by episode 13 which would definitely might be a sign that a second season won’t be in the offing. Here’s to hoping that the writers were just trying to move things along to the crisis which sends the group out of the compound and back into the dangers of the city-proper.

While the fanservice was limited the harem aspect of the story continued to grow as Rei literally threw herself at the mercy of Komuro but to no avail. Does Rei know that Saeko and Saya may be competing with her for Komuro’s attention? If that’s the case then Komuro definitely has shown quite a bit of restraint when it comes to Rei’s increasingly aggressive advances. There’s also the fact that Komuro and Saeko may have already sealed their partnership a few episodes past though we never really saw it but definitely implied.

The arrival of Shido-san into the compound definitely explains why Rei was so adamant to leave the safety of the bus early in the season. The fact that Rei dismissed Shido-san as less than worthy of her attention was a nice touch even though this could become a major problem for the group down the line. Even in the manga the fate of Shido-san and his group of students were not truly explained though not all of them could’ve survived their subsequent exile.

With two episodes left and with the major superpowers throwing nukes at each other, I hope that this calm has finally ended and the storm that’s been brewing since the group arrived at the Takagi compound can finally smash into the city. If there’s to be no second season then these last two episodes need to put the previous 11 in terms of action, horror and fanservice to shame. It’s the only way for the series to go out with a huge bang.

One response to “Highschool of the Dead: Episode 11 – First Impressions”