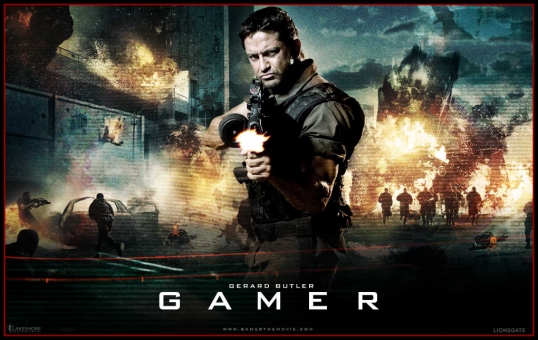 No one will ever mistake the writer-director duo of Neveldine/Taylor (Mark Neveldine and Brian Taylor) as the next Coen Brothers, but they definitely have made their mark in creating entertaining films which some have called exploitative, pandering to the lowest common denominator and exercises in excess. Maybe these critics are right, but they also seem to view the films by these two filmmakers through the narrow-minded lens of their elistist and so-called cineaste sensibilities. They won’t be the next Coen Brothers but they’re way ahead of other so-called filmmaker duos such as The Spierig Brothers (Undead and the pretentious and awful Daybreakers) or The Strause Brothers (AvP: Requiem and the awful Skyline). They came onto the scene with their cult classic action thrillers Crank and it’s sequel, Crank: High Voltage.

Their third film took the gaming influences so inherent in their first two films (which for all intents and purpose were video games that happened to be film) and went the next step. Gamer is all about a near-future world where two games with on-line social media foundations have become the rage of the entertainment world. One is a game called “Society” that looks to be the nightmare evolution of privacy advocates everywhere to the on-line virtual world Second Life and The Sims. It is the other game in this film which makes up the foundation of the film’s plot. “Slayers” takes the ultra-popular multiplayer on-line experiences of games such as Call of Duty and HALO to the next level by allowing gamers to actually control real people (inmates sentenced to death) to act as their avatars in a real-life battlefield arena with real weapons and real deaths.

These games which have become the obsession of hundreds of millions of people worldwide are the brainchild of the film’s antagonist. Michael C. Hall plays the creator of these games and his performance looks to combine the sociopathic charm of his Dexter character with that of Steve Jobs is the latter was openly honest about his douchebag tendencies. Playing his opposite is the character of Kable who happens to be the reigning champion of the game Slayers and who knows a secret that could tear down the billion-dollar empire created by Castle. Gerard Butler plays the desperate but very capable inmate Kable who just wants to survive past the final match and earn his freedom thus return to his wife and young daughter on the outside.

Gamer posits the question of how far are we willing to go to experience realism in our games and entertainment. With the game Society people pay to be able to control other people in a social setting (albeit in a controlled area). These so-called avatars will do anything and everything their real-life controllers tell them to do. In the film these avatars get paid to become virtual slaves and with most people signing up for the job being the socially desperate. Their situation is not so dissimilar from the condemned inmates who populate the game Slayers. The film hits the audience with a sledgehammer that these virtual entertainments have become popular worldwide because people have stopped looking at these “volunteers” as real people. Morality has been replaced by the need for instant gratification by way of these virtual on-line systems.

The film doesn’t make any apologies for the heavyhanded delivery of it’s message and also doesn’t skimp on the entertainment side of the equation. Neveldine/Taylor have shown that they have a certain flair for creating visual chaos and action on the screen. Their unique visual style does look like something out of a video game especially those from hyperrealistic shooters such as Call of Duty and its ilk. The filmmakers have always accomplished the high-quality visual look of their films despite the low to modest budget given to them by the studios they’re working for. Gamer is no exception and the film benefits from the decision by these two filmmakers to continue working with the Red One digital cameras thus allowing them to add in the visual effects right into the shot scenes the very same day of shooting.

It’s this very style of hi-tech guerrilla filmmaking which makes Neveldine/Taylor this current era’s Cormans. Unlike most low-budget filmmakers they don’t use the size of their budget to dictate how their films turn out visually, aurally and narratively. The first two this film succeeds in ways that makes an audience think the film was higher budgeted than it really was. The third would depend on the viewer whether the film succeeds or not. For those who seem intent on viewing every film as if they were made to be worthy of high awards and accolades would probably dismiss and hate this piece of exploitation cinema. Gamer succeeds in a narrative sense because it delivers on the promise of telling a story about a world where free will has been seconded to control in the need of a population in search of a the next virtual playground. It’s a heady premise that has been explored in past films such as the Matrix Trilogy and another film similar to this one which came out weeks later in Surrogates.

Gamer doesn’t have the philosophical and existential sermoning in combination with futuristic action sequences as the Wachowski Brothers’ trilogy, but it does have the same visceral action DNa as those three films and also more entertaining than the Bruce Willis vehicle Surrogates. This film will appeal to the very people who it condemns as sheep to the rising tide of on-line control in entertainment, but then that’s what all exploitation films tend to do best. Cater to the very people it uses as examples of what’s wrong in society and build an entertaining film around them and what they represent.

The film’s cast revolves around Gerard Butler and Michael C. Hall and the roles they play. Whether its Amber Valletta playing Kable’s desperate wife who has sold herself to become a controllable avatar in Society to try and earn enough to get her young daughter back or to Logan Lerman playing the role of Simon the gamer who controls Kable during the Slayer matches. They all do enough with their roles to keep their characters from becoming less than one-notes. Again, for some having a film with characters that are quite basic and one-note might make for a bad film, but when put into context of the story being told they’re quite good and needed to become motivators for Butler’s character.

In the end, Neveldine/Taylor have made a modern day exploitation and grindhouse film in Gamer without having to resort to the visual tricks used in the Rodriguez/Tarantino grindhouse homage film Grindhouse. A film doesn’t need to have film scratches, overexposed film stock, scratchy audio track or missing film reels to be grindhouse. It just have to espouse the very nature of the films which made up the kind of films which became prime example of grindhouse/exploitation cinema. Gamer won’t win any awards, but I suspect that more people who saw it were entertained by it’s blatant, in-your-face entertainment than would normally admit to it. It’s a film that has cult status and guilty pleasure written all over it.

Plus, this film is definitely worth at least a curiosity viewing if just to see the musical number performed by Michael C. Hall at the climactic sequence near the end of the film. I don’t think any film has ever combined gratuitous violence, musical dance numbers using bloodied death row inmates and Michael C. Hall singing Frank Sinatra’s “Ive Got You Under My Skin“. That sequence alone is worth a rental or Netflix Instant streaming.