I meant to write this up some days ago when I actually finished this set, however I couldn’t figure out how to insert a link in here (and still can’t) so as is typical for me, I got pissed off and just gave up.  However, with a show this good, it would be very remiss of me to not share it.  I have already written up on the series in general with an Anime You Should Be Watching post (which is what I meant to link in here, but alas, the Add Link button remains greyed out) so this is just about the third and final season of Aria.

As I mentioned in that previous review, this show is the very definition of Slice of Life shows.  In the previous seasons of Aria, it’s largely about the wonders that Akari sees on her new homeworld of Aqua (Mars), and the people she meets and befriends.  Throughout those times, she and her friends are striving towards becoming Prima Undines, basically gondoliers like we have in Venice.  This season the focus is much more on Akari and her friends realizing their dreams and the passing of the torch from the Three Great Water Fairies.  But, like with all slice of life series, the destination isn’t what’s important.  No one who watches this would think that Akari is going to fail her exam.  We know she’ll become a Prima.  The important thing is the journey, and seeing Akari and her friends come to terms with the fact that when they do reach their goals, that things aren’t going to be able to stay the same as they were before.  Needless to say, there’s going to be a need for a lot of tissues.  It’s not tragic sad like a Clannad is, but rather just so packed full of emotion that even thinking about certain scenes, such as Alice’s promotion, is enough to choke a person up.  This is that episode, for anyone curious.

This set, released by Nozomi Entertainment which is the licensing arm of anime retailer The Right Stuf, is very beautiful.  The artbox that was used is a nice, sturdy chipboard box with lovely artwork on it.  The set contains all 13 episodes of Aria the Origination, the 7 episode picture drama (just think of a regular anime with little to no actual animation), and the OAV Aria the Arietta.  It also comes with an episode guide booklet, and a disc with 2 hours of extras containing cast and staff interviews.  There is no dub on it, so everything is in Japanese with English subtitles.

A few random thoughts I had about this set.  First off, I really like how the opening theme song is played as part of the show.  The vast majority of anime just have a set opener with the same animation every time.  Aria has always made it so the opening just starts playing as we’re eased into the show, so in effect the OP animation is different every time.  Secondly, just how freaking old is President Aria?  On Aqua, apparently they have cats that are much more intelligent than Earth cats in that they seem to understand human speech.  Of course, maybe our cats understand us perfectly and just don’t deem us worthy of responding, I don’t know.  Anyways, President Aria is one such cat, but it’s shown that the founder of Aria Company, whom everyone calls Grandma, first came across and befriended President Aria back when she was an undine with another company.  At that time she was probably at most 25, and now appears to be in her 70’s.  So President Aria is at least 50, and still as active and pudgy as he was back then.  I guess Martian cats live a very long time.

All in all, this was a treat to see.  It’s definitely not a show that you’ll want to marathon, since it’s so slow paced.  It’s best to be enjoyed an episode or two at a time, so you have time to properly digest each episode.  Whether you need a pick me up, or just want to relax after a long day, there’s an episode of Aria that can fit the bill at any time.  The great thing about Aria is that other than the last 3 episodes or so, you can really watch it in any order that you wish, and the story being told will make perfect sense.

With my first It Figures column, I talked about one of the more impressive figures in my collection with Godoka.  With this installment, I’d like to talk about what I consider the crown jewel of my collection.  I’m referring to an Azone BJD, or ball jointed doll, of Aria main character Akari Mizunashi.  For those that have followed my posts in the past, you might remember that I listed Aria as an anime you should be watching.  Akari and her boundless enthusiasm and endless amounts of joy at discovering aspects of Neo Venetia is a big reason for that. 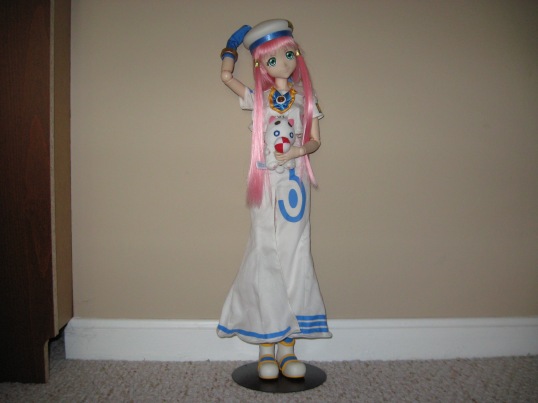 Here is a full view of Akari.  Unlike most standard figures, there are some big differences when you start talking about BJDs.  First off, they’ll almost always have actual cloth clothing.  Second, they’ll have wigs instead of molded plastic hair.  Another thing that makes this figure so special is its size.  It’s a 1:3 scale figure, while most other figures are 1:8 or 1:6.  Even the 1:4 scale figures are not very common, so a 1:3 scale is very much a treat.  The President Aria that she’s holding does not come with the figure, but rather it’s just something I added on separately because it seemed fitting, and for a reason I’ll talk about in a little bit.

Here is a close up of her face.  Azone has a reputation for making good representations of various characters when they give them the BJD treatment, and this is no exception.  Now, there is a difference between this BJD, and say a Volks BJD.  That is this one has painted on eyes, where most Volks dolls have glass eyes inserted into the eye sockets.  While I personally prefer the glass eyes, to some people they can give the dolls a sort of creepy look.  This style is much less creepy and more likely to be pleasing to fans of the series.

This is the main accessory that she comes with, her oar that she uses to row her gondola.  I do not often display her with the oar for a simple reason.  It unbalances her terribly.  That base you see under her feet is all that supports her.  There are a couple weak magnets in her shoes that keep her attached, but with her size, it’s not nearly enough to keep her from tipping over.  The oar itself is a full 40″ long and made of wood, so if its weight shifts even a little, she’ll topple right over.  Perhaps if I had a big enough display case where I could lean the oar against it, I’d use it in the display more often because it is really nice.  As it stands though, it took me 5 minutes of fiddling around just to get her to stand properly while holding that oar for this picture.  Much easier just to display her with President Aria.

As I mentioned, she uses a doll wig instead of molded hair.  Because of this, it takes a little more care to keep it from getting frizzy, but the benefits speak for themselves.  It just cannot be compared to molded plastic hair.  I suppose if one were so inclined, they could do her hair however they wanted.  But, the way it’s meant to be is the best.

They made sure to take into account the layered look of her hair, as it is in the anime.  Of course, her most distinctive feature is, as Akatsuki always puts it, her sideburns.  Akari is always quick to point out that they’re not sideburns, but whatever you want to call them, they’re adorable either way.

Just another view of her, this time from the back.  Her uniform is quite faithfully recreated, with a bit of wire in the hem so even it can be posed in the manner that you choose.  This is a nice touch in case you wanted to pose her in an active type position where it wouldn’t make sense to just have the dress laying flat.

Throughout most of the series, Akari is shown as a Single, which is a level of apprentice gondolier.  This is signified by her wearing one glove.  This is an indication to the public that she cannot take passengers in her gondola without a full fledged gondolier, or Prima.  The glove is able to be removed, so if you so chose, one could display her as a Prima, but I just think the look of a Single suits her more for display purposes. 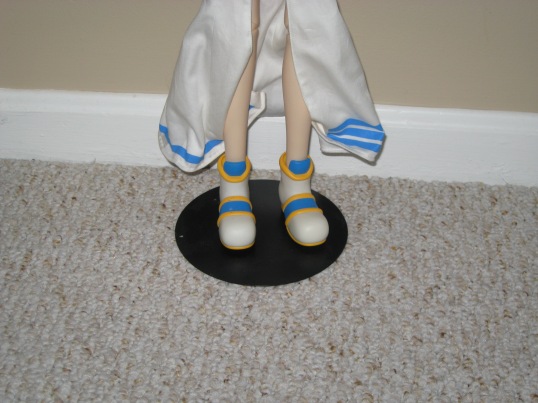 One slight downside to her, besides the lack of really good stability, is the fact that she doesn’t really have ankle joints like a lot of BJDs do.  This is because her boots are not really meant to be removed since that’s how she’s made to stay on her base, and so they felt there was no point in putting on ankle joints.  While I can see their point, it does reduce the ability to pose her a little bit, since she can only bend on her knee joints and just slightly forward on the ankles.  Her feet will shift forward slightly, but not nearly to the extent that a person can bend on their ankles in real life.  Beyond this one little nitpick though, she’s a fantastic figure.

It’s always nice and puts a smile on my face to have Akari welcoming me home with open arms.  Now some might be wondering, what’s she wearing under that uniform?  And to them, I say, none of your business!  Yes, as perverse as I may be most of the time, Aria, and Akari by extension, is serenity.  It’s the one and only show where I will not look for perverse elements, I won’t look at h-doujinshi of it, and I certainly will not look up Akari’s dress at her panties.  She is wearing them, all BJDs tend to have panties and a slip, but I just have no desire to sully her by doing that.  Even I have some semblance of morals now and again!

This figure is certainly not for everyone.  For one thing, the joints tend to turn some people off.  For others, the sheer size of the figure makes it inconvenient to display.  But the main sticking point for people is likely the price.  I was lucky enough to find and purchase her in Japan when I visited there back in 2008, and I got her for the bargain price of 80,000 yen.  At the time, I was getting slightly more than 100 yen per dollar, so she cost me a little less than $800.  That may not seem like a bargain to many, but considering how she now goes at auction for $2500 or more, that is a fantastic price.  I’ve personally been offered $2000 for her, but she is definitely one figure that I will never part with under any circumstances.  She’s just that kind of good.  Some people might look at figures as mere toys, but I think of them as closer to daughters, and I’d never sell my daughters for any price!