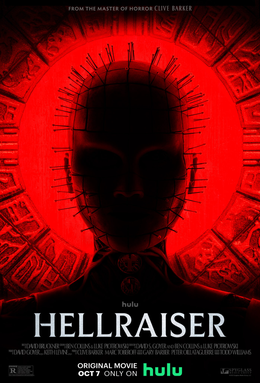 Last night, I started watching the Hellraiser reboot.  I fell asleep about 40 minutes in.

This morning, I finished watching the movie.  Somehow, I did not fall asleep again.

The Hellraiser reboot asks the question: “If Doug Bradley isn’t playing Pinhead, is there any point to watching this crap?”

Based on this movie (and, to be fair, the two previous Hellraisers as well), the answer would appear to be no.  Jamie Clayton takes over the role of Pinhead in the new Hellraiser and the results are a bit underwhelming.

I mean, the Cenobites still look somewhat frightening, don’t get me wrong.  And the puzzle box is a huge part of the reboot’s plot.  And there’s still a lot of blood and a lot of talk about how suffering can be music and a lot of people get ripped apart by magical space chains.  But, with all that in mind, the Cenobites still come across as being kind of boring.  They’ve gone from being frightening creatures beyond imagination to just being generic bad guys.

A big problem is that Jamie Clayton never quite captures the all-encompassing contempt for existence that Doug Bradley brought to the role.  Bradley played Pinhead as a regal sadist, delivering his lines with a withering condescension.  As played by Bradley, Pinhead was really neither good nor evil.  He had transcended such concerns in his search for experience.  Hence, he could get away with announcing that he and the Cenobites were angels to some and demons to others.  In the original Hellraiser, Pinhead (and Bradley) made his first appearance by saying, “You called, we came,” and that pretty much summed up what made the character so frightening.  Bradley’s Pinhead had no concern as to the circumstances that led to him being  called and he certainly had no patience for anyone who thought they could talk their way out of the situation.  Bradley’s Pinhead was beyond such concerns and that made him all the more frightening.

Jamie Clayton’s Pinhead, on the other hand, is smug and not much else.  She’s playing a game with humanity but that leaves her vulnerable to losing.  That’s a mistake that Bradley’s Pinhead would not have made.  (Or, at least, he wouldn’t have made it in the original movie.  The Hellraiser sequels are a different story.)  There’s nothing particularly regal about Clayton’s Pinhead.  She’s just another horror villain.  With her demanding a sacrifice from anyone who cuts themselves on the puzzle box, she’s not that much different from the little girl in Ring.

(In Clayton’s defense, she’s not the first person to replace Doug Bradley as Pinhead.  Bradley also did not appear in the two previous Hellraiser films, Revelations and Judgment.  Bradley felt the scripts were poorly written and, perhaps more to the point, Dimension Films wanted him to take a pay cut.)

As for the reboot itself, it’s about Riley (Odessa A’zion), a recovering drug addict who, along with her boyfriend Trevor (Drew Starkey), steals the puzzle box and then cuts herself on the box which leads to the Cenobites stalking all of her annoying friends.  Riley is an incredibly unlikable character and her friends are kind of whiny so who cares?  Gordan Visnjic plays a decadent businessman who is trying to manipulate the box to his own ends.  Visnjic has a good scene at the start of the film, one that perfectly captures the privileged ennui that would lead to someone getting involved with the Cenobites.  But, eventually, even Visnjic is reduced to being a one-dimensional character.

The main lesson of this Hellraiser film (and the previous two films as well) is that things work better with Doug Bradley than without him.