In Studio 666, the members of Foo Fighters play themselves.  Struggling with writer’s block and hoping to remain musically relevant in a world where the culture belongs to the young, the band heads to an Encino mansion so that they can work on their latest album.  The mansion is infamous because years ago, another band was murdered while attempting to record there.  (Oddly enough, Jenna Ortega plays the drummer of the murdered band.  Ortega had quite a year as far as the horror genre is concerned.)

The band arrives at the mansion and things quickly go downhill.  The band isn’t getting along.  Lead singer Dave Grohl is revealed to be a bit of megalomaniac.  One of the band’s electricians is killed in what appears to be a freak accident.  Most people would move out of a house after someone dies under mysterious circumstances but not this band!  Instead, the band decides to dedicate the album to the memory of the dead guy.

Soon, however, there are a lot more dead people at the mansion.  Why are there so many dead people there?  This is going to sound like a spoiler but it’s not….

DAVE GROHL IS KILLING THEM!

Yes, Dave Grohl has been possessed by the evil spirit of mansion.  On the one hand, it’s given him the inspiration necessary to get over his writer’s block.  On the other hand, it also leads to him killing the other members of the band in various grotesque ways.  Studio 666 is a horror comedy that doesn’t shy away from the gore.  If you’ve ever wanted to see a member of Foo Fighters get cut in half with a chainsaw while having sex with Whitney Cummings, I guess this is the film to track down.  (Cummings, I should note, does not play herself.  This film stars the band as themselves but it’s also filled with recognizable actors who are not playing themselves.)

Studio 666 is a bit of a lark, a horror film starring a band that most people don’t really associate with the horror genre.  Indeed, a good deal of the film’s humor comes from the fact that it’s Dave Grohl doing all of the killing.  In real life, a good deal of Dave Grohl’s appeal is that he comes across as being as close to a regular guy as a rock star can be.  He’s one those famous guys who most people could imagine having a beer with.  Studio 666 gets a lot of mileage out of presenting Dave Grohl as being a pretentious taskmaster who would happily sell his soul for the chance to have a successful solo career.  It helps that Dave Grohl seems to be having a blast playing such an exaggerated version of himself.  It’s hard not to be happy for him because he really does appear to having the time of his life.

That said, once Grohl is revealed to be the killer (and that happens very early in the film so, again, this is not a spoiler), the film really has nowhere else to go.  The whole thing simply becomes Grohl tracking down various members of the band and killing them in grotesque ways and it gets to be a little boring.  There’s little suspense and, since the Foo Fighters are playing themselves, there really aren’t any stakes because we know the band wasn’t actually murdered while recording a new album.  With a 106-minute running time, Studio 666 really grinds its one joke into the ground.

I will say that longtime fans of Foo Fighters will probably enjoy the film, if just because there’s several jokes and comments that are obviously meant to be inside jokes that only a select few will get.  Personally, I think it’s nice that the band did something for the fans, even if the movie itself doesn’t really work. 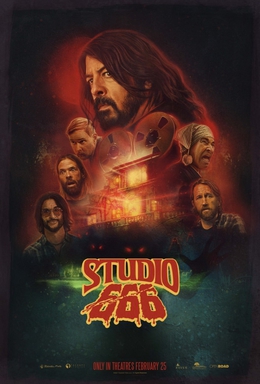