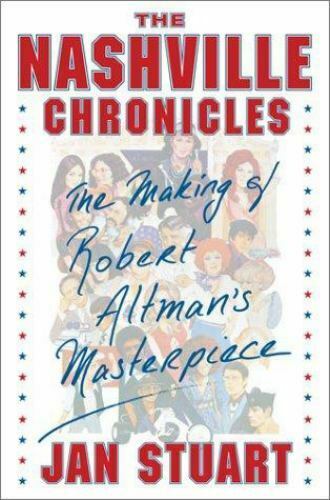 First published in 2000, Jan Stuart’s The Nashville Chronicles is a look at both the making and the legacy of one of the best films of the 70s, Robert Altman’s Nashville.

Starting with Joan Tewksbury’s fateful journey to Nashville to search for ideas for a screenplay for a film that Robert Altman wanted to make about the capitol of country music and ending with the details of a mercifully unrealized sequel, The Nashville Chronicles details just about everything one could want to know about the making of Altman’s film and it does so in an always entertaining fashion.  Jan Stuart’s love of the film is obvious but so is Stuart’s understanding of the film’s satirical take on politics, celebrity, and Americana.

Much like Altman’s film, Stuart’s book is free-wheeling look at a period of American culture, featuring a large and disparate group of characters. Stuart focuses on the collaborative nature of the film, emphasizing that the actors often brought their own ideas and, in some cases, issues to project.  Stuart interviewed almost every member of the cast who was still alive in 2000.  (The only person he couldn’t track down was Dave Peel, who played Bud Hamilton.)  The actors prove to be as interesting as the characters that they played and Stuart does a wonderful job of capturing not only their quirks but also how their own lives often informed their performances.  Ned Beatty emerges as a plain-spoken but intelligent artist while Henry Gibson is as droll as the character he played was calculating.  Keith Carradine talks about how his dislike of the character he was playing actually made his performance more effective.  Karen Black is wonderfully eccentric while Geraldine Chaplin provides an outsider’s view to the uniquely American experience of Nashville, both as a town and a movie.  The enigmatic Michael Murphy expertly straddles the line between the establishment and the counterculture while Thomas Hal Phillips predicts the next 50 years of American political history with the speeches that he wrote for the often heard but always unseen presidential candidate, Hal Phillip Walker.  And, throughout it all, Robert Altman oversees the production, a talented but mercurial director who could be both amazingly supportive and amazingly cold whenever he felt slighted.  Altman emerges as a genius who could be shockingly petty to those who he felt had disappointed him.

The book covers the filming of all the major moments from the film, including the prophetic finale.  The book also explores a proposed Nashville sequel, which would have featured all of the surviving characters ten years after the first film.  Haven Hamilton, for instance, would have followed in Hal Philip Walker’s political footsteps.  Reading about the proposed outline for the sequel, it’s hard not to feel that it’s a good thing that it never moved beyond the idea stage.  As Stuart’s book makes clear, Nashville was a once-in-a-moment success and not something that could be easily duplicated.  Nashville ended with one tragedy, one surprising act of heroism, and the birth of a new star.  It was the perfect ending and any attempt to continue the story would have just cheapened it.

One response to “Non Fiction Book Review: The Nashville Chronicles by Jan Stuart”