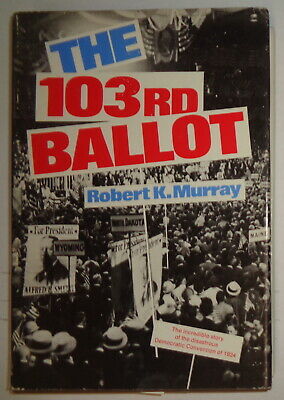 Cinematically, the 1968 Democrat Convention has been done to death.

There have been a lot of movies made about the 1968 Democrat Convention and certainly, I can understand why.  Not only did you have an epic battle taking place in the Convention Hall between the Democrat establishment and the reformers but there were also riots in the streets.  The police were beating up protestors and slogans were being chanted and Haskell Wexler was filming footage for Medium Cool.  Yes, it was all very cinematic but again, it’s just been done to death.  We don’t need another movie about what happened in 1968.

Instead, what is needed is a movie about the 1924 Democrat Convention, which was held in Madison Square Garden and which lasted for two and a half weeks because none of the men running for President could get enough votes.  The two major candidates were Al Smith of New York and William McAdoo of California.  Smith was an anti-prohibitionist and was seeking to become the first Catholic to be nominated by a major political party.  McAdoo was the son-in-law of America’s greatest monster, Woodrow Wilson.  Smith’s campaign was managed by a young Franklin D. Roosevelt, who was making a political comeback after being previously struck down by polio.  Though he was not himself a member and had no use for the organization, McAdoo found himslef being supported by the Ku Klux Klan, who was then at the height of its political influence and which opposed Smith because of his Catholicism.

With neither Smith nor McAdoo able to command a majority of the delegates, other “favorite son” candidates emerged.  U.S. Sen. Oscar Underwood of Alabama, a longtime opponent of Klan, was not only nominated but also fought a heroic but losing battle to insert a plank condemning the Klan into the Democrat platform.  West Virginia’s John W. Davis was nominated, as was Kansas’s Jonathan M. Davis.  Meanwhile, in the wings, William Jennings Bryan managed the presidential campaign of his brother, Charles, and waited to see if the Convention would perhaps turn to him and put him on the national ticket for a record fourth time.  (Little did Bryan know, of course, that the Scopes Monkey Trial was waiting for him, right around the corner….)

In the end, 58 men received votes for the presidential nomination at the 1924 Democrat Convention.  It took a record 103 ballots for the party to finally nominate a candidate who, after all of that, would still have to run against the enormously popular incumbent, Calvin Coolidge.  Along the way, there were fist fights, political chicanery,  and many accusations of lies, bad faith, and prejudice.  FDR re-launcher his career with his pro-Smith speech but, in doing so, he also inspired the jealousy that would lead to Al Smith becoming one of the leading opponents of the New Deal.  Meanwhile, the aging William Jennings Bryan struggled to control a party that no longer had much use for him.

It’s a fascinating story, and one that I know about because I read a book called The 103rd Ballot, which tells the story of not only the convention but also the election that followed it.  The book was written by Robert K. Murray and it was originally published in 1976.  It’s been around for a while but the issues that it deals with and the politicians that are profiled all feel very familiar.  Today, control of the major political parties is still being fought over by the activist who do the work and the politicians who reap the rewards.  Extremism is still a threat.  Just as the Democrats did in 1924, Americans are still trying to figure out what the country’s role in the world should be.  As described by Robert K. Murray, historic figures like FDR, Al Smith, McAdoo, Calving Coolidge, and John W. Davis all come to life.  Their motivations are often petty but their actions change the course of history.

The next presidential election is going to be the 100-year anniversary of the 1924 debacle and the issues that made that convention so chaotic are the same issues that political types are still dealing with today.  In 1924, America was recovering for a war and a pandemic.  In 2024 …. well, you get the idea.  The main difference, of course, is that we now have air conditioning.  At the 1924 convention, air conditioning was still a relatively new concept and the delegates spent two and a half-weeks jammed into Madison Square Garden in the summer.  Agck!

So, seriously, some aspiring Aaron Sorkin (though not Sorkin himself, that’s the last thing we need) needs to buy the rights to this book and get to work on a movie or a miniseries about what happened in 1924.  I can’t wait to see who plays Al Smith!

One response to “Book Review: The 103rd Ballot by Robert K. Murray”