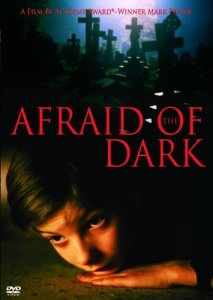 Lucas (Ben Keyworth) is an 11-year-old boy who lives in London and who enjoys watching the neighborhood through his telescope.  Because Lucas’s mother is blind, Lucas is concerned that there is a serial killer who is going around and attacking blind women.  Lucas is determined to help his father (James Fox), an inspector with Scotland Yard, capture the killer.  Lucas starts to sneak out of the house, visiting cemeteries and spying on the same blind women that the killer is stalking.  Investigating on his own, Lucas discovers who the killer might be.

Outside of the imaginary world where he spends most of his time, Lucas is a shy boy and his father is not a detective but instead a florist.  While Lucas’s mother actually is blind, Lucas himself is starting to lose his eyesight as well.  Lucas is scheduled to undergo an experimental surgery.  He’s due to go under the knife, just as surely as the victims of the serial killer that he thinks he’s hunting.  Meanwhile, his mother is pregnant and the increasingly unstable Lucas is both obsessed with his older stepsister and jealous of all the attention that his new baby sister is already getting.

Afraid of the Dark is a British psychological thriller that deserves to be better known.  Intelligently written and directed Mark Peploe, it’s both a poignant and a frightening look at a child who, due to being forced to deal with something that few others can understand, has retreated so far into his own imaginary world (where he can be the hero) that he can no longer tell what is real and what isn’t.  Lucas is both frightening and sympathetic and the movie will keep viewers guessing as to what is real and what isn’t.  James Fox and Fanny Ardant are perfectly cast as Lucas’s parents and David Thewlis, Paul McGann, and Robert Stephens all make an impression as the men who Lucas investigates in his search for the serial killer.  Tense, intelligent, and surprising, Afraid of the Dark is a film that is worth discovering.

One response to “Afraid of the Dark (1991, directed by Mark Peploe)”