Rope, an odd little 1948 experiment from Alfred Hitchcock, opens with a murder.

Two wealthy young men, Brandon (John Dall) and Philip (Farley Granger), invite their friend, David Kentley (Dick Hogan), up to their apartment.  When David arrives, they strangle him and hide his body in a wooden chest.  As quickly becomes obvious, Brandon and Philip killed David largely to see if they could pull off the perfect murder.  Brandon is sure that they did and, that by doing so, they proved the concept of Nietzsche’s Übermensch,  The alcoholic Philip is less sure and starts drinking.

Brandon and Philip don’t just have murder planned for the day.  They’re also planning on throwing a little dinner party and, among those on the guest list, are David’s parents, his girlfriend, and his girlfriend’s former boyfriend.  Also attending will be Brandon and Philip’s former teacher and housemaster, Rupert Cadell (James Stewart).  In fact, Brandon regularly claims that he got the idea to commit the perfect murder as a result of discussing philosophy with Rupert.  Apparently, Rupert turned Brandon onto Nietzsche….

Well, fortunately, the dinner party conversations reveals that Brandon and Philip misunderstood what Rupert was trying to tell them.  They assumed, using the same type of logic that currently fuels most debate today, that just because Rupert mentioned something that meant that he approved of it.  As it becomes clear that Rupert would not approve of what his students have done and as Rupert himself starts to suspect that something bad has happened at the apartment, Brandon and Philip start to plot against their former mentor….

Now, it can be argued that Rope is not a horror movie.  And indeed, if your definition of horror is ghosts, vampires, werewolves, or any other type of paranormal creature than yes, Rope has none of those.  Instead, the horror of Rope is the horror of human cruelty.  It’s the horror of two privileged young men who have so twisted the words of their mentor that they’ve become monsters.  The horror in Rope comes from the fact that, in 1948, Brandon and Philip have embraced the same philosophy that, only a few years earlier, had plunged the entire world into war.  While families mourned their dead and Europe struggled to rebuild, Brandon and Philip showed that they had no understanding of or concern for the trauma that humanity had just suffered.  And making it even more disturbing is that they found the justification for their crimes in the lessons taught by the epitome of American decency, Jimmy Stewart.  The idea of that is more terrifying than any Hammer vampire flick.

Of course, Rope is best known for being a bit of an experiment.  Hitchcock edited the film to make it appear as if it was all shot in one take and events, therefore, played out in real time.  It’s an interesting idea and, as always, you have to admire Hitchcock’s ingenuity and, even in a film as grim as this one, his playfulness.  At the same time, Hitchcock’s technique makes an already stagey story feel even stagier.  Some of the actors — like James Stewart, John Dall, and Cedric Hardwicke in the role of David’s father — are able to give naturalistic and convincing performances despite the staginess of the material. Others, like poor Farley Granger, find themselves overshadowed by the film’s one-shot gimmick.

Rope is an experiment that doesn’t quite work but flawed Hitchcock is still a pleasure to watch.  The final few minutes, with Stewart and Dall finally confronting each other, are among the best that Hitchcock ever put together.  I appreciate Rope, even if it doesn’t quite succeed. 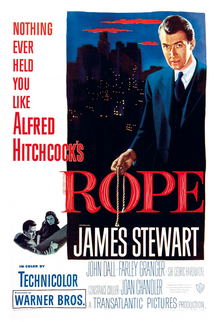