The Trial of the Chicago 7, the latest film from Aaron Sorkin, is a fairly mediocre and rather forgettable film.  Because of that mediocrity, it stands a pretty good chance of doing very well at the Oscars later this year.

Aaron Sorkin specializes in political fan fiction.  He writes plays, movies and television shows that address big and controversial issues in the most safely liberal way possible.  Whenever Sorkin writes about politics, there’s not a single debate that can’t be won by one long, overdramatic speech, preferably delivered in an office or a conference room while everyone who disagrees nervously stares at the ground, aware that they’ll never be able to match the rhetorical brilliance of their opponents.  It’s a rather dishonest way to portray the ideological divide but it’s one that’s beloved by people who want to be political without actually having to do much thinking.  Sorkin is the poet laureate of the keyboard activists, the people who brag about how their cleverly-worded tweets “totally owned the MyPillow guy.”  (One sure sign of a keyboard activist is the excessive pride over rhetorically owning people who are ludicrously easy to own.  These are the people who think that Tom Arnold arguing about the electoral college with Kirstie Alley is the modern-day equivalent of the Lincoln/Douglas debates.)

The Trial of the Chicago 7, which Sorkin not only wrote but also directed, deals with a real-life event, the 1969 trial of eight political activists who were charged with conspiracy and crossing state lines with the intention of inciting riots at the 1968 Democratic National Convention in Chicago.  (Black Panther Bobby Seale was ultimately tried separately from the other defendants, leading to the Chicago 8 becoming the Chicago 7.)  Sacha Baron Cohen plays Abbie Hoffman, the fun-loving activist who delights in upsetting the establishment.  Eddie Redmayne played Tom Hayden, who takes himself and his activism very seriously and who worries that Hoffman’s antics in the courtroom are going to discredit progressives for generations to come.  Hoffman ridicules Hayden for being a rich boy who is rebelling against his father.  Hayden attacks Hoffman for not thinking about how his actions are going to be perceived by the rest of America.  Sorkin the screenwriter is clearly on Hayden’s side while Sorkin the director keeps finding himself drawn to Hoffman, if just because Hoffman is the more entertaining character.  Hoffman gets to make jokes while Hayden has to spend the entire film with a somewhat constipated expression on his face.

As is typical of Sorkin’s political work, the film raises issues without really exploring them.  We learn that the defendants were all arrested during anti-war protests but the film never really explores why they’re against the war.  It’s mentioned that David Dellinger (John Carroll Lynch) is a pacifist who even refused to fight in World War II but at no point do we learn what led to him becoming a pacifist.  When Hoffman and Jerry Rubin (Jeremy Strong) talk about how they feel that the government holds people like them in contempt and that they shouldn’t have to fight in a war that they don’t believe in, Sorkin’s script has them speak in the type of simplistic platitudes that could just as easily have been uttered by a MAGA supporter talking about the war in Afghanistan.  If all you knew about these men was what you learned in this film, you would never know that Hayden, Hoffman, and the rest of the Chicago 7 were activists both before and after the Vietnam War.  You’d never know that there was more to their ideology than just opposition to the Vietnam War.  The film never really digs into anyone’s beliefs and motivations.  Instead, everyone might as well just have “Good” or “Evil” stamped on their forehead.

Sorkin’s simplistic approach is most obvious when it comes to Bobby Seale (Yahya Abdul-Mateen II).  With Seale, the film is more interested in how other react to him than in the man himself or his activism.  The film’s most shocking moment — when Judge Hoffman (Frank Langella) orders Seale to be literally bound and gagged in the courtroom — actually did happen but the film mostly seems to use it as an opportunity to show that even the lead prosecutor (played by Joseph Gordon-Levitt) is disgusted by the government’s heavy-handedness.  Seale and the Black Panthers are used more as symbols than as actual characters.

Since this is an Aaron Sorkin film, the action is male-dominated.  It’s justified as the Chicago 7 and their lawyers were all men. Still, it’s hard not to notice that the only prominent female characters are an undercover cop who betrays the protestors and a receptionist who is frequently reprimanded by the men in the film.  One black woman in a maid’s uniform does get a chance to reprimand Hayden for not speaking out when Bobby Seale was gagged but she’s never even given a name.  As often happens with women of color in films like this, she’s only there to remind the white heroes to do the right thing.

Watching The Trial of the Chicago 7, I found myself thinking about how lucky Aaron Sorkin was to get David Fincher as the director of The Social Network.  A smart director with a strong and unique style, Fincher was able to temper Sorkin’s tendency toward pompousness.  Unfortunately, as a director, Aaron Sorkin is no David Fincher.  While Sorkin has definitely established his own style as a writer, he directs like someone who learned how to stage a crowd-pleasing moment from watching Spielberg but who, at the same time, never noticed the sense of playfulness that Spielberg, especially early in his career, infused within the best of those scenes.  It’s all soaring rhetoric and dramatic reaction shots and cues to let us know when we’re supposed to applaud.  As a director, Sorkin never challenges the audience or lets the film truly come to any sort of spontaneous life.  Instead, he adopts a somewhat cumbersome flashback-laden approach.  The story never quite comes alive in the way that the similar courtroom drama Mangrove did.  It’s all very safe, which is one reason why I imagine The Trial of the Chicago 7 is as popular as it is.  It’s a film that allows the viewers to celebrate the fantasy of activism without having to deal with the messy reality of all the complications that come along with taking an actual stand.  It’s a film that encourages you to pat yourself on the back for simply having watched and agreeing that people have the right to protest.

I will say that Sorkin made some good casting choices.  Langella is memorably nasty of the judge and Joseph Gordon-Levitt does a good job as the prosecutor.  Eddie Redmaye is a bit of a drag as Tom Hayden but Alex Sharp is likable as Hayden’s friend, Rennie Davis.  Michael Keaton has an effective cameo as Ramsey Clark.  The film presents Clark as being a bit of a wise liberal and the film’s epilogue doesn’t mention that Clark went on to a lucrative career of providing legal aide to murderous dictators and anti-Semites.  (Lyndon LaRouche was one prominent Ramsey Clark client.)

The Trial of the Chicago 7 will probably do well come Oscar-time.  In many ways, it almost feels like a generic Oscar movie.  It’s about a historical event, it’s political without being radical, and it presents itself as being far more thoughtful than it actually is.  That’s been a winning combo for many films over the years. 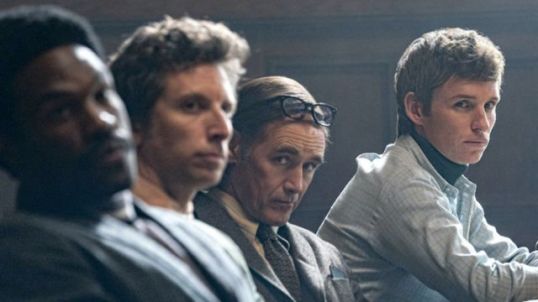