Dream World was a magazine that existed, briefly, in 1957.  Each issue dealt with stories of men who had “incredible powers.”  Judging from the covers of Dream World, the only possible use for any of those powers was to either get laid or get rich.  Apparently, readers in 1957 didn’t feel that they needed special psychic powers to do either of those because Dream World only lasted for three issues.  Here are the three covers of Dream World:

This first issue is from February of 1957 and it features a cover by Ed Valigursky.  According to the cover, it featured a story called “Ways to Get A Gal.”  Apparently, in 1957, it helped if you had x-ray vision.  Then you could spend all day staring through a brick wall and seeing what books she had sitting on her book shelf.  I’m sure that’s what the man on the cover is focusing on, right?

This second issue is from May of 1957.  According to the cover, this issue featured a man who could make his dreams come true and apparently, he’s been dreaming about a startlet with sharp eyebrows and bountiful cleavage.  This issue also featured something called “You Too Can Win A Harem.”  Hopefully, this was a story and not an actual contest. 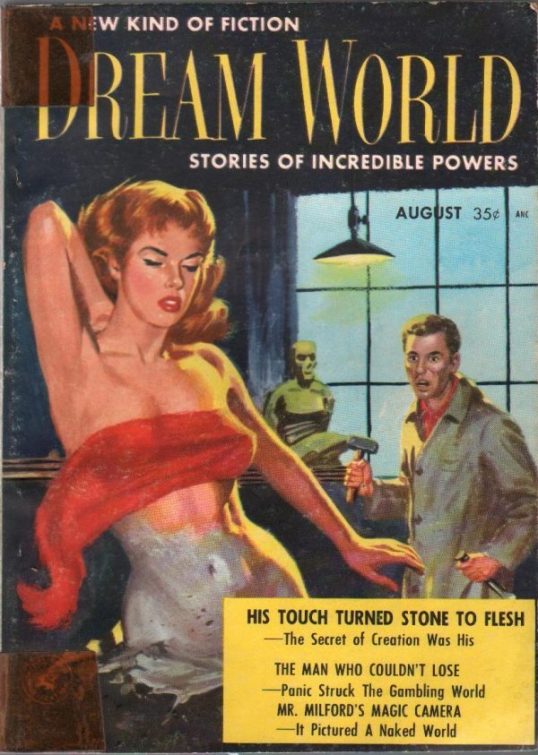 The third and final issue came out in August of 1957 and featured a cover by Ed Valigursky.  This one featured a story about a man whose touch turned stone to flesh, which I guess is what’s happening on the cover.  It also features a story about Mr. Milford’s Magic Camera, which took naked pictures in the days before mirror selfies.

There would be no more issues of Dream World after this but a good cover, like a dream, never truly dies.

One response to “The Three Covers of Dream World”