Yes, this movie came out in 1969 and it’s one of those late 60s, counter culture films that’s so intent on impressing you by being daring that it doesn’t bother to actually come up with an interesting story or anything like that.  It’s a film that talks a lot but has nothing to say.  It’s a film that’s obviously meant to be very counter cultural and left-wing but it has a streak of such cruel misogyny running through it that it’s nearly impossible to watch certain scenes.

Singer Holly Near stars as Tara Steele, the teenage daughter of two wealthy parents.  Tara’s mother (Jennifer Jones) is a former actress who brags about having starred in over a hundred stag film without ever “faking an orgasm.”  Tara’s father (Charles Aidman) is a former military man who knew Douglas MacArthur and who is gay but closeted.  (The film handles the issue of his sexuality with all of the sensitivity that you would expect from an episode of the 700 Club.)  Tara is insecure because she’s overweight and her family doesn’t show her any love.  The film, it should be said, doesn’t really show her any love either.  Whether its the close-ups of her messily eating with food smeared across her face or the scenes in which other characters casually insult her, the film seems to have little sympathy for her.

Tara meets a rock singer named …. seriously, this is his fucking name …. Bogart Peter Stuyvesant (Jordan Christopher).  With his tight leather pants and his shirtless performances, Bogie (yes, he’s called Bogie) is supposed to be a Jim Morrison-style sex symbol.  Unfortunately, Jordan Christopher doesn’t have enough screen presence to pull off the role.  Bogie pretends to be in love with Tara (“Your breath stinks!” he shouts, “I dig it!”) but it’s just so he can seduce her mother and her father and make off with all of their money.  It’s supposed to have something to do with the hypocrisy of the American establishment or something but …. oh, who cares?

So, this movie is annoying for any number of reasons.  Robert Thom directs as if he was getting paid extra for every time he used a zoom lens or tossed in a jump cut.  Yet, despite all of the camera trickery, the story drags like you wouldn’t believe.  The walls of Jordan’s pad are decorated with a collage of American icons like Humphrey Bogart and Dwight Eisenhower and Thom often pointlessly zooms into the collage whenever he thinks it will help him make his point but since the film doesn’t really seem to have a point, the collage itself gets as boring as Bogie playing a harp.  Yes, Bogie does play a harp.  It goes over forever.

As I watched the film, I found myself growing more and more pissed off.  Every pretentious line of dialogue and arty camera angle just made me angrier and angrier.  Didn’t Jennifer Jones and Holly Near deserve better than this?  Who the Hell decided to cast bland, doughy Jordan Christopher as a sex symbol?  WHY WAS RODDY MCDOWALL IN THIS MOVIE!?  WHY CAST RODDY MCDOWALL AND THEN NOT HAVE HIM DO ANYTHING!?  Why did every scene have to drag on?  Why couldn’t the film just get to the freaking point!?  WHY WERE THEY SKY DIVING!?  WHY DID WE HAVE TO SIT THROUGH FIVE SONGS FROM JORDAN CHRISTOPHER!?  WHY?  WHY?  WHY!?

Anyway, I don’t really recommend this one. 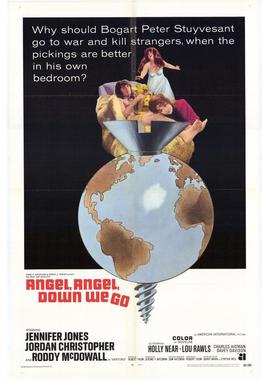 2 responses to “Film Review: Angel, Angel, Down We Go (dir by Robert Thom)”