The 2017 film, Crown Heights, tells the story of two friends and a miscarriage of justice.

In 1980, a 19 year-old Trinidadian named Colin Warner (Lakeith Stanfield) is arrested in the Crown Heights neighborhood of Brooklyn.  Taken down to the police station, Colin is told that he has been arrested for the murder of Marvin Grant, a man who he has never heard of.  When Colin says that he is innocencent, he’s informed that eyewitnesses saw him at the scene of the crime.  Though he continues to protest his innocence, Colin is transferred to a jail where he is to await his trial.

From the start, it’s obvious that Colin didn’t have anything to do with the shooting of Marvin Grant.  What’s messed up is that the people prosecuting him know it as well.  When another prisoner tell the detectives the name of the man who actually committed the murder, his statement is ignored because he refuses to name his source.  When one of the prosecution’s witnesses testifies that he saw someone other than Colin fire the gun, the prosecutor “corrects” his witnesses’s testimony in open court. After the jury returns a guilty of verdict for Colin and another man, the judge says that he can’t be sure whether or not Colin is guilty but that he can only follow the law.  And the law says that, as an adult convicted of a crime, Colin is going to spend the rest of his life in prison.  No one in the legal establishment cares that Colin is obviously not guilty.  He’s a young black man with a minor criminal history and, by convicting him, the police can close one homicide investigation and move on to the next one.

In prison, Colin finds himself isolated, both literally and figuratively.  When he refuses to get involved with any of the prison gangs, the other prisoners shun him and he finds himself being targeted.  When a prison guard pushes Colin until Colin finally snaps and throws a punch, Colin ends up spending two years in solitary confinement.

Meanwhile, on the outside, Colin’s best friend, Carl King (Nnamdi Asomugha), attempts to prove that his friend is innocent.  That proves to be even more difficult than Carl initially expects.  No one is interested in reopening a closed case and Carl can’t even afford a good attorney to help him pursue Colin’s appeal.  Still, Carl never gives up.  He even trains to become a process server so that he can have an excuse to hang out at the court house and hopefully meet a lawyer who will be willing to take on Colin’s case.  Amazingly, that’s exactly what happens.

Of course, by this point, Colin Warner has been in prison for 20 years….

Based on a true story, Crown Heights was a hit at the 2017 Sundance Film Festival, winning the Audience Award for the U.S. Dramatic Film competition.  Watching the film, you can easily see why it was such a crowd pleaser.  Not only does the film deal with serious issues of race and economic disparity but, when watching the film, it’s impossible not to be moved by the strength of Carl and Colin’s friendship.  Despite all of the difficulties that are placed in front of him, Carl never gives up in his quest to prove Colin’s innocence and get him out of prison.  The film works as both a cry for freedom and a celebration of friendship.

The film’s execution is not quite as strong as its message.  Matt Ruskin’s direction occasionally veer towards made-for-TV (or, at the very least, made-for-HBO) territory and the film’s constant switching back and forth between Colin in prison and Carl searching for witnesses sometimes seems to prevent either storyline for really maintaining a consistent momentum.  20 years is a long time to cover in just 90 minutes and sometimes, it’s hard not to feel as if important parts of the story have been left out or, at the very least, glossed over.  That said, it’s a heartfelt film and it’s blessed with two wonderful lead performances from Lakeith Stanfield and Nnamdi Asomugha.

Crown Heights is not a perfect film but the story and the performances are powerful enough to make you think and to leave you moved. 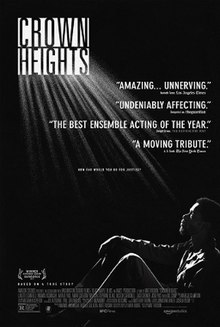 One response to “Ghosts of Sundance Past #3: Crown Heights (dir by Matt Ruskin)”