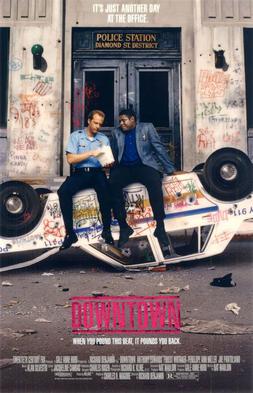 Alex (Anthony Edwards) is a patrolman assigned to the nicest neighborhood in Philadelphia but, after he gets in trouble for pulling over a wealthy businessman (David Clennon), he is told that he can either be suspended or he can take a transfer downtown, to the Diamond Street precinct.  Alex takes the transfer, even though everyone on the force says that “not even the Terminator would go to Diamond Street.”  Alex gets assigned to work with seasoned Sgt. Dennis Curren (Forest Whitaker), who is still emotionally scarred by the death of his former partner and does not want to have to babysit a naive white cop from the suburbs, especially one who is obsessed with the Beach Boys.  At first, Alex struggles with his new assignment and his new partner but, when an old friend is murdered by a notorious hitman (Joe Pantoliano), Alex is determined to crack the case and bring the killer to justice.

Downtown is a combination of other, better cop films: Alex’s situation is Beverly Hills Cop in reverse and his partnership with Dennis is lifted straight from Lethal Weapon.  Art Evans is the captain who is always yelling at Alex and Dennis and telling them to drop the case and the character is so familiar that I had to check to make sure that Evans had not played the same role in Lethal Weapon.  As the bad guys, Clennon and Pantoliano could just have easily been replaced by Beverly Hills Cop‘s Steven Berkoff and Jonathan Banks and no one would have noticed.  The only real difference is that Downtown is neither as exciting nor as funny as those two films.  Downtown was directed by Richard Benjamin, who will never be known as a particularly versatile filmmaker and who struggles to balance the fish-out-of-water comedy with some surprisingly brutal violence.  Beverly Hills Cops had Eddie Murphy and Lethal Weapon had Mel Gibson and Danny Glover.  Downtown has Anthony Edwards and Forest Whitaker, who are both good actors but who both seem to be woefully miscast here.  (If Downtown were made today, Whitaker could play Dennis but, in 1990, he was too young to be the cop who was “too old for this shit.”)    Of the many Lethal Weapon ripoffs that came out in late 80s and early 90s, Downtown is one of the most forgettable.