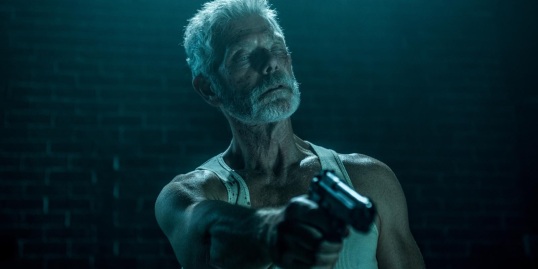 I’m currently on vacation but don’t worry!  I would never let a little thing like taking some time off get in the way of reviewing movies here on the Shattered Lens.  (Especially not when we’re in the middle of our annual Horrorthon!)

Before we left Dallas, Jeff and I finally saw Don’t Breathe.  It’s hard for me to explain why it took me so long to see Don’t Breathe.  Ever since I first saw the trailer this summer, I had been excited about eventually getting to watch it.  When the first few positive reviews started to come in, I got even more excited.  Everything I heard about Don’t Breathe made it sound like this was a film that was specifically made for enjoyment.

But then the film was actually released and it was just so damn popular.  It was number one at the box office.  It got great word of mouth.  People on twitter wouldn’t shut up about how scary it was and how much they loved it.  While I realize that this actually says a lot more about me than it does about the state of current American cinema, there was a part of me that started to think, “How good could it be if everyone else loves it?”  Traditionally, the best horror films have always struggled to find an audience.  Whenever the majority automatically embraces any work of art, that’s usually not a good sign.

And so, I put off seeing Don’t Breathe.  I decided to wait until it was a little less popular.  I didn’t want to have to watch this film surrounded by a bunch of people who didn’t know names like Argento, Fulci, and Rollin so I waited until the showings would be a little less packed.  Finally, last Tuesday, I saw Don’t Breathe.

Seriously — what was I thinking waiting so long?

Like almost all recent independent horror films, Don’t Breathe takes place in Detroit and the first few minutes of the film are dedicated to giving us a tour of a city in decline.  As we stare at the collapsing buildings, the potholed streets, and the desolate lots of overgrown weeds, we’re forced to consider whether any cinematic horrors could possibly match the horrors of real life.

Those establishing shots of Detroit are important for another reason.  They also provide all the motivation that our three protagonists need.  All we have to do is look at the landscape and we understand why they’re so desperate to find something better in life.  (And, of course, you can’t find something better unless you have the money to look…)  Rocky (Jane Levy), Alex (Dylan Minnette), and Money (Daniel Zovatto) make their living breaking into houses and selling what they steal.  Money is their leader.  Alex’s father owns a home security company, which gives Alex access to everyone’s security code.  (Of course, Alex’s main motivation is that he’s in love with Rocky.)  As for Rocky, she’s just trying to raise enough money so that she and her younger sister can escape to California.

Money is given a tip about a blind army veteran (Stephan Lang) who apparently has $30,000 stored in his home.  (He won the money in a court settlement after his daughter was killed by a rich girl who was driving drunk.)  The veteran is the last remaining resident of an otherwise deserted neighborhood.  He spends all of his time in his large but dilapidated house, apparently living with only a viscous guard dog.  Money figures that all they have to do is drug the dog and then they can break into the house and steal everything that they need.  Money assures the hesitant Alex that it’ll be easy because the man’s blind and he really doesn’t need the cash anyway.

Of course, it doesn’t quite work out like that.  The three of them get into the house pretty easily but getting out proves to be much more difficult.  And when the man wakes up and hears his house being broken into, he turns out to be far more formidable and much more dangerous than any of them thought.

About halfway through Don’t Breathe, there’s a big twist that I didn’t care much for.  As played by Stephen Lang, the blind man was already intimidating enough without turning him into a Saw-style super villain.  But, even with that in mind, Don’t Breathe works.  It’s a relentless and well-directed thrill ride, with the camera freely roaming through that deserted house and the cast all giving good and believable performances.

Ultimately, the film is dominated by Stephen Lang.  Lang is one of those good actors who never seems to get the roles that he deserves.  (He was in Avatar but, in that film, he was 1) saddled with a bad accent, 2) had to recite some of the most melodramatic dialogue ever written, and 3) was stuck playing a character who was so thinly drawn that it’s a stretch to say he was even one-dimensional.)  When you first see the man, your natural instinct is to feel sorry for him.  He’s blind, he’s got a tragic backstory, and now he’s got three people trying to rob him.  That’s why it’s such a shock when you first discover just how dangerous and evil he actually is.  Lang transforms the man into one of the most memorable monsters of this very monstrous year.

So, if you haven’t seen Don’t Breathe, go see it.  Don’t let the fact that its popular scare you off.