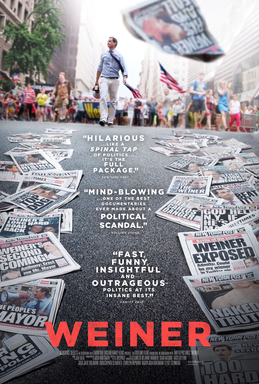 I know it may seem strange for me, the girl who launches into at least one “I’m sick of hearing about politics” rant a day, to watch Weiner but this documentary has been getting considerable acclaim.  In a year when very few Oscar contenders have yet to emerge, Weiner has already been declared by many to the be the front-runner for this year’s Oscar for Best Documentary Feature Film.  So, really — what choice did I have but to watch?

Then again, even if it wasn’t a potential Oscar contender, I would probably still want to watch Weiner.  Anthony Weiner’s story is a fascinatingly awful one and how people react to it seems to largely depend on whether they lean to the right or to the left.  To those on the left, Anthony Weiner is almost a tragic figure, a forceful advocate who was undone by his personal weaknesses.  To those on the right, Weiner is a symbol of liberal hypocrisy.  And, for those in the apathetic middle (like me), he’s a creepy and somewhat pathetic perv who used to serve in Congress and who is now lucky if he can get a cameo in a Sharknado sequel.

Of course, when it comes to Anthony Weiner, the thing that we can all agree on is that, regardless of what happened, it was all his fault.  Weiner opens with a montage of Antony Weiner’s rise and fall.  We see him screaming on the house floor and taunting Republicans on a news program.  We then see him being asked if he posted a picture of his “bulge” on twitter.  We watch as Weiner denies posting the picture and then admits to posting the picture.  Weiner says he will never resign from Congress.  Obama pops up for a second to tell an interviewer that he thinks Weiner should resign.  And then, Weiner does resign.

The documentary picks up two years later.  Anthony Weiner is running for Mayor of New York and, despite lingering questions about his online activities, Weiner has emerged as the front runner.  In fact, Weiner is so confident that he’s going to win the Democratic nomination that he even invites a documentary film crew to follow him during the campaign.  It’s obvious that, initially, both Weiner and the documentarian believe that this documentary is going to be a story of redemption.

And so, we follow Weiner as he campaigns.  We see his enthusiastic volunteers, all talking about why they want Anthony Weiner to be the next mayor of New York.  We meet Weiner’s wife, Huma Abedin, and we listen as people gush about how close she is to Hillary Clinton.  Everything seems to be perfect…

…And then, suddenly, things change.  It turns out that Weiner has not stopped his online activities.  Instead, it appears that he’s become even more reckless than before.  The press discovers that Weiner’s online name was “Carlos Danger.”  One of Weiner’s sexting partners, Sydney Leathers, emerges as a celebrity.  Thought Huma stands with her husband in public, the documentary cameras catch her in private, often sitting alone and looking like she can’t believe that, out of all the available men in D.C., she ended up married to someone who thought Carlos Danger sounded like a plausible name.

And through it all, Anthony Weiner seems blissfully unaware.  He continues to campaign for mayor and cannot seem to understand why people keep asking him about the scandal.  He gets angry.  He snaps at hecklers.  Suddenly, nobody is returning his phone calls.  Nobody is taking him seriously as a candidate.  And yet, Weiner still seems to be convinced that he’s going to win.  One of the documentary’s best scenes takes place on election night, when Weiner watches the results and realizes that, in a matter of days, he’s gone from being the front runner to coming in dead last.  Making matters even worse, of course, is that both the press and Sydney Leathers have gathered outside of Weiner’s campaign headquarters, waiting for him and Huma to emerge so that they can literally pounce on them.

It makes for a fascinating documentary, though perhaps not in the way that the documentarians originally intended.  As much as the film attempts to paint Weiner as being a tragic character, a talented man brought down by his own mistakes, the real Anthony Weiner comes across as being a shallow narcissist who, through a combination of arrogance and stupidity, actually thought it would be a good idea to have a documentary crew follow him around despite knowing that there was a potential scandal hanging over his head.  It makes for a memorable portrait of what happens with ambition meets compulsion.

The film’s getting a lot attention because it provides a behind-the-scenes look at Huma Abedin.  With Hillary Clinton pretty much guaranteed to be our next President, Huma is also guaranteed to soon become one of the most powerful people in the country.  Unlike Weiner, who sometimes comes across as being almost compulsive in his need to be the center of attention, Huma is a far more reticent figure.  Whereas Weiner frequently talks straight to the camera and answers questions from the filmmakers, Huma is usually seen in the background, smiling when Weiner is doing well and glaring when he’s not.  There’s not a single scene in the movie where she doesn’t seem to have up her guard but then again, can you blame her?  Unlike her husband, Huma instinctively understands that there’s no coming back from being outed as Carlos Danger.  When Huma eventually leaves Weiner’s campaign so that she can travel with Hillary Clinton, you feel almost relieved for her.  At least she won’t have to put up with Anthony’s bullshit for a while.

Weiner may have originally be envisioned as tale of redemption but instead, it became a story of how a narcissist self-destructed.  Whether that narcissist deserves a third or fourth chance to live up to his potential is a question that the audience will have to answer for themselves.