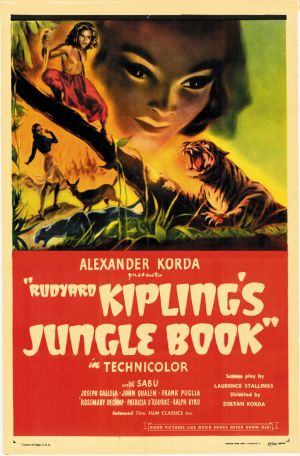 The 9th film in Mill Creek’s Fabulous Forties DVD box set was 1942’s Jungle Book.  Based on the novel by Rudyard Kipling (which was later made into an animated Disney film and of which a remake is scheduled to be released next week), Jungle Book was directed by Zoltan Korda and produced by Zoltan’s brother, Alexander.  Today, the Hungarian-born Korda Brothers are best remembered as being pioneers of the British film industry.  However, during World War II, they relocated their film making to the United States.  Jungle Book was one of the most critically and commercially successful of their American films.

Jungle Book opens in colonial India.  An elderly Indian storyteller is visited by a British woman (Faith Brook) who wants to hear a story from his youth.  The rest of the film plays out in flashback, a structure that allows Jungle Book to walk a thin line between reality and fantasy.  Is the storyteller telling the exact truth or is he exaggerating his tale?  That’s left up to the viewer to decide.  Personally, I chose to believe that he’s telling the exact truth.  It’s more magical that way.

The storyteller starts by telling the woman about the Indian jungle and the animals that live within it.  Some of the animals are kind and some of them are cruel but they all serve a purpose.  The most feared of the animals is a tiger named Shere Kahn.  When a baby disappears from a nearby village, the villagers assume that he, like his father, was killed by Shere Kahn.  What they do not know is that the baby actually wandered into the jungle and was raised by wolves.

The baby grows up to be Mowgli (Sabu), a feral young man who can talk to the animals.  When Mowgli is captured by the villagers, he is unknowing adopted by his real mother, Mesusa (Rosemary DeCamp).  At first, the wild Mowgli struggles to adapt to human ways and one of the villagers, Buldeo (Joseph Calleia), insists that Mowgli has “the evil eye.”

As Mowgli becomes a little more civilized (though he’s never exactly tamed), he starts to fall in love with a Mahala (Patricia O’Rourke).  Unfortunately, Mahala is the daughter of Buldeo and Buldeo is none to happy when Mowgli and Mahala start to spend all of their time exploring the jungle together.  However, that’s before Mowgli and Mahala come across a lost palace that is full of treasure.  When the greedy Buldeo finds out about the treasure, he demands that Mowgli tell him where the palace is.  Driven mad by Mowgli’s refusal to tell him, Buldeo goes to more and more extreme measures to find the treasure…

Jungle Book is a big epic film, one that proudly announces that it was shot in Technicolor.  The sets are big, the live animal footage (as opposed to the stock footage usually used in films like this) is impressive, and it’s just a fun movie to watch.  (Even though I was watching a typically cheap Mill Creek transfer, I was still impressed with the films visuals.)  Indian actor Sabu makes for a charismatic Sabu but the film’s best performance comes from Joseph Calleia, who brings unexpected depth to his villainous character.

(Movie lovers, like you and me, probably best know Joseph Calleia as Orson Welles’s tragic partner in Touch of Evil.)

You can watch the original Jungle Book below!

(Jungle Book is in the public domain so, if the video above gets taken down — as often seems to happen with embedded YouTube videos — I would suggest just going to YouTube and doing a search for Jungle Book 1942.  You’ll find hundreds of other uploads.  I picked the one above because it did not appear to have any commercials.)

One response to “The Fabulous Forties #9: Jungle Book (dir by Zoltan Korda)”