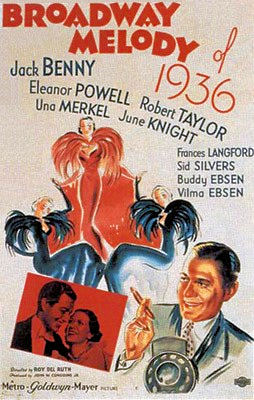 It’s Oscar month and you know what that means!  It’s time for TCM to do their annual 31 Days of Oscars!  For the next 31 days, TCM is going to be showing movies that were nominated for and occasionally won Oscars.  This is a great month for me because it has long been my goal to see and review every single film that has ever been nominated for best picture.  Considering that close to 500 movies have been nominated, that’s no small task.  However, over the past four years, I have definitely made some progress, as you can see by clicking on this link and looking at a list of every single best picture nominee.  Thank you, TCM, for helping me get closer to my goal!

As for what Broadway Melody of 1936 is about … well, it’s really not about anything.  Oh, don’t get me wrong.  The film has a plot.  Irene Foster (Eleanor Powell) wants her former high school boyfriend, Broadway director Robert Gordon (Robert Taylor), to cast her in his new show but Gordon refuses because he doesn’t want the innocent Irene to be exposed to the sordid world of show business.  Fortunately, Irene has some allies who are willing to help her get that role.  Ted Burke (Buddy Ebsen) is an appealingly goofy dancer who, at one point, wears a Mickey Mouse sweatshirt.  Bert Keeler (Jack Benny) is a columnist who rattles off his “New Yawk cynical” dialogue in the style of most 1930s news reporters.

Broadway Melody of 1936 has a plot but it’s not really that important.  The story is just an excuse for the songs and the dance numbers.  And while none of the numbers are spectacular (especially when compared to other 30s musicals, like 42nd Street), they are all definitely likable.

Seen today, Broadway Melody of 1936 seems like an odd best picture nominee.  It’s not bad but there’s nothing particularly great about it.  To truly appreciate the film, it’s probably necessary to try to imagine what it was like to watch the film in 1935.  At a time when the country was still in the throes of the Great Depression, Broadway Melody of 1936 provided audiences with an escape.  Audiences could watch the film and imagine that they, just like Eleanor Powell, could leave behind the dullness of reality and find stardom in the glamorous and glitzy world of Broadway.

Never doubt the power of escapism.